The era of press barons and its harmful effects

The private realm of public figures

The press, in its bid for more “scoops”, has a tendency to invade the private realm of public figures and members of the Royal family, under the veneer of “investigative journalism”. The availability of bugging and telephone tapping devices in the market facilitate the press’s recordings of some shocking private conversation between the Prince of Wales and his close friend, Camilla Parker Bowles and led to the publication of the transcript of the Camilliagate Tapes, though such disclosures has done nothing for the good of British politics.

Don't use plagiarized sources. Get your custom essay on
“ The era of press barons and its harmful effects ”
Get custom paper
NEW! smart matching with writer

Defendants of the press often point out some intrusions proves the fourth estate is working well. For instance, when the press reported that Cecil Parkinson had an affair with his former secretary, he resigned as the Secretary of State for Trade and Industry in 1987; in 1994, Sunday Times revealed that Conservative Members of Parliament (MP) had accepted payments for asking questions in the House of Commons. Eventually, the two MPs were censured, fined and suspended from the House.

However, more often than not, press intrusion has not yield any results that contribute to keeping the government in check.

Rather, it creates an atmosphere of paranoia, which leads to politicians’ unwillingness to make any spontaneous comments, lest they get taken out of context. The press had indirectly killed the citizen’s freedom of speech and hindered the mechanism of democracy. In conclusion, the British press, far from being free, is unable perform the dual roles of acting as a public watchdog and providing inert political communications, while under the control of press barons, thereby harming its democracy.

Subsequently, there had been calls for regulation and censorship of the press, but it is evidently a catch twenty-two situation.

Regulations and censorship of the press

Regulations and censorship of the press will definitely infringe upon the citizens’ “right to know” and contradict principles of liberal democracy, but allowing the press to be free has increased the propensity for it to be abused by its proprietors. At the expense of alternative viewpoints, press barons, with the intention of increasing their economic and political power, come up with biased reports or limit opinions, presenting its readers with either skewed or contrived information. James Curran and Jean Seaton had argued “the press interferes with us; therefore, we have a right and a duty to interfere with the press.”

However, to conduct any form of “fair” intervention is easier said than done. As Lord Acton attested “Power corrupts”, the powers which come with the right to interfere with the press will create such a privileged position that those who possess them might be tempted to abuse it. At the end of “Tomorrow Never Dies”, Elliot Carver was killed by James Bond and prevented from conquering the world. The day was saved. Unfortunately, this is where reality and fiction diverge. The British public has no one to save them from the press obviously manipulated by press barons.

The prospect of the British press facilitating liberal democracy looks bleak unless a policy of press regulations that does not encroach liberal democratic ideals is formulated.

The era of press barons and its harmful effects. (2020, Jun 02). Retrieved from http://studymoose.com/era-press-barons-harmful-effects-12997-new-essay 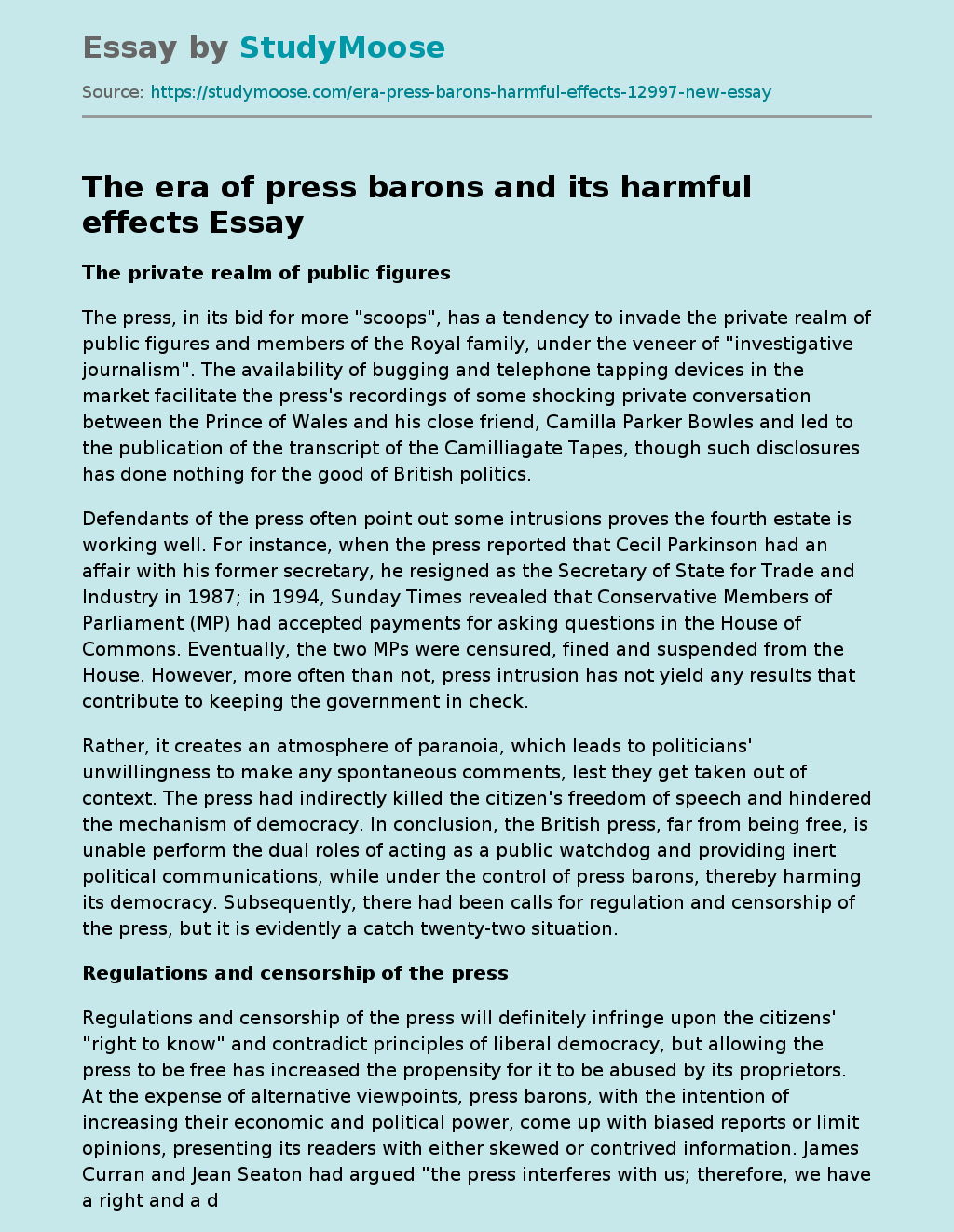