Understand the importance of equality and inclusion

1a. What is meant by diversity

The term ‘diversity’ means difference. Diversity recognises that though people have things in common with each other, they are also different and unique in many ways. Diversity is about recognising and valuing those differences. Diversity consists of visible and non-visible factors, which include personal characteristics such as background, culture, personality and work-style in addition to the characteristics that are protected under discrimination legislation in terms of race, disability, gender, religion and belief, sexual orientation and age.

Don't use plagiarized sources. Get your custom essay on
“ Equality in childcare ”
Get custom paper
NEW! smart matching with writer

By recognising and understanding our individual differences and embracing them, we can create a productive environment in which everybody feels valued.

1b. What is meant by equality

Equality means treating people in a way that is appropriate for their needs. This could mean if someone had say a disability you need to treat them in the same way as you would another person, without showing them up but adapt the help you provide.

1c. What is meant by inclusion

Inclusion is about equal opportunities for all families, whatever their age, gender, ethnicity, attainment and background. It pays particular attention to the provision made for, and the achievement of, different groups of pupils within a school.

1d. What is meant by discrimination

Discrimination is the prejudicial treatment of an individual based on their membership in a certain group or category. For example, religion, skin colour.

1.2 Describe ways in which discrimination may deliberately or inadvertently occur in the work setting Indirect Discrimination: Indirect discrimination occurs when policies and practices, which appear fair because they are applied to everyone, but turn out to disadvantage people and particular groups within society.

For example, if a job advertisement states that applicants must be able to drive then this could put a certain people at a disadvantage, such as those with a disability. Or, for example you may have a school display every year to celebrate Christmas because the majority of the children would be classed as ‘white’ ‘’Christian’, however if other faiths and celebrations are not represented then smaller groups could be discriminated against.

Positive Discrimination: Positive discrimination is regarded as the preferential treatment of members of a minority group over a majority group, either by sex, race, age, marital status or sex orientation. So for example if you were to allow a particular less represented group of children over another to perform a task this is classed a positive discrimination.

Racial Discrimination: If a practitioner has particular views concerning race or even religion, these views could be used in the setting unintentionally to have a negative or positive influence in a situation or particular child.

Stereotypes: A practitioner may intentionally or intentionally categorise children in a particular way. This could be for example, boys play with cars and girls dolls.

0.3 1.3
Explain how practices that support equality and inclusion reduce the likelihood of discrimination

In our setting with religion for example, we try to cover a few with our circle time sessions. Last year we did a topic on Hanukkah, a Jewish festival.

Legislation and codes of practice that applies to own role

There are various pieces of legislation in place to promote equality and reduce discrimination. These include: Race Relations Act 1976 with the Public Order Act 1986 and Racial and Religious Hatred Ac 2006. Children Act 1989 and 2004 and Care Standards Act 2000

Educational Act 1981 together with E.A 1993 and 1996, Special Educational Needs and Disability Act 2001 and Disability Discrimination Acts 1995 and 2005 Equality Act 2006 Laws alone cannot change people’s attitudes, but they can help to risk the practical aspects of discrimination. The Code Of Practice for Children with SEN gives guidance on meeting the learning needs of children with special educational needs. The EYFS guidance explains how to put the EYFS in to action. Good inclusive practice that promotes equality goes beyond what the law commands.

0.3 2.3
Describe how to challenge discrimination in a way that encourages change You should never ignore or excuse such discriminatory behaviour any more than you would ignore or excuse someone if they inflicted physical pain on someone else. It must be addressed because if you do not respond and just let the incident pass you are contributing to the person feeling that it is acceptable to speak or behave that way. To promote change you need to change people’s attitude toward other races, sexuality, religion.. In our setting we try to educate our children about different culture and disabilities by doing things like having time so that children can share their experiences with each other, and encourage them to think of other people’s feelings. They can share different opinions with each other and also get the opportunity to think about what it is like for other people. They are asked to think how they would feel in those persons shoes.

0.3 3.1
Identify a range of sources of information, advice, support about diversity, equality and inclusion It is our duty to protect a child’s rights and to offer them fair chances in life. We need to be able to be open to new ideas in order to develop and improve the way we work. Sources we could use to assist with this are:

0.3 3.2
Describe how and when to access information, advice and support about diversity, equality and inclusion It is a sign of professionalism to recognise when you need additional information, advice and support. It is good to seek support, as struggling alone is not good practice. Equality and inclusion are aspects of practice that are complex and can raise sensitivities. Situations can be challenging and distressing. It is important to seek support and use the experience as a professional learning point. For example, in my setting when I was struggling with a child who I felt needed some speech help and I didn’t know where to turn, I contacted my Manager who is also SENCO trained and she organised a Speech and Language Therapy referral. 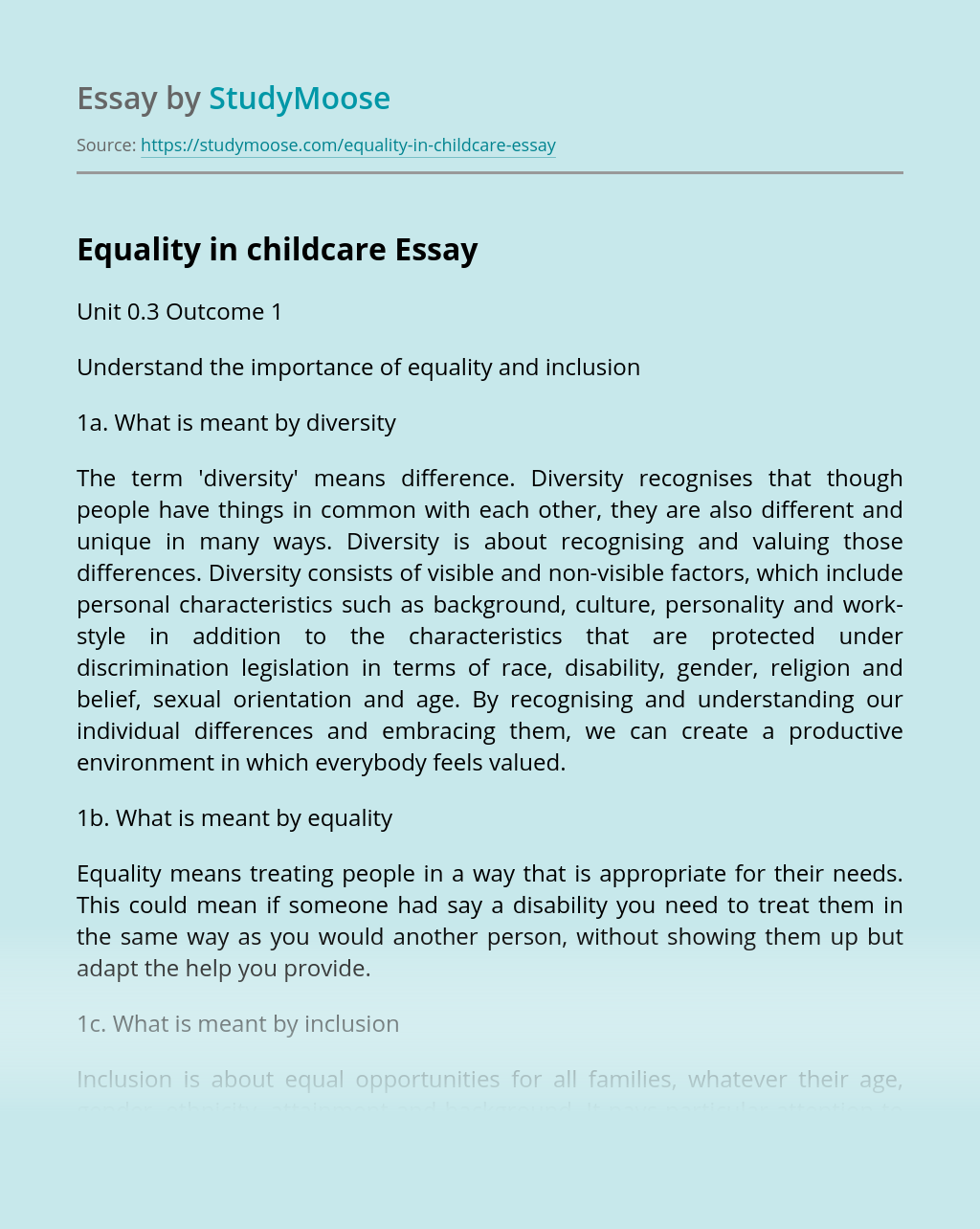