In 2002, Jeffrey Lubell founded True Religion– a brand of premium, vintage-inspired denim. Iconic for its precise fit and bold stitching details, True Religion has grown exponentially as a company and continues to operate according to its mission statement: “…to make quality, American-made, authentic, timeless, great fitting, 1970’s inspired jeans wear, with a trendsetting appeal for today’s consumer” (True Religion Brand Jeans, 2009). The company currently offers a wide variety of apparel and accessories for men, women, and children, and is one of America’s leading designer denim brands.

As the demand for premium denim has risen over the past decade– giving rise to companies such as 7 For All Mankind and Paige Premium Denim– True Religion has remained successful by entering its products into foreign markets. True Religion jeans can be found all over Asia, Europe, and in less-developed countries such as Egypt. It is this global presence that allows the brand to maintain an edge over its competitors. Which foreign market should be entered next? While countries such as France and Italy are typical target regions amongst clothing brands, developing countries with a large tourist industry could be promising as well.

One country in particular shows great potential as a new market for True Religion– Mauritius. An island located off the southwest coast of Africa, the country offers some of the world’s most stunning beaches, diverse people, a cosmopolitan society, and a booming tourist industry; all of which, would be beneficial for launching True Religion Brand Jeans. Officially named The Republic of Mauritius, the political system of the island is a democracy that has been modeled after the British Parliamentary system.

This allows for free elections that take place every five years, and secures a separation of power within the government.

Its legal system is primarily based on the civil law system of France, as well as English common law (Government of Mauritius, 2009). The government’s prominent presence in the Mauritian economy has proved to be extremely effective and beneficial to the country and its people. Several acts have been put into effect to diversify the island’s economy and build upon sectors that are currently successful, while striving to become a modern society with a high standard of living. The success of the country’s political and legal systems are further illustrated by Mauritius having a current real growth rate of 5. %, and being voted as the best-governed country in all of Africa (Government of Mauritius, 2009).

Although developing countries may be perceived as a risky business investment, Mauritius’ economic growth and development through the years have proven otherwise. As the official government website of Mauritius states, “An attractive blend of advantages is offered to international investors. These include: political stability, pleasant and peaceful living conditions, efficient telecommunications, pool of qualified professionals conversant in English and French…” (Government of Mauritius, 2009).

Mauritius has an ultimate goal of modernizing its society– this includes modernizing its retail industry. Introducing True Religion jeans to the country provides the company with an untapped resource and would give True Religion a competitive edge against other premium denim brands. There are many opportunities that developing nations such as Mauritius offer. With a society that wishes to be worldly and up-to-date as well as a tourist industry that brings in people from all over the globe, Mauritius can offer True Religion Jeans an entirely new group of potential consumers, in a new and exciting location. 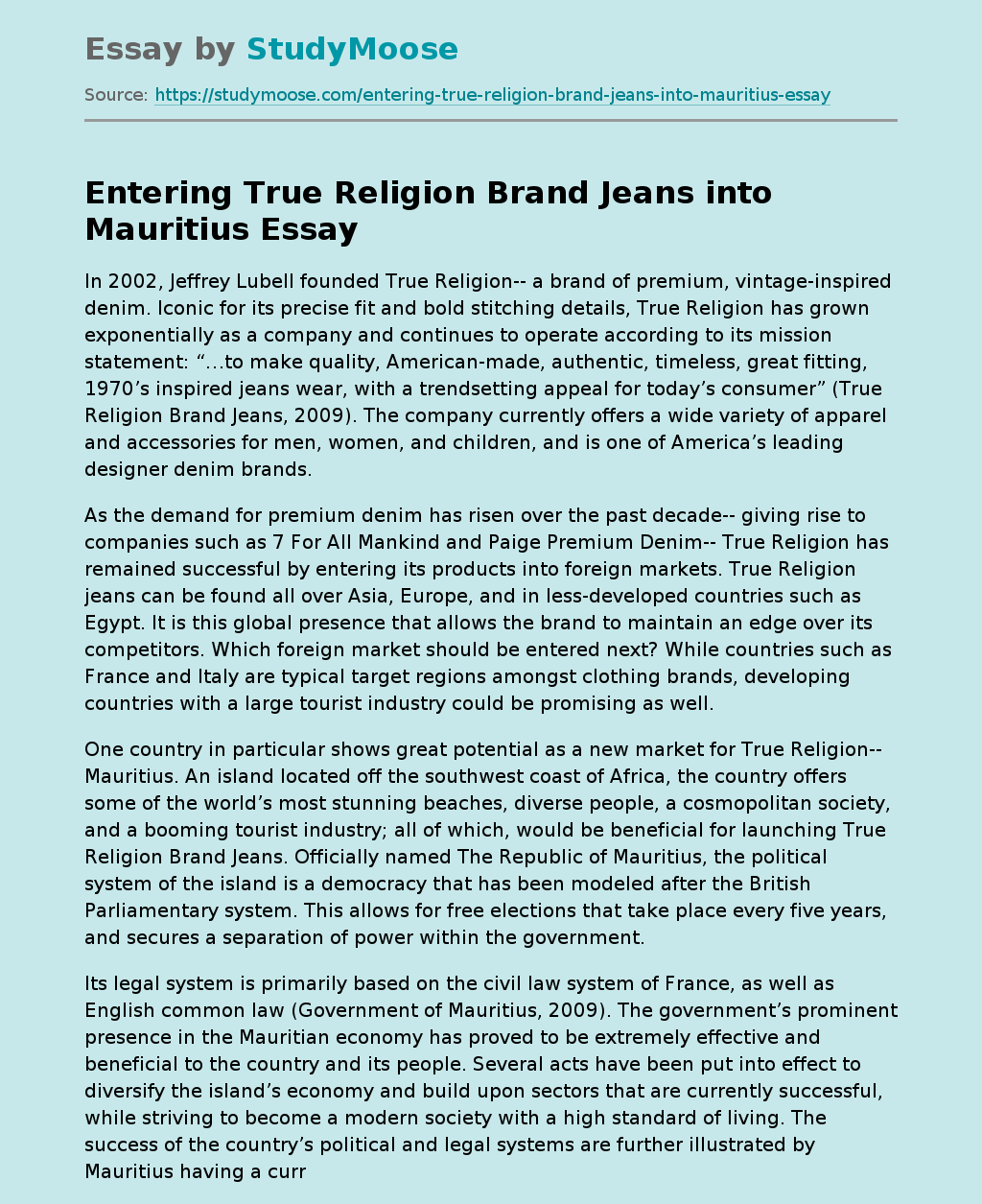