Engaging Youth to Voting in Fiji

The future of our country rests with young people. As Fiji’s election management body, the Fijian Elections Office needs to create a facilitative environment that encourages young people to become active participants in electoral activities, as well as, instill principles of ethical participation in the political process.

Youth aged (18-30) constitute 29 percent of the voting population in Fiji (candidate youth represent 7.23 percent) making them a potent vote bank. The earlier youngsters get into the habit of voting (read: as soon as they become eligible), the likelier it is that the habit of participating in politics and elections will stick with them as they get older.

Don't use plagiarized sources. Get your custom essay on
“ Engaging Youth to Voting in Fiji ”
Get custom paper
NEW! smart matching with writer

Meaning: the lower the millennial voter turnout, the weaker is their ability to influence their own future.

Effective and meaningful youth political participation has one of three attributes.

Firstly, it can be consultative, where young people’s voices are heard in an adult-assigned consultation process, where they have capacities, a mandate and information to fully perform their roles, or through a youth-led advocacy initiative.

Secondly, it can entail youth-led participation, where young people have a direct impact on decision-making within their own youth communities, such as through youth-led, student councils, youth parliaments with competencies and budgets, etc.

Thirdly, it can involve youth collaborative participation, where young people effectively take part in regular political decision-making processes, including as voters, or as members of parliament, political parties or advocacy groups.

Increasing young voter turnout is crucial in getting young voters hooked to the electoral process ethically and early on so that they grow up to be civic-minded, well informed, and responsible citizens.

Using the strategies and techniques suggested above in getting them to vote.

This enables the correct focus and a clear path for the youth in political participation.

Below are the outcomes of a broader research spectrum.

Educating in Schools and Colleges

Teaching students about the importance of voting and the different procedures surrounding elections while they’re in school would clear a lot of doubts and help students be more confident about their voting rights.

The Fijian Elections Office can hold these “lectures” outside school hours and have friendly discussions about voting and elections, and can answer related questions.

Nevertheless, there is an association between level of schooling and the intensity and nature of political participation. Younger Fijians who attend university, in particular, are more likely to be interested in social issues and are more politically involved.

Specifically, youth who attend university are the most likely to

Organizing Rallies with a Festive Atmosphere

Mobilization through sports, Music and drama can be viable entry point to bring about change and ensuring young people are heard, US eg – Bernie Sanders was extremely successful in mobilizing youth in the 2016 elections to vote for him. One of the main reasons for this was the way his rallies and campaign speeches were organized: loud, with plenty of music and a fun carnival atmosphere. His rallies not only inspired youth but were also fun to attend.

So The Fijian Elections Office can action it as an awareness drive or a voter registration event, organize the event in a way which gives it a fun and friendly vibe. Getting the Civic partners to set up stalls and invite passersby to the event by handing out flyers and leaflets. Of course, promoting the event in advance on social media and send ing text reminders to people so that decent attendance is attained.

The above has shown to have the highest impact when mobilizing young voters. When canvassing, FEO Reps will essentially be having a friendly conversation with the person at the door as opposed to forcefully trying to convince them to vote. Ensuring that The Fijian Elections Office reps canvas in areas and neighborhoods that are known to have a high density of college students; dorms and hostels make sense too.

It’s no secret that pop culture plays a significant role in influencing youth, and I t certainly proves beneficial when getting millennials to vote. By partnering with youth-centric brands, The Fijian Elections Office can vastly increase its reach among youth voters. These are brands that youth already relate to and have grown to trust. By channeling that trust into our cause, The Fijian Elections Office will stand a much higher chance of connecting with younger voters.

For instance, Civic Nation’s #VoteTogether campaign, an initiative aimed towards increasing voter participation by hosting parties, barbeque events, and parades near polling locations partnered up with MTV to target youth voters. This is a potential for The Fijian Elections Office to definitely consider similar partnerships to rally and mobilize youth into voting.

While we’ve talked about educating youth themselves, studies have claimed that the voting habits of parents have a significant impact on whether their children vote or not.

The Ugandan scenario – So target the root cause of the problem. Organizing seminars and events in areas such as low -income neighborhoods with a proven track record of low voter turnout amongst parents and middle-aged people. Informing them about the significance of actively participating in the electoral process and how their actions (or non-action, in this case) affect their children’s mindsets. If the barrier to voting is a lack of information regarding the voting process, ensure that The Fijian Elections Office disseminate s the complete know-how among parents while clearing doubts and answering queries.

Younger voters told UK and EU that they experienced information overload, and struggled with biased reporting in the runup to the referendum.  Whilst media regulations in Fiji cover balance reporting and ethical aspects of reporting, the regulators need to be vigilant and active in preventing any such instances at even the surface level, this includes any fiction analysis.

In the German voting system, young people have a range of options from which to choose. Whilst The Fijian first past the Post’ system is best suited to our nation, reviews need to be done to adopt changes so that every vote counts, currently candidate who is not elected, his or her votes do no have any weight at the end of the Electoral process, as such in my view those votes are wasted or have no value or weight. This area needs attention.

An option mired in controversy, but one that would certainly get young people into the ballot box. Whilst this had been introduced in Fiji in the past, reassessment has to be done, this venture by regulators or Government can also have a very severe effect in the election outcome.

The level of trust on the online platform, and the integrity of electronic voting differs in different countries, whilst this is not wise to be introduced in Fiji soon, it is imminent. A strategic move by the Fijian Elections Office on a long term plan will eventually be realized.

This is an option for The Fijian Elections Office, no example of proven effective outcome is evident, however this will only be applicable whereby the younger voters are off the school or university and not working in weekend.

Return to a politics of ideology

Young people prefer issue-based politics to party politics, yet there are hardly any ideological politicians left, and those that do act out of principle or ideology are mercilessly mocked by the press. The young voters are heavily following the livelihood issues than politics of Race and Religion in Fiji, hence at the eve of elections, voters are lured by archaic and radical views of extremists who use these issues as lifelines to sway votes in favor. Media is biased towards these extremists, hence even though we have Laws in place, authorities need to be stringent.

The Scottish referendum that 16 – and 17 -year -olds are perfectly capable of involving themselves in important political decisions. This is an option but not b est for Fiji, however, legal framework needs to acclimate this change.

Civic engagement, although not necessarily political, may also affect the well-being of communities and society. Various studies have shown that participation in volunteer associations can foster the political participation of individuals. Furthermore, the rate of civic engagement of youth increased over the decade (contrary to some non -electoral political activities In 2017 survey by the UN, youth were particularly inclined to participate in sports or recreational organizations; cultural, educational or hobby organizations; and school groups or neighborhood, civic or community associations.

Conduct short regular discussions with young people thinking of leadership positions, e.g. Use mobile phones and the internet to create leadership communities that can share ideas, party news and information.

One such as the Parliamentary outreach support by UNDP in Uganda UsPeak in also in Uganda, and Australia’s vote flux (that bridges the gap between the closed doors of parliaments and the public should be encouraged to increase the space for participation by youth. Participation in group activities or meetings and volunteering. Youth, in addition to being more likely to belong to groups, also participated in them more regularly.

In the FEO context, Provincial, Community and village level engagements can have positive impact. Improving gender/youth representation and the Politics of presence. This may be achieved in a number of ways; for example, steps can be taken to establish quotas, to develop all-female candidate shortlists, and to ensure a more equal presence for women and lower socioeconomic groups in youth wings of political parties and youth representative bodies (such as youth parliaments and councils).

Measuring Success of the Initiatives

Initially the level of engagement of young people in such either, awareness, education and information or public relations activities conducted by the FEO. An increase in turnout and inquiries even at Voter Service Centers is an indicator of success of the initiatives.

Secondly the number of young eligible voters that are registered and those who actually vote.

Thirdly, the level and number of youth quota positions that are filled if accommodated in the legal framework.

Finally, beyond the numbers of representatives, we should look at the policy issues that have been influenced. These should be clearly documented with the results achieved. If one is advocating for budget allocation for maternal health, s/he should be able to follow through, how much is allocated, how much is spent on maternal health and what change has it caused – impact.

The presence of young people in decision-making positions benefits all citizens and not just youth. While young people often play central and catalyzing roles in movements for democracy around the world, various studies show they are less engaged than older generations in voting and political activism.

The above paragraphs look at strategies EMB/s can use to increase youth voter engagement and turnout. Whilst some are suggested n a broader spectrum, not all are applicable to FEO as an EMB, this is due to the unique political structure in Fiji.

Engaging Youth to Voting in Fiji. (2019, Nov 23). Retrieved from https://studymoose.com/engaging-youth-to-voting-in-fiji-essay 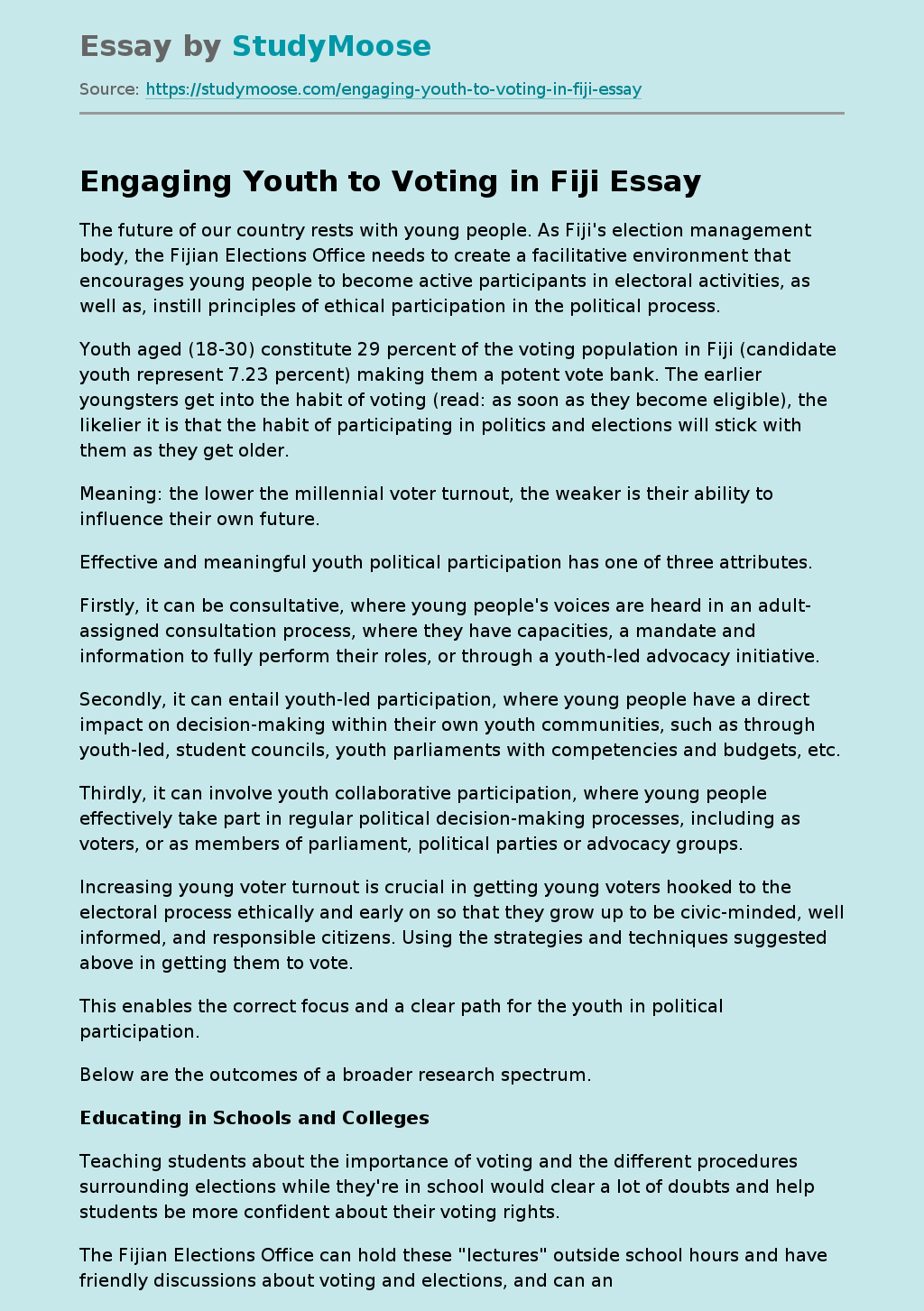