Don't use plagiarized sources.
Get Your Custom Essay on Case Study of Classroom Environment of Foreign and Local Students at Fiji Just from $13,9/Page

While Rivlin and Rothenberg (1976) found that teachers do not seem to know how to arrange the furniture. Therefore it is important for a teacher to design his/her classroom in such a way that it is able to cater for all the students needs. One such way outlined by Sturt is that we can arouse students’ interest by having interesting wall displays and exciting objects around to make a complex environment. Although it is sad to note that classroom decoration is given the least concern especially at tertiary level and it’s high time that it is given more importance now.

Desk placement methods: Moreover, the arrangement of desk is one of the common and most influential factors of classroom environment. Studies reveal that some teachers prefer to seat students in U shaped settings so that they can make eye contact with every student (Shalaway: 2011). Another research done by Holley & Steiner, (2005) revealed that seating arrangements that allowed class members to see everyone such as sitting in a circle contributed to the creation of a safe space. In respect to my research, the seating arrangement of foreign students’ classroom is generally in a U shape that facilitates ease of mobility and group interaction. While the classroom of local students at FNU Nadi Campus, has desk arranged in single and double rows that mostly cater for independent work. Contrary to that, in the research carried by Holley & Steiner (2005) students had stated that row-style seating was a characteristic of an unsafe classroom. Thus the desk placement should be such that it allows group interaction but at same time is able to cater for independent work as well.

Environmental preference: Lighting Moving on, there are certain environmental preferences that affect classroom environment. One of them is the amount of light or lighting in classroom either its natural light (sunlight) or artificial- such as light bulbs. “Light is one of the elements of the immediate environment that affects some students’ ability to learn” (Burke & Burke-Samide: 2004: 236). The writer also states that those who preferred bright light performed better when tested in brightly lit classrooms. While students who preferred dim lights performed better in dimly lit atmosphere. Therefore it is wise to have ample light that best suits the need of everyone. In my research the classrooms of foreign students are normally lit by artificial lighting while classrooms of local students usually use natural lighting. This shows that lighting preference differs from classroom to classroom. Although, it is advisable for teachers to adjust the classroom lights according to the students preferences to help facilitate learning.

Temperature Likewise, temperature is another environmental preference that differs in classroom environment situations. Research on the environment element of temperature reveals that most students prefer a warm yet comfortable instructional climate (Burke & Burke-Samide: 2004: 236). While Pepler (1972) found that non- air conditioned schools in the summer produced a wider distribution of test scores (variance) compared with air-conditioned schools. This aligns with my research as the classrooms of foreign students have air condition to control temperature while the local students of FNU Nadi Campus bear the heat of the normal climate. Therefore, it’s likely that the temperature either extremely hot or cold can affect student performance and productivity.

Overcrowded classrooms Furthermore, overcrowding in classrooms in general affects the classroom environment. As Baron & Rodin (1978) found that as class size increases, so does learned helplessness. Students in large classes have less opportunity for the teacher to give personal praise and thus it leads to learned helplessness. Therefore classrooms should be such that it is able to cater/accommodate the required number of students. In respect to my research, the classrooms of foreign students are just big enough to accommodate small groups of a maximum of 8 students while classrooms of local students which are large enough to accommodate 40 students at a time usually get overcrowded because of lack of big airy classrooms and tutors have to cater for over 80 students at a time in the same classroom. Hence classroom size should be large enough to cater for everyone’s needs.

Noise Last but not the least; noise is one of those major elements that affect classroom environment. “Sound is an element of the environment that can affect academic achievement” (Opolot- Okurut: 2010: 267- 277). Studies conducted by Sturt (n.d), surveyed children in elementary schools that were beneath the flight path for Los Angeles International Airport and compared it with children in quieter classrooms. It was found that children in noisy schools had higher blood pressure and were more distractible compared to children in quieter classrooms. Likewise, Bronzaft and McCarthy (1975) studied children taught in classes on either side of a school. One side of the school faced a noisy railway track and it was found that 11% of teaching time was lost on the noisy side and reading ability was down compared to children on the other side. This suggests that noise indeed affects students’ ability to learn. With respect to my research, classrooms of foreign students are enclosed hence there is very little chance of noise disturbance while classrooms of local students are fairy open hence a lot of noise gets generated within and outside of the classroom.

To conclude, it can be said that certain environmental factors such as classroom space, desk placement methods, light and temperature preferences along with overcrowding and noise in classrooms affect the general harmony of the classroom environment. From the literature findings I can suggest that things such as decorating classrooms will help make students energetic and enthusiastic towards learning. Also desk should be arranged in such a manner that it propagates both individual and group discussions. Similarly, educators should be considerate of students’ preferences of light and temperature. While at the same time avoid overcrowding and noisy situations in class. Hence in the long run it will help educators to wisely spend their investments in upgrading facilities as they will be able to analyse the impact of different environmental features so that students, faculty and universities get the most benefit from the spending.

Case Study of Classroom Environment of Foreign and Local Students at Fiji. (2016, Sep 18). Retrieved from https://studymoose.com/case-study-of-classroom-environment-of-foreign-and-local-students-at-fiji-essay 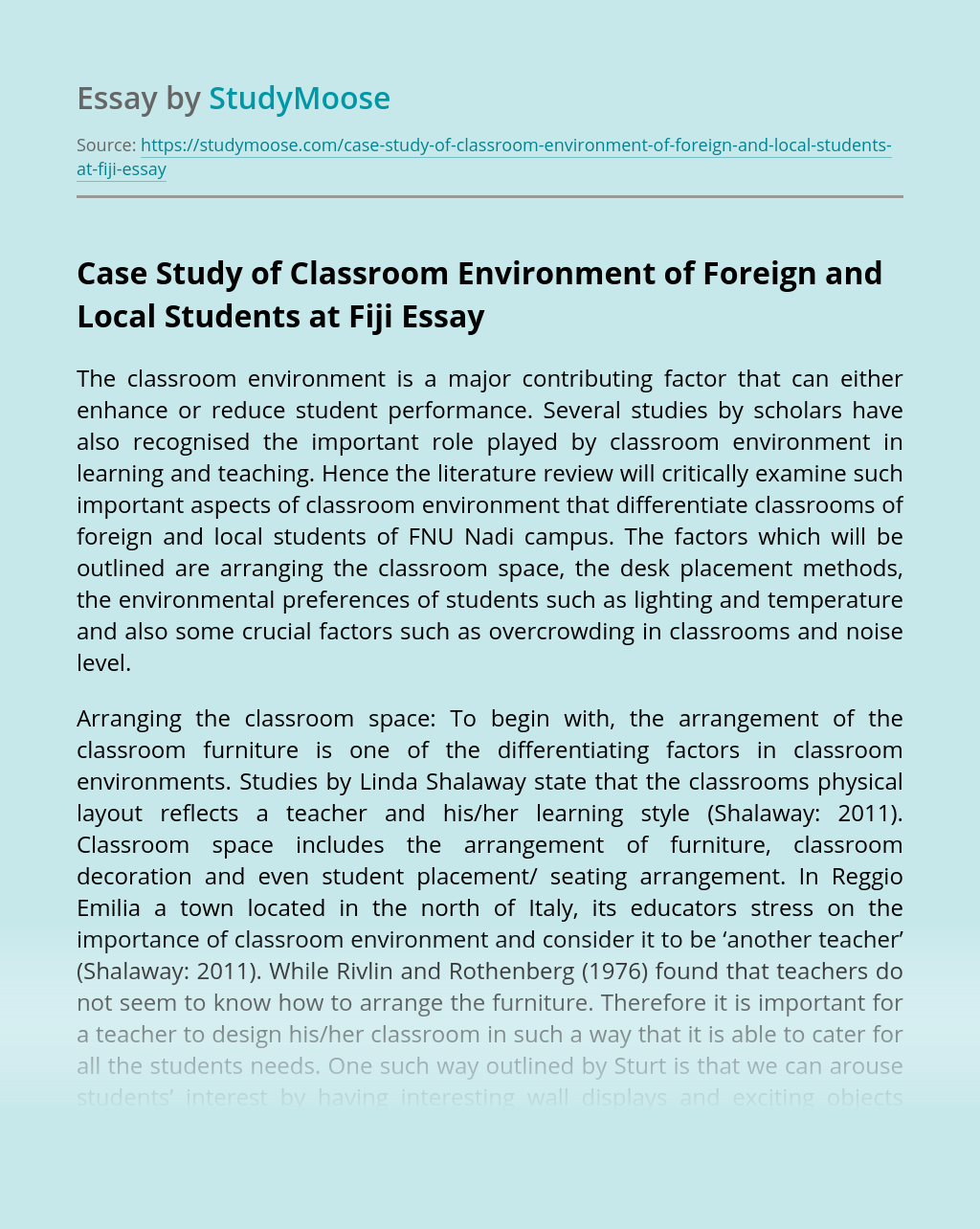 Between the settlement at Jamestown in 1607 and the Treaty of Paris in 1763, the most important change that occurred in the colonies was the extension of British ideals far beyond the practice in England itself. Changes in religion, economics, politics, and social structures illustrate this Americanization of the transplanted Europeans. By 1736, although some...

Social Class and the Hidden Curriculum of Work

Speaking from my own personal experiences I would have to agree with researcher Jean Anyon’s views on the correlations between social class and education. i attended an elementary school in North Philadelphia with children from mostly low income families. I attended secondary school in an affluent upper middle class community. There is definately a difference...

Get Essay
A Personality of Mark Zuckerberg

Mark Zuckerberg is the Founder, Chairman, and Chief Executive Officer of Facebook. Zuckerberg started Facebook in 2004 at the age of 19 from the confines of his Harvard dorm room. Facebook has grown from a college students only craze to the leading social networking sight around the globe. Mark later dropped out of Harvard and...

4.3.1 Introduction Antimicrobials are drugs containing antifungal antibiotic, antiallergic, antivirus etc. properties. Misuse, overuse of these drugs and by the condition of environment microorganisms are becoming resistant resulting a world health problem. It is associated with an increase in mortality1. Therefore there is an essential need for new potent antimicrobial drugs treat life threatening diseases....

The essay written is about the excerpt “What’s Your name, Girl?” and on how Marguerite Angelou shows the importance of names. There are many way on how our names serve us. One of the most visible ways a name serves us is that it gives us personality. In the story read, there was emphasis on...