An article from The Philippine Star dated August 7, 2012 by Louella D. Desiderio entitled “Businesses urged to use Internet to push products”. It shows that businesses are advised to use the Internet for promoting their products and services as more consumers are going online to research before making purchases. Companies should consider using online advertisements for the products and services they offer as more and more people are using the Internet to research goods they plan to buy before making the purchase.

It also states that in the Philippines, the study showed that around 70 percent of consumers first make a research of their purchases online even if they purchase offline. This trend shows the potential of growing the business by going online.It is related to the study because it informs businesses that online advertising is very effective. It also shows that whether small or big businesses, they can easily have the benefits of online advertisements of reaching users at a time of relevance anywhere Local Study

A research study conducted by Jean Louisse Villanueva Concha and Jossa Kristine Cruz Soler from University of the Philippines Diliman on April 2012 entitled “The Rise of Online Advertising and its Impact on the Future of the Philippine Newspaper”.

The researchers conclude that online activity has reached an unprecedented rise owing to the popularity of social networking sites and the easier accessibility to computers and the internet for more people. As such, and with more methods of interactive and efficient advertising available online.

It is related to the study because online advertising is really popular to business and to audience or customers because it’s more easy to spread online ads than newspaper which will be more helpful to businesses also.

An article from Web Designer magazine dated 2013 by Steve Jenkins entitled “Pay As You Go Advertising”. It shows that for most types of advertising, advertisers pay for people to see the ad. With Google Adwords, the advertiser only pays when someone clicks on the ad and visit the website of the business. The advertiser have complete control of adjusting or customizing the ad campaigns like how much to spend, who sees the ad, and where and when the customers see it. It is related to the study because it tells about Google Adword which will be of much help to advertisers and the business itself. It also shows that it is easy for advertisers to make an ad campaign of the business because they have the complete control and also help the business to be popular.

A research study conducted by Shuai Yuan, Ahmad Zainal Abidin, Marc Sloan and Jun Wang from Cornell University of Ithaca, New York on June 2012 entitled “An Interplay among Advertisers, Online Publishers, Ad Exchanges and Web Users”. The researchers conclude that Internet advertising is a fast growing business which has proved to be significantly important in digital economics. It is vitally important for both web search engines and online content providers and publishers because web advertising provides them with major source of revenue. Its presence is increasingly important for the whole media industry due to the influence of the web.

For advertisers, it is a smarter alternative to traditional marketing media such as TVs and newspapers. As the web evolves and data collection continues, the design of methods for more targeted, interactive, and friendly advertising may have a major impact on the way our digital economy evolves, and to aid societal development. It is related to the study because Google online advertising is one of the internet advertising in which it helps lots of businesses. Since Internet advertising is a fast growing business, it also help the economy.

An article from HBS Working Knowledge dated August 17, 2009 by John Quelch entitled “Quantifying the Economic Impact of the Internet”. It shows that Businesses around the advertising-supported Internet have incredible multiplier effects throughout the economy and society. Ironically, online advertising and the commercialization of the Web achieved important goals of the resisters mostly to preserve the Web as a medium for free publishing and communications. The Advertising-Supported Internet also helps the economy by fostering innovation, entrepreneurship, and productivity. It is related to the study because it represents the impact of advertising in the economy by stressing how effective is online advertising and how online advertising helps the economy. Advertising through internet also has given lots of benefits to businesses and also our economy.

Increasingly innovative types of advertising are coming into existence as the Web matures. The major types of online advertising are banner ads; text ads, interstitials, pop-ups ads, opt in mailing, HTML ads, and rich media ads. It is related to the study because it represents that internet is rapidly growing instead of other forms of advertising. Because of online advertising, lots of companies or businesses have grown and became more popular since advertisements were advertised globally and can be seen by lots of people because of the web.

A dissertation conducted by Bharat Vyas. Nanduru from University of Westminster in London, United Kingdom on August 30, 2012 entitled “Measuring the Effectiveness of Online Media Advertising”. The researcher concludes that Advertising resources assigned to internet media have grown dramatically over the past few years. This growth is suggestively driven by search and performance. Measuring online advertising effectiveness is a very intricate process particularly in an ever changing environment where new resources are constantly developed every passing day. It is related to the study because online advertising like Google Adword have grown and help businesses to deliver more information to the potential customer at a relatively low cost.

A research study conducted by Minchul Kim from University of Wisconsin-Milwaukee, United States on August 2013 entitled “The Effects of Online Advertisements and News Images on News Reception”. The researcher concludes that in recent years, a growing number of people have considered the Internet to be their major source of news. In contrast, the number of subscribers to traditional newspapers have decreased drastically so has the advertising revenue for the newspaper industry.

The decrease in adverting revenue for the industry increases the dependency of online news services on online advertising revenue which perpetuates the symbiotic relationship between the newspaper and advertising industries for audiences’ eyeballs in the era of the Internet. It is related to the study because online advertising is one way of attracting new customers and to spread advertisements easily. Google Online Advertising and other online advertising program became useful nowadays because a lot of people were using the internet. 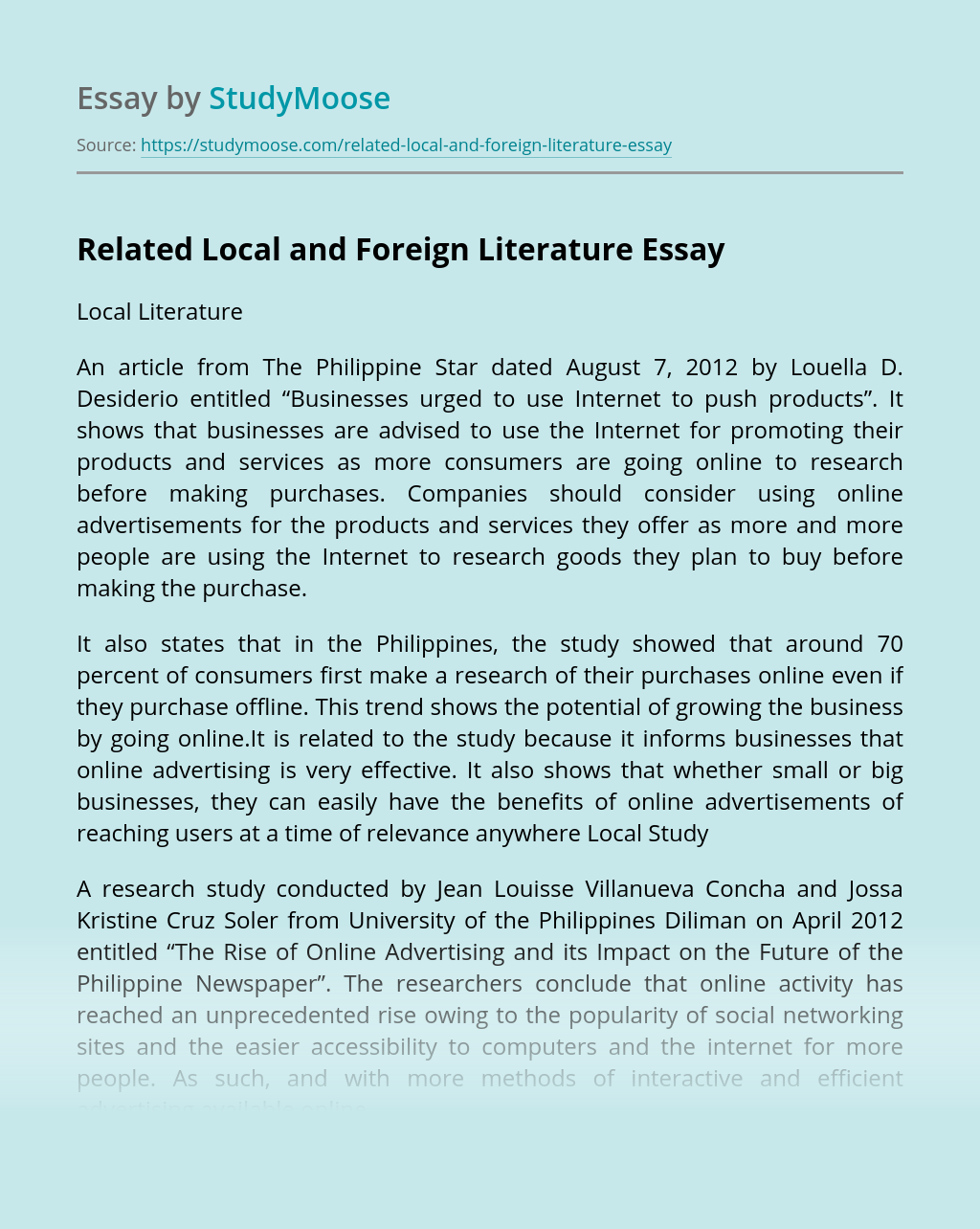 The Effect of the Internet on the Newspaper Industry

The Effect of the internet on The Newspaper Industry’s Revenue Introduction        The newspaper industry is of late facing financial crisis as a result of the rising competition facilitated by news outlet on the global network, that is, the internet. The internet has changes of how people choose to access information. In 2012...

Get Essay
Discuss the Advantages and Disadvantages of Advertisements

Topic: “Advertisements do more harm than good. ” Discuss. In general, advertisements promote products or services to the public. Advertisers use all sorts of gimmicks to promote their own product. For example, fast-food restaurants promise attractive toys and prizes in “scratch and win” competitions. As a result, children badger their parents to take them to...

Is Google Making Us Stupid by Nicholas Carr

In his article, “Is Google Making Us Stupid,” Nicholas Carr, a former executive editor of the Harvard Business Review and a member of the steering board for the World Economic Forum’s cloud computing project, criticizes the overall impact of the internet, as a whole, on the human process of thought, comparing his past level of...

Reading Newspaper As A Habit

Human being is a much habituated species. It is not free from habits. If any human being continues to perform one thing in a repeated manner, then he/she becomes habituated to that particular task. There is hardly any human being who is free from this mentality. Thus both good and bad habits are formed. So,...

The Role and Influence of Mass Media

Mass media has the capability to influence people to think based on the media concepts that have been presented to them. In thousands of images that people see on media sources everyday, the strong recall of each image leave marks on the minds of the viewers or readers which often lead to the conclusion that...

The key to the increase of freelance and powerful newspapers

The key to the increase of freelance and powerful newspapers within the u. s. within the nineteenth and early twentieth centuries was their role as market intermediaries–that is, in connecting giant numbers of sellers (advertisers) and consumers in an exceedingly native space. That role needed changes in content, language, and design, to charm to a...