A cash flow statement is an important indicator of financial health because it is possible for a company to show profits while not having enough cash to sustain operations.

Don't use plagiarized sources. Get your custom essay on
“ Related Literature to the Cash Flow Management ”
Get custom paper
NEW! smart matching with writer

It is a financial report that shows to the user the source of a company’s cash and how it was spent over a specific period of time. A cash flow statement counters the ambiguity regarding a company’s solvency that various accrual accounting measures create.

The cash flow statement also tells the reader how much money was spent for items that do not appear on the income statement, such as loan repayments, long-term asset purchases, and payment of cash dividends (Ryan 2007).

Review of Cash Flow Failure Prediction Studies The relevance of cash flow information for predicting bankruptcy was highlighted by Beaver (1966).

Beaver (1966) reported that cash flow from operations (CFFO), proxied by net income plus depreciation, depletion and amortisation, to total debt had the lowest misclassification error relative to common accrual measures of financial health. However, his univariate approach to analysing financial distress was seldom followed because while ne ratio would indicate failure another could indicate non-failure. Altman (1968) overcame this problem through the use of multiple discriminant analysis (MDA) that simultaneously considers financial ratio indicators of corporate health.

Altman (1968) did not examine the value of cash flow information though. Deakin (1972) demonstrated employing MDA that cash flow to total debt was a significant predictor up to three years prior to failure. Like Beaver (1966), Deakin (1972) defined cash flow as net income plus depreciation, depletion and amortisation. While other researchers (e. . Blum, 1974; Norton and Smith, 1979; Mensah, 1983) have shown that cash flow information contains information content in predicting corporate bankruptcy, they are not frequently cited. The rare citation is probably due to the measure of cash flow employed by these researchers. These researchers used Beaver’s (1966) definition of CFFO. Table 1 summarises the research findings of the cash flow failure prediction literature to date. Largay and Stickney (1980) recognised the limitation of using net income plus depreciation, depletion and amortisation (NIDEP) as a measure of CFFO.

They demonstrated based on the infamous W. T. Grant Company bankruptcy that NIDEP more correctly reflected working capital from operations. To determine CFFO one had to adjust for changes in current assets and current liabilities other than cash. Largay and Stickney’s (1980) more refined measure of CFFO indicated that W. T. Grant’s cash from operations was negative in eight of the ten years prior to failure while NIDEP was relatively steady until the year immediately prior to its demise. This finding renewed interest in CFFO as an indicator of corporate failure.

Lee (1982), a strong advocate of cash flow reporting, showed that the fall of Laker Airways was foreseeable on a cash flow basis. His analysis of CFFO revealed that Laker Airways was in financial trouble three years prior to failure while profits were increasing as failure approached. A stream of multivariate modelling studies began investigating the information content of this refined measure of CFFO. Using an estimation sample and a validation sample comprising 60 bankrupt and 230 non-bankrupt firms and three measures of cash flow information, viz.

CFFO, CFFO/Current Liabilities and CFFO/Total Liabilities, Casey and Bartczak (1984; 1985) concluded that none of the three operating cash flow variables significantly improved the classification accuracy of the six accrual ratios model. Casey and Bartczak (1985) reached this conclusion on the basis of the number of firms correctly classified into their respective groups. While their conclusion is valid, there are grounds to argue that cash flow information has significant information content over accrual information in assessing the predicted probability of failure.

Predicting the probability of failure extends the mere classification into either the failed or nonfailed group and is practically more useful. For instance, the classification of a company into a non-failed group does not provide information on the likelihood of this group membership. Consistency Principle Consistency Principle is one of the four major principles that are used for estimating the project cash flows. According to this principle, consistency in the cash flows is very necessary. At the same time, consistency in the applicable discount rates on the cash flows should also be maintained.

There are two important factors that are related to the Consistency Principle. These two are the investor group and the inflation. Investor Group: The Consistency Principle holds that while estimating the project cash flow, it is also important to consider the investor’s opinion or view. There are different types of investors in a firm like the lenders or the stockholders and so on. Again, if it is not possible to consider every kind of investors’ view, then the stockholder’s view regarding the cash flow may be considered.

According to the investor’s standpoint, the project cash flow denotes that amount of cash that is provided to the investors. The payable taxes must be deducted from this amount and if there is any need for investment in the ongoing project then that amount should also be deducted from the amount allotted for the investors. At the same time, if the stockholders standpoint is regarded then the project cash flow is that amount that is offered to the stockholders. This amount should not include any kind of payable tax or any such amount that is necessary to invest in the particular project.

Another way of handling the inflation factor is to calculate the project cash flows of the future in real terms with real discount rates. Cash flow estimation is a must for assessing the investment decisions of any kind. To evaluate these investment decisions there are some principles of cash flow estimation. In any kind of project, planning the outputs properly is an important task. At the same time, the profits from the project should also be very clear to arrange finances in a proper way. These forecastings are some of the most difficult steps involved in the capital budgeting.

These are very important in the major projects because any kind of fault in the calculations would result in huge problems. The project cash flows consider almost every kind of inflows of cash. The capital budgeting is done through the co-ordination of a wide range of professionals who are going to be involved in the project. The engineering departments are responsible for the forecasting of the capital outlays. On the other hand, there are the people from the production team who are responsible for calculating the operational cost. The marketing team is also involved in the process and they are responsible for forecasting the revenue.

Next comes the financial manager who is responsible to collect all the data from the related departments. On the other hand, the finance manager has the responsibility of using the set of norms for better estimation. One of these norms uses the principles of cash flow estimation for the process. There are a number of principles of cash flow estimation. These are the consistency principle, separation principle, post-tax principle and incremental principle. The separation principle holds that the project cash flows can be divided in two types named as financing side and investment side.

On the other hand, there is the consistency principle. According to this principle, some kind consistency is necessary to be maintained between the flow of cash in a project and the rates of discount that are applicable on the cash flows. At the same time, there is the post-tax principle that holds that the forecast of cash flows for any project should be done through the after-tax method. What is Time Value of Money? Time value of money is the basis of discounted cash flow analysis in finance. It is one of the core principles of small business financing operations. It as to do with interest rates, compound interest, and the concepts of time and risk with regard to money and cash flows. The underlying principle of time value of money is that the value of $1 that you have in your hand today is greater than a dollar you will receive in the future. Time value of money includes the concepts of future value (compounding) and present value (discounting). For example, if you have money in your hand today, you can save it and earn interest on it or you can spend it now. If you don’t get it until some point in the future, you lose the interest you could earn and you can’t spend it now. 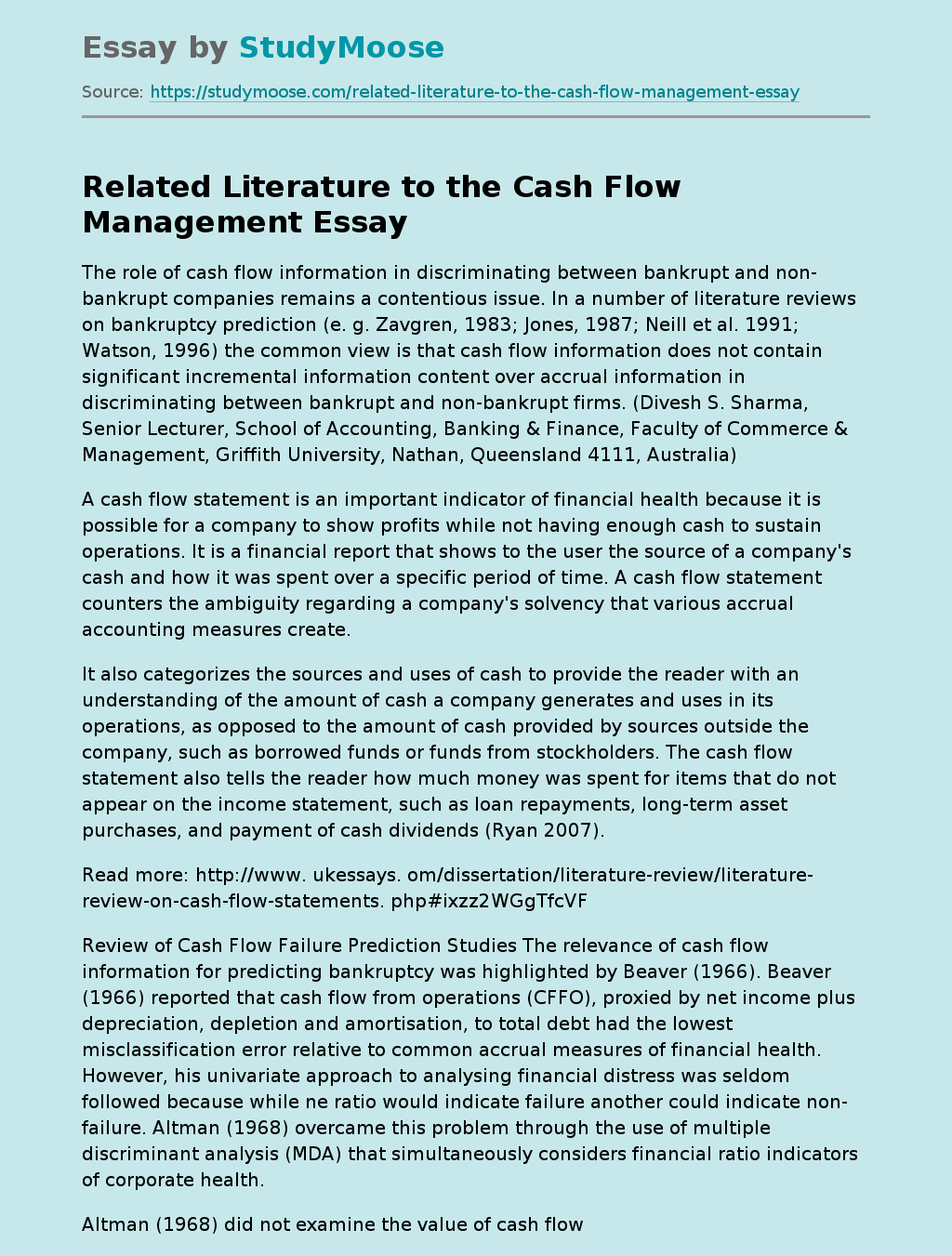