In the 1950’s women were given the role of wife and mother. They were expected to cook and clean. Even today some of the inequalities from the past shine through in clothes, colors, and taxes. Some women are only making 77% of what men are making and paying for more taxes on necessity items. Gender roles, stereotypes and unfair differences negatively affect women and men both. It is important to eliminate these inequalities in America.

Gender roles are the expectation of how a certain gender should act or look.

Don't use plagiarized sources. Get your custom essay on
“ Eliminating Gender Stereotypes ”
Get custom paper
NEW! smart matching with writer

This could influence job choices, clothes options, and even beauty standards. Women are expected to be kind sweet and gentle. Pink is a color that often goes along with these traits while men are supposed to be brutish strong and crass. Blue has become the color for men to wear. Many people feel like they are left out from these standards and make people feel bad and insecure about themselves. These gender roles affect beauty standards and negatively impact people for not looking like the ideal image of a man or woman.

In the Book of Etiquette By Emily Post written in the 1950’s said that when being asked out on a date the Man must take the initiative and the girls should not make a move first. Many people argue that gender is just something your born with and all women want to be a homemaker and men are naturally strong. However it has been proven that gender is a social-construct created by society and these images are false thoughts of a much different reality.

Just as not all women love to cook not all men want to be insensitive. These ideals came about in a time where life was much more challenging and these roles were more needed, but even in those times did more harm than they did good.

Many women of the past were housewives and while their husbands worked they cooked, cleaned and took care of the kids. In an episode of I Love Lucy she says she hates being a housewife and describes it as boring and dull. Her husband has no gratitude for her efforts and instead makes fun of her. She even compares being a housewife like being in jail.As well as that since women didn’t have jobs their husbands would give them an allowance to go grocery shopping and anything else they might need. Many women to this day experience the gender role stereotypes through the work opportunities. Although many more women go to college they tend to end up going into traditionally feminine career paths. According to Gender discrimination is at the heart of the wage gap by Anthony P. Carnevale and Nicole Smith Women represent 97% of early-childhood education majors but only 6% of mechanical engineering majors”.

Although more women have gone to college than men in the past few years. There has also been studies of people with the same prerequisites getting the same job and thus the wage gap is exposed.Women also choose their majors and career path through the influence of people around them. Ideas that society had put into girls heads, movies and television, peers, and family contribute to the decision many women will make. Female dominated career paths also tend to pay less.

According to Gender Discrimination is at the Heart of the Wage Gap by Anthony P. Carnevale and Nicole Smith “Women earn 77% of what men make. Even after accounting for the fact that women often work in different occupations and industries than men, as well as differences in work experience,union status,education and race, 41% of that gap is still unexplained.” We began to close the gap in the 70’s and 80’s but it slowed down in the 90’s. It is possible to fix the gap. For example in Washington D.C women make 90% of what men make but in Colorado women make 65% of what men make. We have even passed laws like the Paycheck Fairness Act which protects women trying to start a family from being discriminated against by less wages. However that is not the only way women are hurt by money.

There is something called a pink tax. As we discussed earlier pink things are targeted mostly towards women. They also tend to be much more expensive than other products. Many corporations claim that pink items are more expensive to produce but it has been proven time and again that that’s not true. A way you can clearly see this is in disposable razors. Women razors are normally plastic, pink, dull, and overpriced while mens razors are higher quality, last longer, are sharper and less expensive.

These gaps hurt women that don’t know about these differences and continue to buy these items and spend way too much money. It especially affects women who are poorer and have trouble affording these items. One tax is on feminine-hygiene products as law makers claim that’s it’s a luxury item as many women argue that it is a necessity product and not optional. How ever we have not made much progress to remove these taxes. Many states still have them. Public official Chang said “Feminine-Hygine is not a choice and should not be taxed.” The worst part is that women can’t go without these products so they have to continue to buy these unnecessary prices. On average women pay $7 a month on these products for 40 years. It usually adds up to be $20 million statewide annually.

Women who are already poverty-stricken now also have to worry about how to get these products. In some European countries they made these products free so all women could have access to them. In California many lawmakers are trying to remove the taxes off feminine-hygiene products and instead add them to alcohol products. Only a few states in America actually have accessible products for women of all socio-economic levels. Hopefully in the future these products will be removed completely.

Over all, Gender stereotypes are harmful to everyone involved. The only question is why they still exist, luckily people are taking steps to eliminate these issues and although we still have lots of ways to go we have still made great progress since the 50’s with the civil rights act and amendments put in place to try to remove taxes and even out the wage gap. Gender stereotypes hurt people and they need to end. 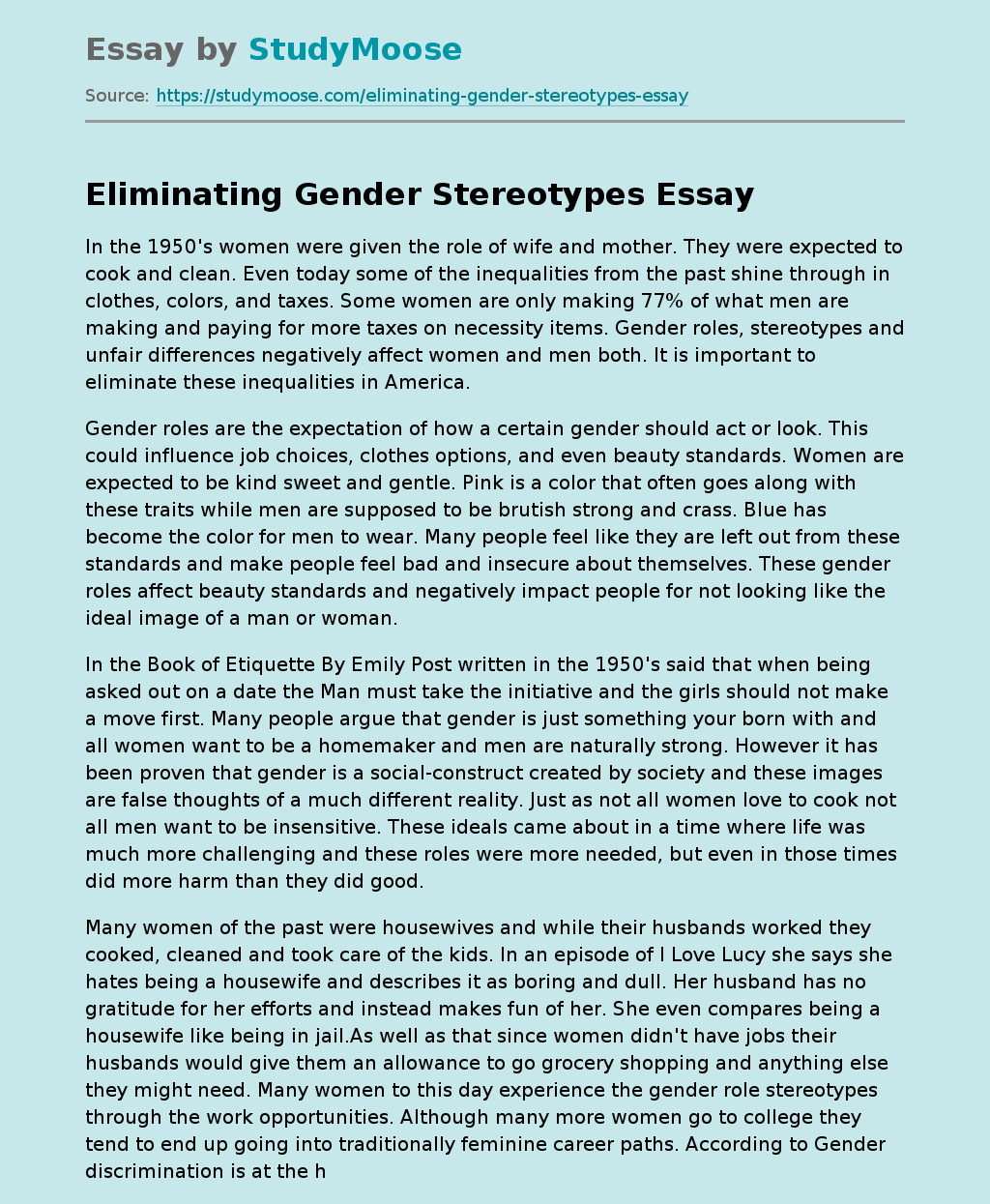