Fighting corruption has emerged as a key development issue in India in recent years. More and more policymakers, businesses, and civil society organizations, have begun to confront the issue openly. At the same time the general level of understanding about corruption has risen markedly. Until recently, it was not uncommon to hear someone discuss anti-corruption strictly in law enforcement terms. By contrast, most people working in the field today acknowledge that public education and prevention are equally important. The field has also come to appreciate how critical the role of civil society is for effective and sustained reform.

Don't use plagiarized sources. Get your custom essay on
“ Importance of youth character building in eliminating corruption from thepakistani society pdf ”
Get custom paper
NEW! smart matching with writer

A number of factors explain this growing emphasis on fighting corruption. Expansion and consolidation of democracy at the grassroots level has enabled citizens to use the vote and new-found civil liberties to confront corruption, prompting leaders and opposition figures to show a stronger anti-corruption commitment.

Internationally, since the end of the Cold War, donor governments have focused less on ideological grounds for foreign assistance and concentrated more on trade and development, both of which are undermined by corruption.

Countries with high levels of corruption, like India, have found themselves less able to attract investment and aid in a competitive global market. At the same time, business within the country has faced ever stiffer competition with the gobalization of trade and capital markets, and has become less willing to tolerate the expense and risk associated with corruption.

A preliminary analysis of the literature shows that corruption in India and elsewhere is recognized as a complex phenomenon, as the consequence of more deep seated problems of policy distortion, institutional incentives and governance. It thus cannot be addressed by simple legal acts proscribing corruption. The reason is that, particularly in India, the judiciary, legal enforcement institutions, police and such other legal bodies cannot be relied upon, as the rule of law is often fragile, and thus can be turned in their favour by corrupt interests.

Viewed in this perspective, anti-corruption strategies are not simply policies that can be planned in advance and isolation, but often a set of subtler insights that can be developed only in conjunction with citizen participation. Combating corruption is, therefore, not just a matter of making laws and creating institutions, but rather it is deeply rooted in the activities of the civil society itself.

METHODOLOGY
In recent years significant improvements have been made in the

measurement of corruption, in the construction of composite corruption indices, and in the design and implementation of surveys. Beyond applying improved empirics through a multi-pronged approach to surveys, it is now possible to construct a framework linking the analytical and empirical
research with operationally relevant utilization. We can effectively utilize empirical analysis in the design and implementation of action programs. The Economic Development

Institute at the World Bank, in collaboration with the Transparency International and local NGOs, has developed a methodological approach integrating within one empirical framework the various components identified so far for understanding and combating corruption. This overall empirical approach links worldwide database and analysis with determinants of corruption, in-depth country analysis, and country action program (Kaufmann, Pradhan, and Ryterman 1998). In this research paper the World Bank framework is used to understand and explain the role of civil society in combating corruption in India, and consider recent initiatives for an effective action plan in this regard.

Importance of youth character building in eliminating corruption from thepakistani society pdf. (2016, May 30). Retrieved from http://studymoose.com/importance-of-youth-character-building-in-eliminating-corruption-from-thepakistani-society-pdf-essay 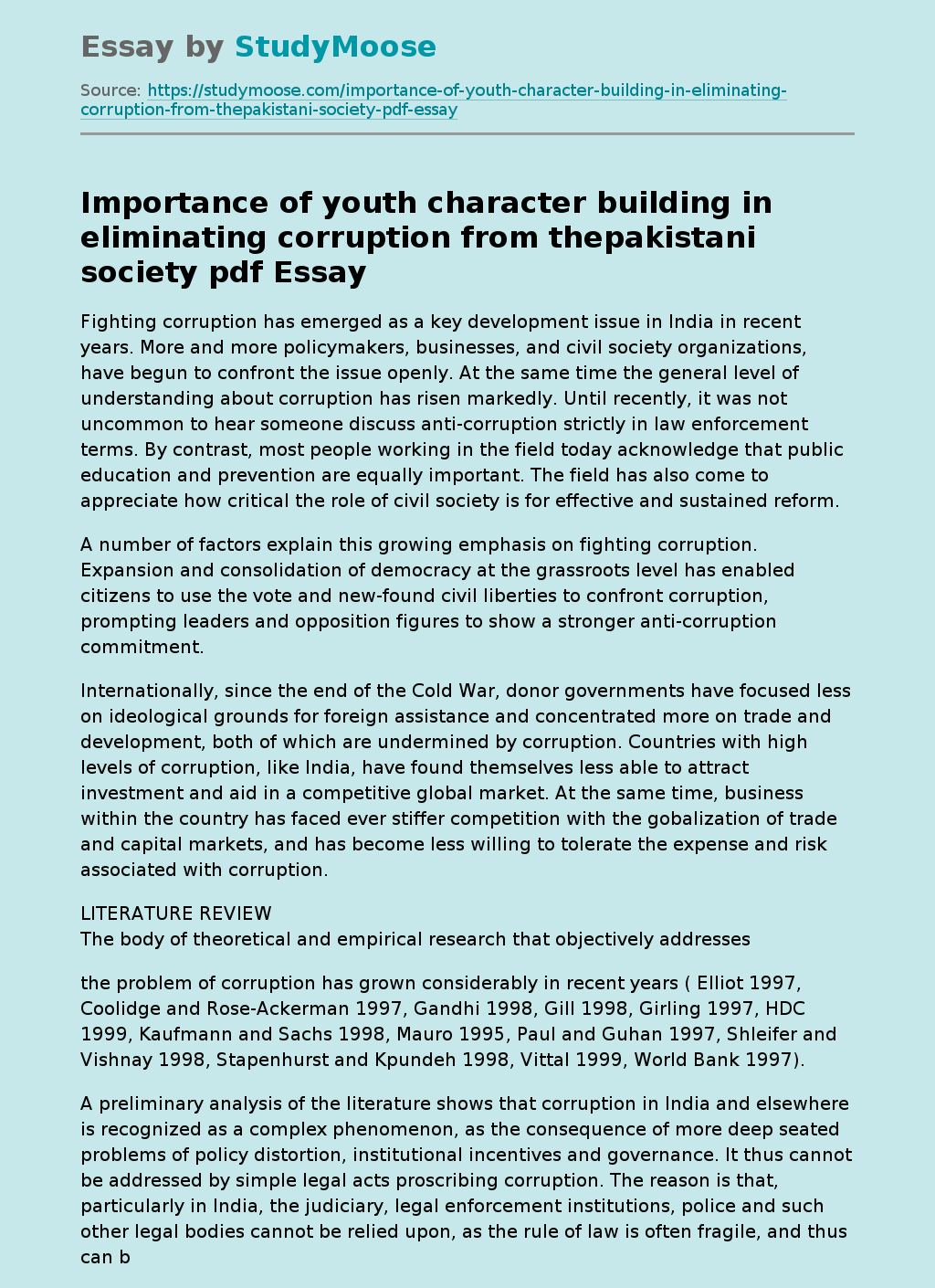