The Seriousness of Elder Abuse in Hong Kong Families

To let older adults enjoy a sense of security and a sense of belonging is a time-honoured tradition in the Chinese society. Unfortunately, elder abuse has risen as a serious social problem in Hong Kong. An organization called “The Against Elderly Abuse of Hong Kong” has received 2212 requests for assistance related to elder abuse in 2011, which has doubled the number of requests received in 2006 (“Cases of elder abuse,” 2012). Besides, several pieces of news about elder abuse in Hong Kong families have been reported, for example, a 90-year old woman was forced to leave home by her unfilial son and daughter-in-law (Li, 2012).

Don't use plagiarized sources. Get your custom essay on
“ Elder Abuse ”
Get custom paper
NEW! smart matching with writer

To ease the elder abuse problem, enhancement of the capacity of elder care services and education on the public about elder abuse have been suggested by the experts.

First and foremost, according to the National Research Council (2003), the definition of elder abuse is defined as “Intentional actions that cause harm or create a serious risk of harm (whether or not harm is intended) to a vulnerable elder by a caregiver or other person who stands in a trusting relationship to the elder or failure by a caregiver to satisfy the elder’s basic needs or to protect the elder from harm” (p.

40). There are 5 categories of elder abuse, including physical, psychological, financial, sexual, and neglect (Harris, 2006). Physical abuse, psychological abuse, and financial abuse are what this essay will emphasize on.

Apart from the stress of family caregivers due to the dependence of the elderly, family caregivers depending on the elderly financially is another common cause of the elder abuse. A study conducted by Pillemer (1985) found that “64% of the abusers in his sample were financially dependent on their victims, and 55% were dependent for housing” (p. 152). The same phenomenon can be applied to Hong Kong. As the price of flats in Hong Kong is very high, many Hong Kong citizens cannot afford it. However, some adults still want to have their own flat. Therefore, some of them will force their old parents to pay for them. In some serious cases, an adult son defrauds the money or the ownership of the flat of their old parents by inveigling them to sign the money withdrawal banking slip or the contract of the change of the ownership of their flat (Lee, 2011). Moreover, due to the underreported crime nature of the financial abuse on the elderly and family caregivers accounting for 60% to 90% of the abusers, financial exploitation on the elder people by family caregivers has become a serious social problem which is difficult to be discovered (Blackburn & Dulmus, 2007).

After realizing the causes, understanding the impact of the elder abuse is also significant. The elder people being abused would suffer from both physical and psychological injuries which lead to a higher mortality rate. According to a study in America, 40% of the non-abused elderly group were still living after a nine-year experimental period; however, only 9% of the abused elderly were still alive (Wolf, 2000). The reasons behind are due to the physical injury, such as cuts, burns, and fractures, caused by infliction of physical violence on the elderly; as well as psychological injury, such as depression, fear and anxiety, generated by verbal aggression and insulting action on the elderly (Blackburn & Dulmus, 2007; Yan & Tang, 2004). Some elder people suffering from abuse would commit suicide so as to avoid being abused continually (Blackburn & Dulmus, 2007).

After understanding the root causes and the impact of elder abuse, some solutions are suggested by the experts and related organizations to ease the problem.

Enhancement of the quantity of elderly services could help relieve the family caregiver stress by increasing the capacity of the Day Care Centers and Home Care Services for the elderly. However, the current quota of elder care services is seriously inadequate. According to the press release of the Hong Kong Council of Social Services (2011), there are 26,776 elder people on the waiting list of elder care centers and the average waiting time is 3 years, resulting in lots of elder people on the waiting list die before they can get a ticket to the center. Therefore, by increasing the quota of elderly services, family members can transfer the elderly to Day Care Centers if family members are not convenient to do so, for example, working in day time. In addition, by doing so, the family caregivers can spare time to have their social and outdoor activities to relieve their stress (Chow, 1999). Moreover, home care services, such as personal care helpers or general household helpers, can also reduce the workload and stress of the family caregivers. However, on the other hand, it may perhaps lead to elder abuse by the staff or nurses in the service centers. There are some news reports about the elder abuse by staff of elder care centers; for example, a 65-year old woman suffering from Alzheimer’s disease was forced to eat her own faeces by a management staff of a home care center for the aged (Man, 2009). Despite the few reported cases, it cannot conclude that the quality of staff in the services units for the elderly is declining. In most cases, it is safe for the elder people to live in the elder care centers. .

Besides increasing the quota of elderly services, detection of elder abuse is also important. As the elder abuse cases are underreported, it is crucial to find them out so as to avoid the elderly suffering from abuse continually. Health visitors who have been trained to identify the suspected abuse cases can be introduced to visit the elder people regularly, observe the elderly to see whether he or she has been abused, and report suspected abuse cases to the Social Welfare Department (Roe, 2002; Strasser & Fulmer, 2007).

Ultimately, educating the public about the official definitions and consequences of different kinds of elder abuse is a long term measure to ease the elder abuse problem as it can reduce the misunderstanding of elder abuse and raise the public awareness towards the problem (Chan, Chun, & Chung, 2008). According to the Political Declaration and Madrid International Plan of Action on Aging (2003) of the United Nations, one of the objectives of policy change is stated as “… encouraging health and social services professionals, and the general public, to report suspected elder abuse; including training on elder abuse for the caring professionals; and establishing information programs to educate older persons about financial abuse, including fraud” (p. 5). This policy reflects that educating the public and the elderly to detect and prevent elder abuse is an effective measure (Blackburn & Dulmus, 2007). Organizing exhibitions in shopping malls, holding seminars in community halls, and making advertisements on television are the measures that can be considered by the Hong Kong government in order to educate the public about the seriousness of elder abuse. Despite low efficiency and time consuming, in long-term, educating the public to help report the suspected cases of elder abuse can deter the abusers from hurting the elder people.

It can be seen from the above that elder abuse is a serious social problem with low public awareness. It leads to many harmful consequences to the elder people who, however, usually hide the case to protect the abuser who may be their family member (Blackburn & Dulmus, 2007). To tackle the problem, enhancing the capacity of elder care services, introducing health care visitors, and educating the public about elder abuse could be the possible solutions. Despite some weaknesses of the solutions, they can boost the public awareness after all. If more citizens in Hong Kong realize the impact of elder abuse, less elder people will be abused and the problem of elder abuse can be relieved. The elder people in Hong Kong can really enjoy a sense of security and a sense of belonging.

In R. J. Bonnie & R. B. Wallace (Eds.), Committee on National Statistics and Committee on Law and Justice, Division of Behavioral and Social Sciences and Education. Washington, DC: The National Academies Press. 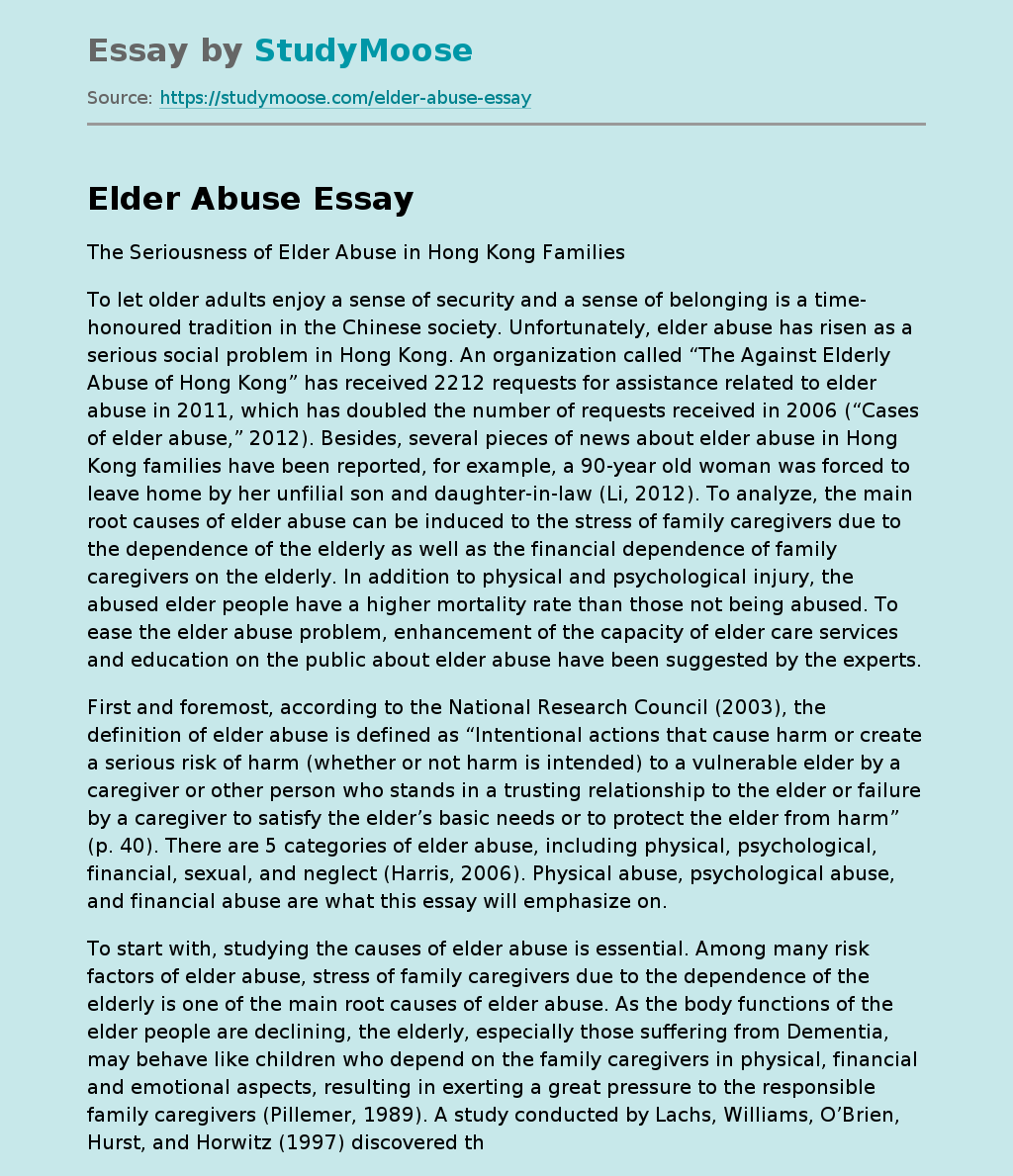