Human development is understood only in the light of a thorough knowledge and understanding of the complete makeup of man. However, the accumulation of bases and proofs for the evidences in this understanding would not be possible without utilizing scientific methods – in their distinct capacities and limitations – that helped cement psychology’s place in the realm of scientific knowledge. Only when psychology employed scientific methods did it come to be a force to reckon with among many of the pure and applied sciences (Bootzin, 1991).

Turn in your highest-quality paper
Get a qualified writer to help you with
“ Social Deprivation ”
Get high-quality paper
NEW! AI matching with writer

The solemn responsibility of being parents to a child is grave, and the consequences are immense should they fail in any of the areas of parenthood. On the contrary, when it comes to deliberately hurting a child, or causing damage to their psyche’ as a person, the term “failure” would not be adequate or appropriate to describe its effects. Whether abusing or neglecting a small person, studies reveals that the results are almost the same: the destructive effects are colossal and prevailing for almost all of the rest of the child’s life.

This paper attempts to explain the nature of social deprivation, the causes and effects as it is observed among children but more particularly in the adult years. It answers to the question what is social deprivation and what are its effects on children? To facilitate and answer the statement of the problem, several sources were used as references which include textbooks of developmental psychology and general or introduction to psychology focus. The following statements of the problem guide the direction of this study with the succeeding chapter providing the description towards these problem statements.

Answers to the problems are incorporated in the analysis and discussion of the findings and results. A. Statement of the Problem 1. What is social deprivation? 2. How is social deprivation demonstrated in a child’s/adults’ life? 3. What are possible treatment solutions and/or interventions to prevent and or minimize its effects on adults? B. Methodology The researcher utilized the convenience and accessibility of the World Wide Web and/or the internet, other books and journals available to the researcher. III. Analysis and Discussion of Findings and Results of study

Freud emphasized that the child’s first five years are most important to social and personality development. Freud pointed out that satisfying one of the child’s needs becomes a source of potential conflict between the child, who wants immediate gratification, and the parent, who places restrictions on when, where, and how the child’s needs should be satisfied. Freud’s psychosexual stages are part of his larger psychoanalytic theory in personality. Thus according to him, a child will encounter different kinds of problems in infancy and childhood, which will shape his social and personality development (Atkinson, 1993).

Social deprivation is a form of parental abuse much like parental neglect. “Deprivation as an influence on child development can occur at any level in society, but the focus of the panel was on those types of rearing imposed by poverty with its fostering of dependency, hopelessness, helplessness, and passivity” ( Spurlock, 1970). “Deprivation in the earlier stages of life, when lack of appropriate stimulation (or lack of protection from excessive stimuli) may distort or stunt the growth of brain structures, or, in psychoanalytic terms, distort the growth of the somatic and psychological” dimensions (Nagera, in Spurlock, 1970).

It is defined as a disregard of the fundamental responsibilities on the part of parent, or parents, to provide for the child’s social development. When parents fail to provide an atmosphere where a child can feel loved, wanted, and sheltered within home environment, parental neglect is taking place. If the parents are constantly physically unavailable, or physically present but inattentive to the child’s legitimate needs, they are essentially abandoning their primary duty as guardians.

Although not easily identified as physical assault, parental neglect is equally serious and as damaging to a child (Hay, Tom. 1997 in Rodgers, 1994, p. 14). As early as the prenatal stage, neglect can take place. If both parents fail to look at the importance of the physical and material needs of their children, even at this stage, there poses a real threat to the child in the womb. The tendency of the baby to be born with birth defects is very high and might cause retardation in physical or mental growth.

The high threat that is posed to a child in the belly of a self-destructive mother cannot be underestimated. If perchance the child is successfully carried to its full term, damage has already been done by consistent substance abuse. The usual objects of abuse are children – preschoolers and infants (Hay, Tom. 1997 in Hegar et al. , 1994, pp. 170-183). It might be that because children are naturally weak, they are predisposed to maltreatments, and are often overlooked by parents when arguing which at times culminate in aggression. As is always the case, children are the ultimate victims in abusive homes.

Social health factors – the fact that parents may be very young and at the adolescent stage in particular, or if the parents (or maybe one of them) are drug dependents and the children are solemn witnesses to the goings on; all are critical to the molding of the child’s mental and emotional aspects. What is more startling is that another factor, the “biological factors” emphasized the impact of trauma (not just to mention the physical one) on the changes that a child undergoes in the neurobiological level (Hanson, Rochelle F. and Eve G. Spratt. 2000).

Absorbing the detailed description of the studies made mention by the author on what they call as “pruning of specific neurologic pathways” and that which specifically influence the affect or emotional bearing of the child. No wonder some children never can overcome these effects especially when they reach adulthood when stresses compound and those ‘pathways” may no longer be able to bear up the crisis that had arrived into their lives. Effects of Social deprivation A wide range of effects of social deprivation are recognized by research as possibly affecting children and their later development.

As Nagera pointed out, some of the physical changes are involved in the nervous system, or in the neural level of development where brain structures are insufficiently stimulated and developed resulting to emotional, psychological and interpersonal deficits (Spurlock, 1970). In a study by dental health practitioners, a strong correlation is shown to exist between dental decay and social deprivation (“How water fluoridation reverses the impact of social deprivation”, 2007). This study confirms that social deprivation has important and significant impact upon the overall health of a child.

One significant result of social deprivation is the onset of schizophrenia in adulthood. The study by Harrison and the rest of the team reveals that social deprivation which usually comes as a result of low socio-economic status (SES) or social inequality essentially implies that the possibility that a patient has developed schizophrenia could be through biologic means such as exposure to infection or toxins, or with nonbiologic mechanisms such as social stressors (Harrison et al, 2001). In a different study which focuses on offenders, there is also a correlation between social deprivation and criminality.

In this study by Meek (2006), Social deprivation and rural youth crime, the findings reveal that in areas such as those that apparently lack this particular aspect of an individual’s life. The study shows that young adults are particularly vulnerable because of the high visibility and the pervading marginalization of the rural residents from service delivery, policies and research. The same study shows that cases of re-offending are therefore high considering that these concerns are perpetuated and therefore aggravate their conditions (Meek, 2006).

Conclusion As cited by Dr. Richard Gardner in the American Journal of Family Therapy (Gardner, 2002p. 6), parental abuse may take many and varied forms. Some of them are subtle and may be very difficult to identify especially when proving them in the court of law. However, parental abuse occurs when a parent treats a child in a manner that results in physical injury, emotional or psychological harm, or anything that might cause the child to be exposed to serious threats such as deprivation of necessary parental benefits which eventually results in lifelong incapacity in the life of the child (Hay, Tom. 997 in Whipple and Webster-Stratton, 1991).

Social deprivation is an obvious lack on the parents and community to provide for a legitimate need of a child. The ramifications of the neglect and seemingly inadequate attention for the social development of the child are actually dire and extensive. Adequate knowledge in total child care is a requisite for any would-be parent which apparently is not always the case. Family is supposed to be a home and a place for children to grow healthy physically, emotionally, and intellectually. Neglect should never become part of parenting styles. 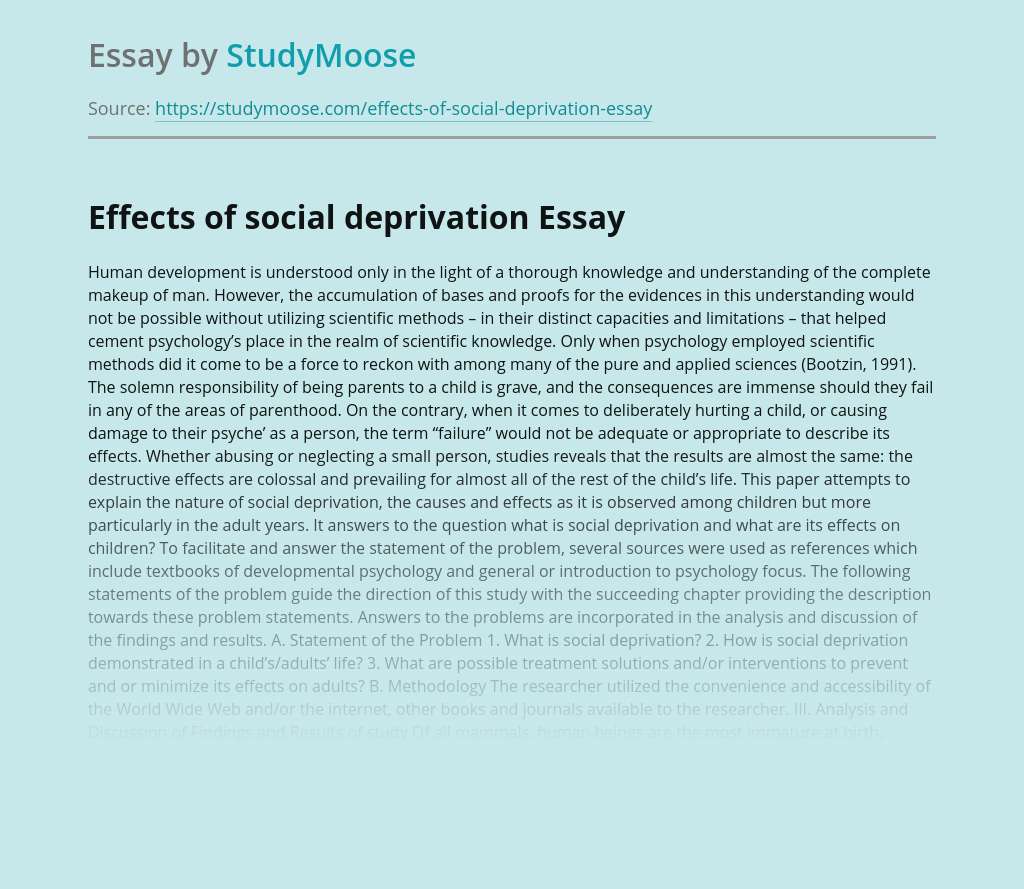 Turn in your highest-quality paper
Get a qualified writer to help you with
“ Social Deprivation ”
Get high-quality paper
Helping students since 2015
Stay Safe, Stay Original