Don't use plagiarized sources. Get your custom essay on
“ Early childhood deprivation ”
Get custom paper
NEW! smart matching with writer

For instance, studies show that infants or children who are not touched usually develop “nonorganic failure to thrive” syndrome (Brooks-Gunn, J. et al. , 2004, p. 106) that make then refuse to eat and became suicidal. Additionally, touch is necessary for emotional bond for the child that is responsible for creation of brain patten to support interaction behaviors and form basic for later empathy development, therefore, abosute deprivation is critical especially to child development and sustainability.

Relative deprivation described as lack of child’s developmental needs that are determined by subculture and culture in which the child resides. Unfortunately, developmental expectations in relation to children development usually changes overtime. For instance in United States of America it has been a norm culture that children at age of 6 years are ready and expected to enter the first grade in order to learn how to write, read and do basic mathematics.

Unfortunately, research by Biller and Solomon (1996) indicates that 20-30% of all children are not ready by this time. Moreover culture also oblige the parents give special attention to their children in terms of facilitating celebrating children status like birthday in order to promote children social conscious development, therefore in circumstances where the culture through parents denies children typical opportunity which is considered essential for a healthy child development it becomes deprivation.

Moreover, children worldwide live in varied living conditions with resources never been equitably distributed to all children depending on familial social, ethnic identity, social economic and county of origin, this inequity hampers children development physically, socially and mentally precisely most children who are deprived off relatively usually develop maternal depression, abuse and family violence. Perceived deprivation results from children’s and parents feeling that the children are deprived due to frustrated desires as opposed to unmet needs.

For instance, in a family set up there is child rivalry because it is normal parents usually favor some children than others. As a result, the child that is not favored feels unwanted no matter how hard parents can convince them. For instance, studies show that children who are taken good care of after incidences of neglect, despite sufficient supply of food and emotional support, they tend to exhibit signs of mistrust due to perceived deprivation (Biller and Solomon, 1996). The causes of deprivation

The causes of deprivation vary across populations and societies. However, the most causes are familiar such as low skills and education, membership in minority groups, undevelopment and unemployment, social isolate from society’s mainstream and persistent and interrogational transmission of poverty to tolerate this factor (Brooks-Gunn, J. et al. , 2004), studies reveal that children in neigh hood without deprivation signs exhibited good growth and development outcomes as opposed to those with signs of deprivation.

However, there are a number of additional aspects that greatly contribute to childhood deprivation, child neglect in the welfare system is a common form of child neglect in us where parents are givers fail to give the child essential resources as food, medical care, shelter and clothing which endanger child wellbeing. Development impacts of Deprivation Response of children to deprivation varies from one individual to another in the sense that human beings are shaped by the interaction of their genetic predisposition with stimulation, nurture, threats and other ennental forces.

It should be noted that infancy experiences of children have a profound and long term effect on mental, physical, social and emotional characteristics, therefore, when deprivation is chronically and insidious pervasive the results are diastoles irreparable intellectual deficits, chromic health problem, mental illness, physical disabilities (Biller and Solomon, 1996), emotional disturbances and behavioral problem. Conclusion The paper has discussed early childhood deprivation and its major dimensions and its related effects.

Fortunately, the effects of early childhood deprivation are treatable (Brooks-Gunn, J. et al. , 2004) by placing deprived child on a long-term and well structured relationship where the child learn or relearn that positive social interaction to offset the negative impact. It is encouraging also that across US there are various programs and interventions that are aimed at ensuring those children and/or individual degraded by deprivation are returned to normalcy. 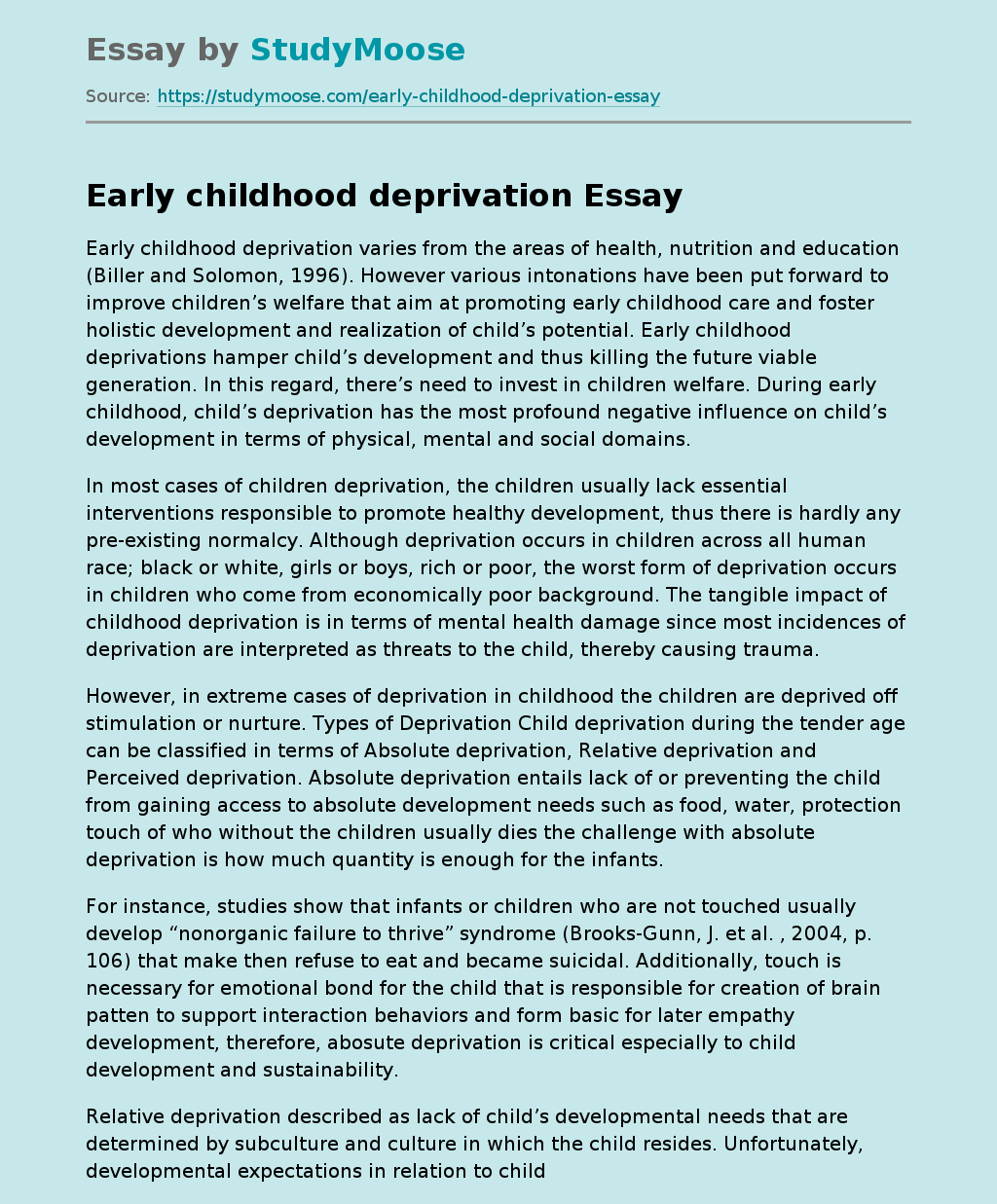