Material deprivation is when people have insufficient physical resources to sustain life, and is common among lower-class households. It affects educational achievement in many ways, including a non-nutritious diet and inadequate housing. Howard (2001) claimed that poor nutrition leads to low achievement at school because poorer homes have a lower intake of vitamins, minerals and energy which reduces children’s health and lowers their energy levels, and will also weaken their immune system. Malnourished children will have more time off school due to illness, and their academic success will suffer as a result.

Don't use plagiarized sources. Get your custom essay on
“ Outline some of the ways in which material deprivation may affect educational achievement ”
Get custom paper
NEW! smart matching with writer

Attendance is affected by playground bullying too, and this is sometimes caused by children not owning fashionable or popular items (for example, expensive trainers). If being stigmatised, children may fake illness in order to skip school, and again their grades will suffer.

Some children may not have time to revise at home if they have to help their parents with chores and childcare while they’re at work- many parents can’t afford to give up work or cut down their hours if their income is low, so tasks often fall on the older children.

Their revision and homework completion can also be affected by overcrowding in the household, as a study space is needed for each child in order to achieve academic success. Overcrowding can lead to illnesses spreading around the household easier as well, which again affects attendance. Many parents cannot afford to move location to be in a school’s catchment area, as a result a lot of children aren’t able to go to the better schools and have to make do with those in working-class areas.

The chances of someone from a working-class family continuing education to degree level is made unlikely by the fear of debt installed in them from their poverty-stuck upbringings.

University fees have become so high that many people can’t afford to go and, even with loans, commuting and accommodation can make university overly expensive. People are therefore put off the idea of continuing education and most lack ambition for their futures. An important consequence of material deprivation is that children leave school at 16 to begin working. This allows them to become an economic asset through providing money to their family, instead of needing school resources for another two years. Hasley wanted to find out why so many children from working-class families leave school at 16, and looked at material and cultural deprivation. They found that the main cause was actually material deprivation, which says that it’s not a lack of culture and intelligence that prevents children’s academic achievement, but economic problems instead.

These two forms of deprivation are linked, as both are at least partially caused by lack of income. Cultural deprivation includes a lack of educational activities within the family. For example trips to the theater may be common in middle-class families, whereas the working-class opt for cheaper option of entertainment- such as television. This inability to afford socially acceptable means of entertainment supposedly affects educational achievement as the children don’t learn complex language.

Outline some of the ways in which material deprivation may affect educational achievement. (2016, Apr 03). Retrieved from https://studymoose.com/outline-some-of-the-ways-in-which-material-deprivation-may-affect-educational-achievement-essay 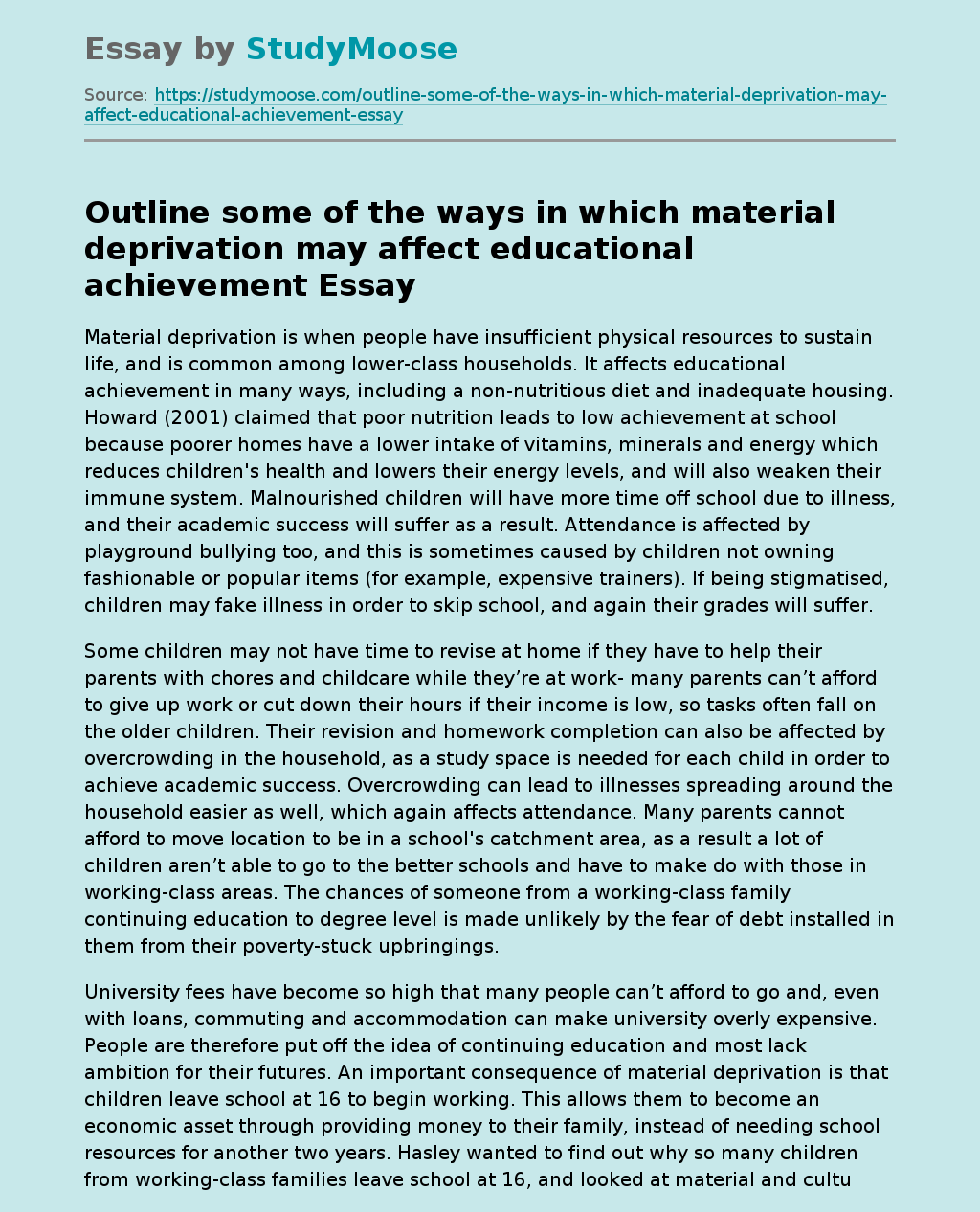