Socioeconomic status inequality can be defined as discrimination based off of an individual’s social status (income, family, education, etc.). In general, those coming from low-socioeconomic backgrounds tend have inadequate access to legal resources. This becomes a problem since it affects the quality of the trial and gives an advantage to those who are of a higher socioeconomic status (Aceves, 1992, p. 68, 89, & 93). Aveces (1992) argues that there is problem in the way prosecutors discriminate against defendants in lower socioeconomic statuses (p. 93). Those less educated have the potential to receive harsher, stiffer sentences as well as receive more convictions (Everett & Wojtkiewicz, 2002, p.

Don't use plagiarized sources. Get your custom essay on
“ Effect of Socioeconomic Status Inequality  ”
Get custom paper
NEW! smart matching with writer

In plea bargaining, defendants who are coerced to plead guilty are subject to suffer from a multitude of repercussions. These substantial impacts should not be overlooked or ignored (Scott and Stuntz, 2018, p. 1967). Anything on a criminal record carries major consequences as well as affects future opportunities to secure jobs, housing, and loans (Berdejó, 2018, p. 1217-1218).

If incarceration is one of the stipulations of a certain plea, major irreversible effects may result in long-lasting, permanent damage to the person (Haney, 2001, p. 4 & 8). Thus includes psychological effects such as anxiety, depression, impulse control disorder (ICD), PTSD, hallucinations, or other profound tramas (p. 3, 9, 10, 11, 13, & 14). As for physical conditions, because inmates are required to adapt to prison life, once released some become dysfunctional, violent, self-destructive, paranoid, hypervigilant, withdrawn, emotionless, overwhelmed, or have feelings of helplessness and hopelessness (p. 4, 7, 8, 12, & 14). Of course, this varies from person to person, depending on the circumstances (p.

4). These attitudes can cause serious problems and difficulties not only in family life but also in the workforce since it implicates the relationship between both groups (p. 6, 8, & 15).

Not only does the individual suffer from taking on a biased plea bargain including incarceration, but society faces consequences as well. There are three main focuses that will be addressed: wasted resources, increased homelessness, and degradation of the criminal justice system.

In regards to the first point, by prosecutors continuously acting with prejudice, there is an increased amount of misused money, time, and space. In a study conducted in 2001, states spent nearly $30 billion for prisons alone (Stephan, 2004, p. 1). This number is still increasing rapidly as each year passes. Overcrowding is also a prominent issue leading to numerous problems (Williams, 2015, p. 484). In 2008, the jail population surpassed past records, counting approximately 800,000 prisoners in total (p. 486). This number is growing at an alarming rate as well.

With reference to the second point, homelessness is a national concern affecting thousands across the United States. Those who are discharged from prison face this problem quite frequently (Roman & Travis, 2004, p. iv). In a study reported in 1997, 10 percent of the homeless population were parolees. In urban areas, an estimated of 30–50 percent of all parolees were homeless too (p. iv). To sum up, even major cities including the county’s capital, Washington D.C., identified prison release as a leading influence on homelessness (p. v).

Finally acknowledging the third point, many citizens have come to doubt the law’s integrity and effectiveness (Sherman, 2001, p. 13). Tolbert and Mossberger (2006) expressed, “There is widespread concern that the public has lost faith in the…government” (p. 354).

Tying all factors together, this message conveys that as inequalities increase, so will wasted resources, homelessness, and the rejection of the criminal justice system. As inequalities decrease, resource will be used in an effective manner, homelessness will decrease, and public relation will improve.

In closing, bias in plea bargaining of any sort, whether that be of race, gender, age, or low-socioeconomic status, negatively affects all citizens either directly and indirectly. It is imperative that the removal of such inequalities progresses to be a top priority of prosecutors and judges so as to reduce discrimination, use resources efficiently, decrease homelessness, and keep the integrity of the United States. 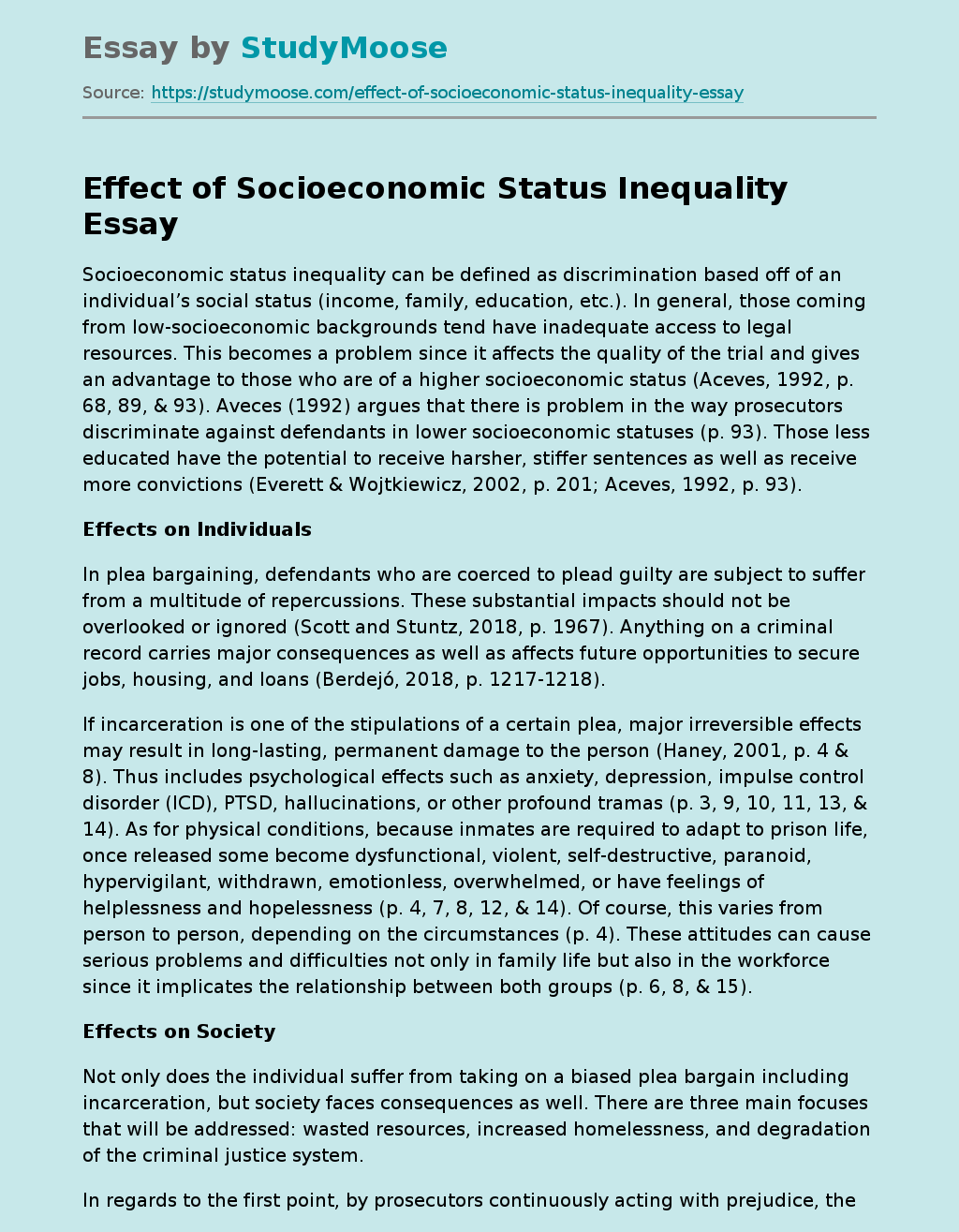