There has always been some times in our lives when we retrace our naive early days that we learn from try-and-error and we can’t stop thinking “how I wish there were mentors in my life who draw me the blueprint of future, point out the right way for me to pursuit and prevent me from making so much immature mistakes”. Therefore, some of us come up with the idea of making it educational institution’s responsibility to dissuade students from pursuing fields of study in which they are unlikely to succeed.

Turn in your highest-quality paper
Get a qualified writer to help you with
“ Educational institutions have a responsibility to dissuade students from pursuing fields of study in which they are unlikely to succeed ”
Get high-quality paper
NEW! AI matching with writer

I agree that some instructions and advises should be given to young generations when choosing their future career. However, in my view the statement goes too far, by suggesting that it is the educational institutions’ duty to help the students make the choice. If followed the statement, the social, psychological and human-rights implications the suggestion carries would turn out to be more harmful than beneficial—not just to the students but to the entire society.

At first blush, the statement seems compelling. One great purpose of education is instilling in students with experiences of elder generations after all. Young people, passionate, brave and innovative as they are, their naivety and lack of experience often make them mistakenly put too much energy on areas they’re unlikely to achieve success in the first place, waste the golden years and end up all the great talents and efforts in vain. Usually, it is hard for people to estimate their talents and abilities objectively at their juvenile ages when their minds are full of confidence and hearts desperate for success.

Every year, thousands of hundreds of young people flock to Hollywood hoping to get auditions to show their talent and dream about overnight fame; likewise, the number of students joining the fierce competition of entering acting school continues to rise in recent years.

However, most commonly, these passionate young people who are eager to pursuit a career of acting end up doing odd jobs in restaurants for a living. Supposing when receiving education, these young people have been carefully assessed and informed not having the qualities of becoming an actor; they would not be so keen at investing precious time and efforts on pursuing a career they’re not suitable with and may turn to other area which they show more capabilities on. Another common circumstance is that some fields of study themselves are not easy to make a difference or not worth working on; such as alchemy, inventing perpetual-motion machine and studying the origin of the universe in developing countries. At this time, young people need helps from instructors and schools to understand the situation clearly and avoid those areas which have reached to a dead end, so as not to waste their valuable youth times.

Beyond this concession, however, I disagree with the statement mainly because it actually implies that educational institutions should make choices relating students’ future career for them instead of letting them make their own choices. First, this policy would require that a society of parents make choices that they surely will never agree upon to begin with—for example, how and on what basis each student’s talents and abilities should be assessed, and which field of study is promising and most worth the society’s time and efforts.

While society’s parents would never reach a reasonable consensus on these issues, it would be totally irresponsible to leave these choices to a handful of institutions and bureaucrats. After all, they are unlikely to have the best interests of the students in mind, and their choices would be tainted by their own quirky, biased and profit-oriented notions of how the student can be successful. Chances are these institutions will make the majority of its students into fields of study which are most popular currently in order to enhance the institutions’ reputation. If so, the policy will dwindle into tool for educational institutions to sacrifice its students’ interests in order to enlarge the institutions’ profits.

Even assuming both the institutions and bureaucrats puts students’ interests at first instead of being driven by its own profit when helping students choose their future career, I still disagree with the statement. One important reason is that whether people’s talent or society’s situation are both complicated things hard to be estimated; which means even the instructors are equipped with more experience and information, it is still unjustified that they will outsmart the students when concerning the students’ future. Great minds are always ahead of the times; genius artists and scientists usually cannot be recognized at a very young age—especially by their teachers. Einstein was considered dull and unpromising by his primary school teacher; Van Gogh’s painting was considered to be of no value in most of his lifetimes.

Educational institutions evaluating students’ talent from a mundane piece of view may be counterproductive and at last leave students talent killed in the cradle. Similarly, people’s estimation on field of study worth putting efforts on can be of no accuracy as well. It is very much common that many researchers and projects which shows little value and hope at times turn out to be crucial foundations of great discovery and inventions in the future. Letting educational institutions choosing fields of study which its students are more easily to achieve success may cause the whole society turn to areas which can be achievement in a very short term and nobody will engage on studies such as art, history and theoretical science whose fruits are hard to gain immediately. Obviously this will eventually break the balance and threat the whole society.

Another reason I oppose to the statement is that the definition of success itself is vague and controversial. While some people reckon successful career as those who can bring them wealth and reputation, some may prefer occupation which can make them feel accomplished and fulfilled. Also a great amount of people like me expect jobs which are not so busy that can leave us free time to attend our families. Since people’s opinion on “successful career” is such complex and diversity, letting educational institutions make choice for young people’s future career based on their understanding of success does not make any sense.

Moreover, people’s talents and abilities usually stretch out into various fields. Einstein the famous scientist is also an outstanding violinist; Da Vinci shows talents both on arts and autonomy. But at last people tend to choose the field which they have the most passion on as their lifelong career because usually people behave better on areas they’re most interested in. Supposing regardless of people’s will, we put Albert Einstein into a symphony for a living and let Da Vinci go to medical school in which he will not be distracted by all about painting; those people may as well be well-known or even richer, but will the world and the genius themselves be more pleasant?

In the final analysis, when we are helping young people plan their future career with experience and information brought by elder generations we’re all better off, only if we stick to the principle that the right to make choices about future career is held in the young people themselves’ hands. Through education we provide students with a value system and a set of logic to serve as compass, skills as well as knowledge to serve as ballast. But the ultimate purpose is to enable young people themselves holding the rudder of their life ship and sailing the way they wish.

Educational institutions have a responsibility to dissuade students from pursuing fields of study in which they are unlikely to succeed. (2016, Apr 22). Retrieved from https://studymoose.com/educational-institutions-have-a-responsibility-to-dissuade-students-from-pursuing-fields-of-study-in-which-they-are-unlikely-to-succeed-essay 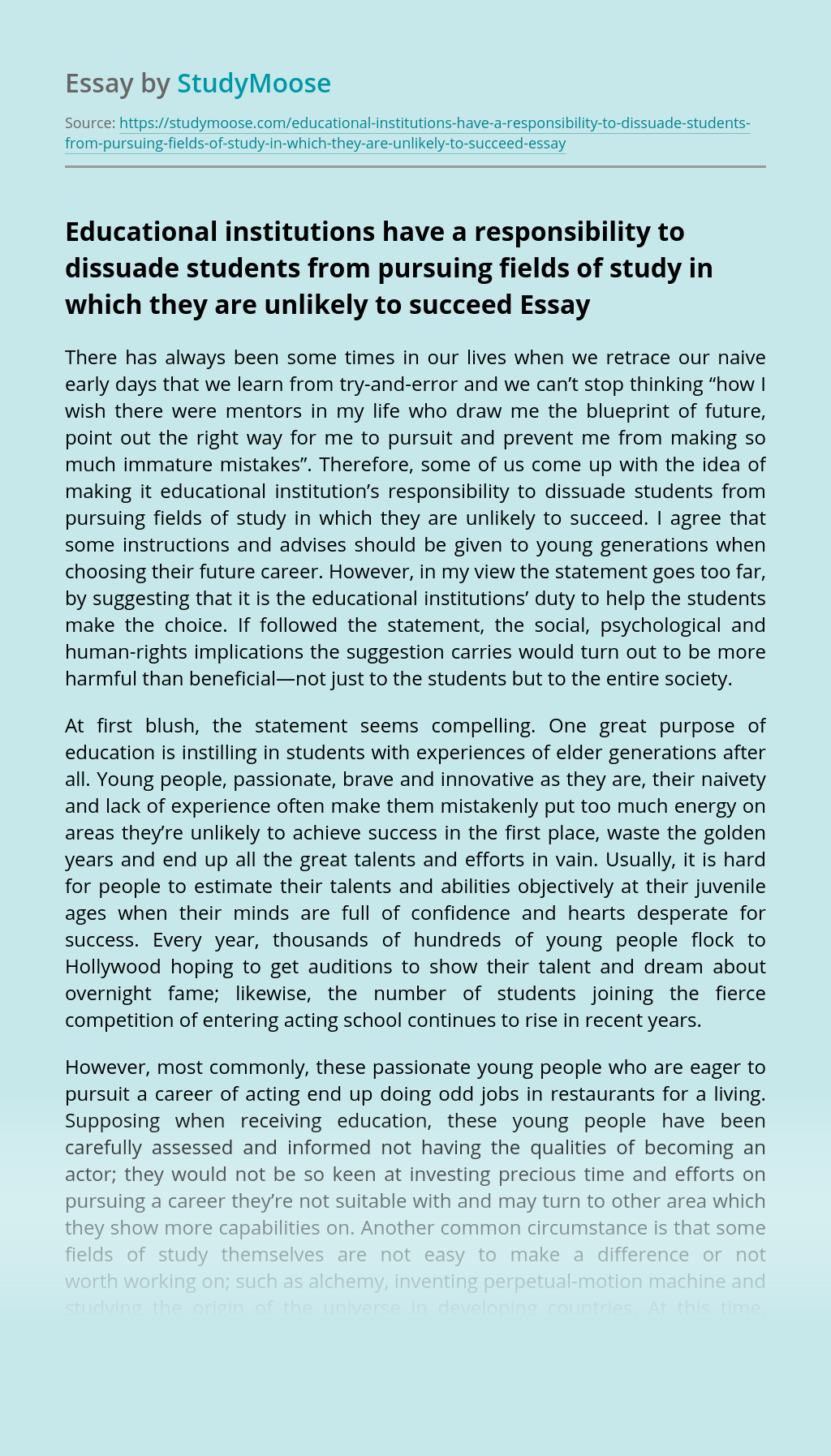 Turn in your highest-quality paper
Get a qualified writer to help you with
“ Educational institutions have a responsibility to dissuade students from pursuing fields of study in which they are unlikely to succeed ”
Get high-quality paper
Helping students since 2015
Stay Safe, Stay Original