Dunkirk Was a Miracle of Deliverance

From the 27th of May to the 4th of June, there were the nine days of evacuation of British, French, Belgian and Dutch soldiers alike. They were trapped in the small town of Dunkirk due to the port that was there. After waiting for days, the majority were eventually rescued by a combination of naval vessels and civilian boats as well as fishing boats and ferries. It is regarded as a great victory for the British as it saved many lives although a military victory for the Germans.

Don't use plagiarized sources. Get your custom essay on
“ Dunkirk Was a Miracle of Deliverance ”
Get custom paper
NEW! smart matching with writer

I agree with the quotation above that “Dunkirk was a miracle of deliverance” because of the overwhelming evidence of the pros of the operation (codenamed Operation Dynamo). The first pro of the evacuation was that 338,226 soldiers were rescued in the operation itself. Much of the British expeditionary force (BEF) was also rescued as well as 139,997 French soldiers. The German causalities were also very high with 27,074 killed and 111,034 wounded soldiers.

Although there were many material losses, the morale of the British was raised after the evacuation of Dunkirk, as they felt that they were helping in the war effort and that even though many had died, many lived to “fight another day”.

Another pro is that after Dunkirk the Americans were more motivated to enter the war and help the allies. On the other hand I disagree with this quotation because even with the rescuing of 338,226 men, another 68,000 British soldiers were killed and 290,000 French soldiers.

Nearly all of Britain’s tanks, planes, naval vessels, small arms and motor vehicles were either damaged or left behind on the beaches of France.

Another point for the cons is that many civilians were injured and killed whilst trying to rescue the soldiers stranded on the beaches. All in all Dunkirk was one of the greatest military victories for the Germans due to the massive loss of British soldiers and military resources.

To conclude, although this was a great military victory for the Germans, it was also a great help in raising the hope of the British population. In short I agree with the quotation above because of the points stated above as well as the fact that if Dunkirk had failed in the slightest for the British then Churchill would have probably signed a peace treaty with Hitler, allowing the Germans to win the war. In the long-term, Dunkirk was a great victory for the British although it was a very big defeat in the short-term as much military strength was lost.

Dunkirk Was a Miracle of Deliverance. (2016, Sep 09). Retrieved from http://studymoose.com/dunkirk-was-a-miracle-of-deliverance-essay 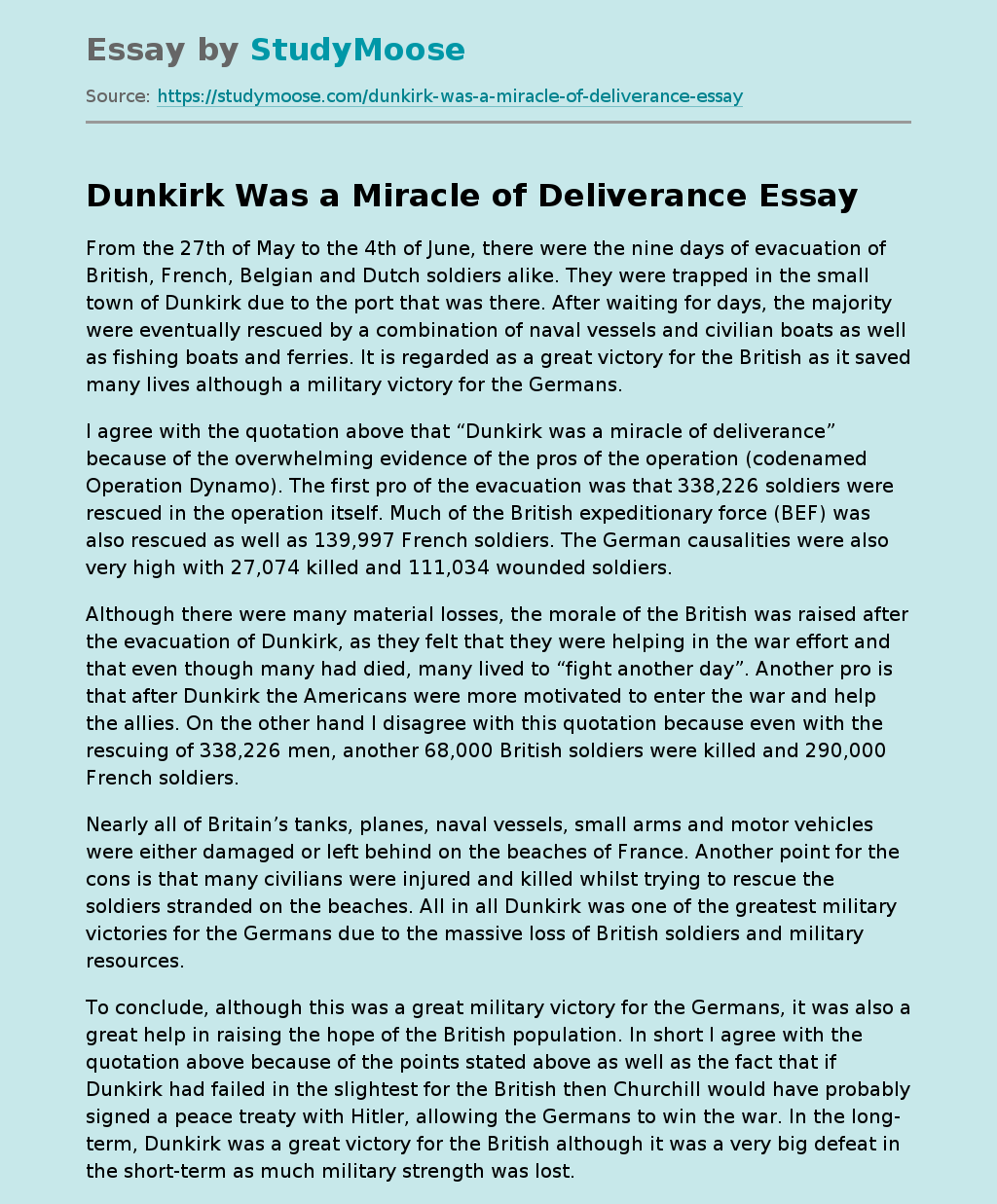