No Definition of a Miracle is Adequate

Many philosophers have attempted to define what exactly constitutes a miracle in a number of ways outlining definitions which contain the criteria for what phenomena can be counted as miraculous. Whether a definition is adequate seems highly subjective but will likely be one that is acceptable by non-Christians as well as Christians who in all probability will want a definition that accepts many of the miracle in the Bible to indeed be miraculous.

Mackie’s definition of miracles describing them as events that occur when the world is not left alone and is intruded by something that is not part of the natural order necessitates that miracles are caused by a supernatural entity which may be considered to be God.

Don't use plagiarized sources. Get your custom essay on
“ No Definition of a Miracle is Adequate ”
Get custom paper
NEW! smart matching with writer

This appears to suggest that his definition would indeed be adequate for some Christians given that it sets apart miracles from coincidences turning them into occurrences which could provide evidence for their faith. Moreover it allows a more specific idea of what constitutes a miracles disallowing events with an entirely naturalistic explanation maintaining them as unique events.

This means that though an event such as the Moon Landing would have been defined as inadequate centuries ago, today it would not. This undermines the adequacy of the definition given that what it encompasses will change with time. A further issue with the adequacy of Mackie’s definition is that it could be argued to not be sufficiently specific given that it makes no attempt to define what exactly constitutes something distinct from the natural order, and it may in fact not be God.

This would undermine its adequacy for Christians who believe that God is responsible for causing miracles and may not accept they are caused by other beings. Swinburne’s definition of a miracle appears to resolve this issue defining miracles as a violation of a law of nature by a god (a very powerful rational being who is not a material object). That said, the requirement for God to intervene in the world poses a number of challenges to Swinburne’s’ definition especially given that God’s need to intervene in his creation contradicts the idea that he is an all powerful being if the world requires changes.

Additionally philosophers like Wiles would argue that if God has the ability to intervene in the world in order to perform miracles in certain instances then his failure to prevent evil and suffering in the world undermines his characteristic of omni-benevolence. For this reason a definition that requires God’s intervention to cause miracles may be inadequate given the contradictions that would occur if such an event happened.

On the other hand, many Christians do accept that God intervenes in the world and if so this definition of miracles may indeed be adequate also determining whether God is responsible for an event may be impossible as it may just be due to limited understanding of events. Additionally, Swinburne’s definition is undermined by Hick’s challenge arguably even more so than Mackie’s given his explicit use of the term ‘natural laws’ and also would likely be subject to change as understanding changes.

Holland’s definition of miracles appears to avoid the contractions associated with Swinburne and Mackie’s explanations not requiring the physical intervention of God suggesting from the outset that it may be more adequate. This is because Holland only requires miracles to be an extraordinary coincidence of a beneficial nature interpreted religiously. The emphasis on interpretation also removes the difficulties associated with determining the cause of the miracle while still encompassing Biblical miracles.

However it would likely be criticised for being too subjective given that different people would differ on whether the same event is miraculous. Additionally the Catholic church which usually requires a person to have performed at least two miracles in order to be Canonized as a saint would likely not accept miracles as defined by Holland as they only accept events without naturalistic explanation suggesting the definition is inadequate for how the term miracle is used by some Christian denominations.

In conclusion, it seems probable that no definition of miracles is adequate given that although Swinburne and Mackie’s definition of miracles may encompass many of the instances of how miracles are used, they are undermined by the difficulty in determining natural laws and also whether God physically intervened. Likewise while Holland goes some way to avoiding these contradictions in his definition it remains highly subjective and also doesn’t reflect how miracles are used in Christianity.

Additionally it will likely also lead to significant differences between what people consider miracles. Moreover, the existence of so many contrasting definitions of miracles suggests that there isn’t a single definition that is adequate given that there is no consensus on what makes an event miraculous so any definition will be subject to significant disagreement. For this reason the statement that no definition of miracle is adequate can be considered to be true.

No Definition of a Miracle is Adequate. (2017, Aug 24). Retrieved from https://studymoose.com/no-definition-of-a-miracle-is-adequate-essay 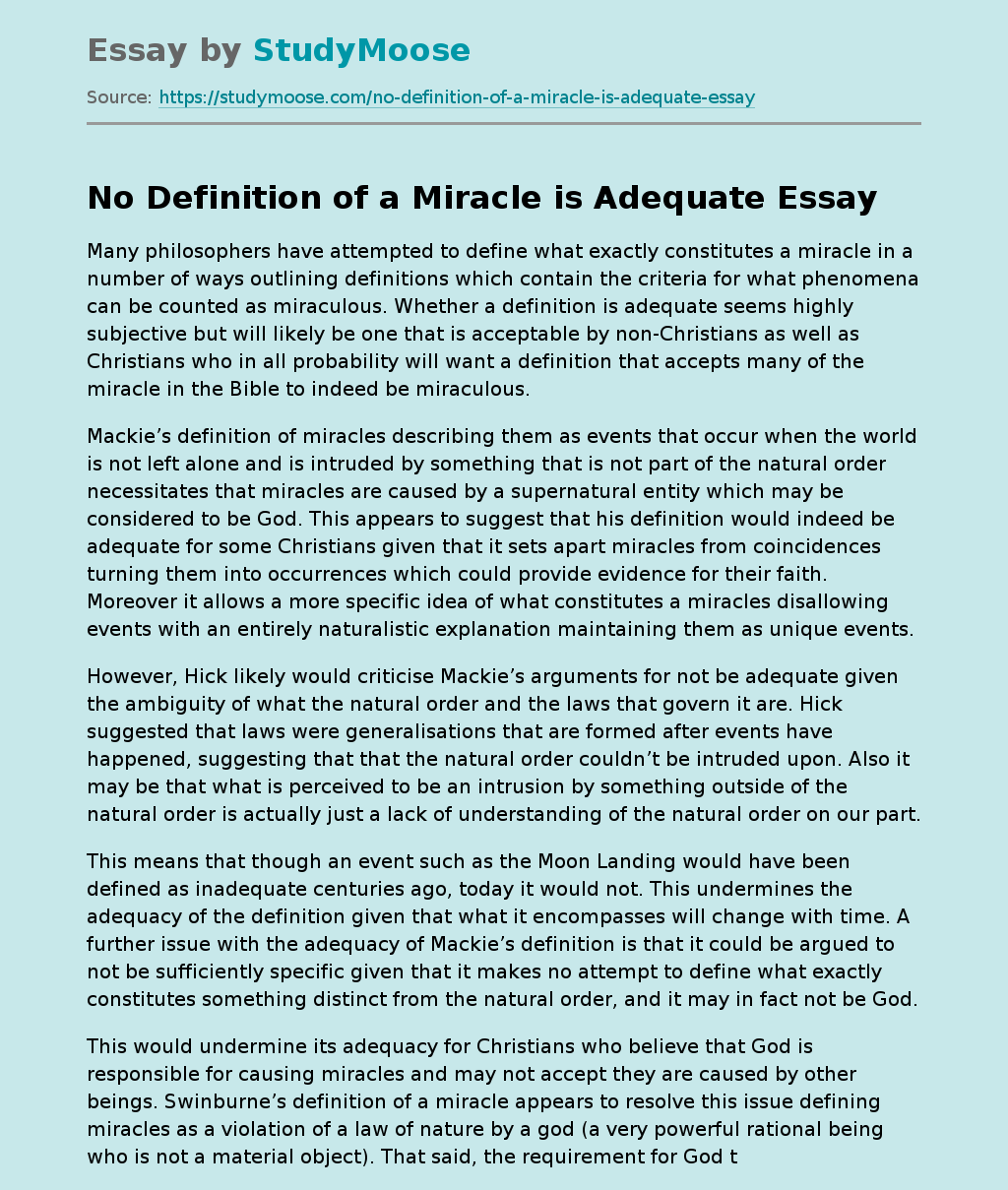