According to the World Health Organisation, health promotion can be defined as “the process of enabling people to increase control over their health and its determinants and thereby improve their health” (WHO, 2005). This essay will focus on the socioeconomic influences on health, the models of health promotion and the factors influencing health promotion. It will also highlight how a health campaign can be used to support health promotion strategies.

Health is a state of wholistic well-being encompassing physical, mental and social aspects of life and not just the absence of disease or infirmity (WHO, 2014).

Don't use plagiarized sources. Get your custom essay on
“ Health Promotion Definition ”
Get custom paper
NEW! smart matching with writer

Many factors have impact on the health of individuals and peoples in general. These include socioeconomic factors, physical factors as well individual or personal characteristics and behaviour patterns. Such socioeconomic factors include employment, income, education, lifestyle and citizenship status. This essay will focus on the effects of socio-economic factors on teenage pregnancy in Lambeth borough of London. Lambeth is one of the South Boroughs of London and constitutes part of inner London.

It is 3 miles wide and 7 miles long. According to ONS figures the borough has the highest rate of teenage pregnancy in the United Kingdom.

Although it has witnessed a reduction in teenage pregnancy by more than 12.8% since 1998 the rate still remains high. 63% of pregnancy in Lambeth and its surrounding boroughs end in termination. As of 2011, Lambeth had a population of 7000 girls aged 15 – 19 years which is 5% of the family population. In the borough 34.8% of young women aged under 18 years conceived per 1000 population in 2011. Factors associated with higher chance of teenage pregnancy include low educational attainment, poverty, use of alcohol and drugs.

Lambeth is ranked 27 of 149 most deprived local authorities thus implying a strong relationship between teenage pregnancy deprivation. Teenage parenting can be harmful to the mothers’ health apart from limiting the educational attainment and employment prospects.

Moreover, babies born to under age mothers are likely to end up as teenage parents as well. According to ONS most teenage mothers by age 30 have 22% more chance likelihood of living in poverty than those giving birth at the age of 24 or over and have less chances of being employed or living with their partners. Children born by teenage mothers are 63% more likely to have behavioural issues compared to babies born to mothers in their twenties. In order to reduce the incidence of teenage pregnancy in the borough, a number of measures can be taken.

These include school based or community based sex education linked to contraceptive services, programmes emphasising personal development and programmes promoting academic and social skills among young people. Also to ensure positive outcomes for underage mothers and their babies, good ante-natal care, home visit and support as well as child care support and career development are recommended.

Health inequalities are differences in health outcomes between communities. They are usually linked to socio-economic factors at individual and population levels. Government sources responsible for reporting these inequalities are the Health Survey England (HSE), Health and Lifestyle Survey (HALS) as well as Reports and Enquiries. The HSE and HALS was a principal tool created by government to plan health services and formulate policies for all citizens (HSCIC, 2014). It also helps the government to know the level of health inequalities in each borough. The survey is carried out annually by means of interviews and questionnaires.

The major challenges being faced by these government sources are manpower shortage to cover the whole country and inadequate funding. Another major problem is apathy on the part of respondents. In order to overcome these challenges, government needs to attract more personnel with good incentives both in cash and kind. More fund also has to be allocated for this important service possibly by imposing higher taxes on alcohol and tobacco products. It is suggested that more awareness should be created nationwide to encourage greater enthusiasm from respondents. Include statistics of teenage pregnancy

There are various types of barrier which could prevent individuals and communities from accessing healthcare. These maybe classified as physical barriers, psychological barriers, geographical barriers, financial barriers, resource barriers as well as cultural and language barriers. They include illiteracy, lack of communication skills, disability, and logistics problems. With respect to teenage pregnancy in Lambeth, education can be a barrier as some schools do not promote sex education as it can be a sensitive subject. Young people do not always take these sessions seriously, not paying attention and usually obtaining inaccurate information from their peers.

Parents are also reluctant to talk about sex with their wards as this may be perceived as giving them the green light to have sex. Another barrier is the psychological feeling of shame and fear due to the stigma associated with teenage pregnancy. Many teenagers do not visit the doctor and therefore fail to receive the medical attention that they need. They also do not inform their parents and do not receive medical treatment until late in the pregnancy which can create problems for them during pregnancy and childbirth. The last barrier is the cultural or language barrier.

Some teenagers who come from families where English is not their first language may find it difficult to access healthcare because they are not able to communicate with health professionals. Some teenagers may also stop attending hospital appointments due to healthcare workers not being aware of their culture. The following recommendations will help to reduce teenage pregnancy and produce positive outcomes for teenage mothers. (i) Education on safe sex and provision of sexual health care services. (ii) Training of professional, carers and parents to help pregnant teenagers. (iii) Identifying and encouraging underage mothers to pursue their life goals (iv) Improving and building teenagers’ self-esteem.

Health education is defined as any combination of learning experiences designed to help individuals and communities improve their health by increasing their knowledge or influencing their attitudes while health promotion seeks to give people control over their health by means of a robust public health policy which addresses socio-economic factors like income, housing, education, employment, food security and quality working conditions (WHO, 2014).According to Burton and Macdonald (2002) governments and public health officials tend to reduce health promotion to health education which attempt to change people’s health behaviour by means of public health campaigns such as ‘Promoting Better Health’ (DOH, 1987), Health of the Nation (1992) and ‘Prevention and Health Everybody’s Business’ (DOH 1976).

In the UK, government strategies for health promotion consists of vaccination programmes which help to strengthen the immune system against diseases like polio, measles, chicken pox, etc. it also includes anti – smoking campaigns, sun protection, campaigns for healthy eating, safety at home and every child matters. These strategies can be linked with health promotion models such as Becker (1974), Tannahill, Downie et al Model (1996) and Beattie (1991). According to the Tannahill et al model, health promotion is an umbrella concept comprising of health education, prevention and health protection. This correlates with the government immunisation, healthy eating and anti – smoking campaigns.

Government aims to reduce smoking rates by banning TV and Press advertising, raising tobacco taxes and banning smoking in nearly all work places and public spaces (DOH, 2014). The government smoke – free campaign seeks to encourage people to change their behaviour by making people aware of the negative effects of smoking on health.

Health professionals have important roles to play in meeting government targets for health promotion. Health promotion involves enabling people to have more control over and to improve their health (Ottawa Charter, 1986).This can take the form of health education which involves facilitating learning and behavioural change in health workers and service users. It can also be by offering more effective and accessible services to the community (service improvement) or by activities which bring about changes in government and organisational policies (advocacy). A health visitor is a qualified nurse or midwife with additional training in child health and promotion. They offer parental support and advice on how to promote the well-being of children. They offer advice on feeding, weaning and dental health. They also arrange access to support groups such as sure start and housing agencies. Another health professional is the school nurse which helps to promote health and safety within the school environment.

They also collaborate with in house services to help children attain full capacity in self-management. As a smoking cessation officer I have the role to offer advice to clients to stop smoking, assessing their willingness and encouraging people to stop smoking in their houses and family cars, emphasising the effects on children and encouraging smokers to try and quit in the most effective way. The above strategies are in line with the Becker (1974) model of health promotion which postulate that people’s behaviour is a function of their perceived threat to their health of not taking a particular action and how they believe that action will address the threat.

As a smoking cessation officer in a GP Practice, I would make use of the Becker’s Health Belief Model to help reduce the number of registered smokers in the surgery by making them realise the health dangers of their smoking behaviour (respiratory & cardiovascular diseases), the benefits of stopping smoking which include a healthier and longer life and making them feel competent to succeed at changing their behaviour. Ajzen and Fishbein (1980) theory of reasoned action also incorporate these strategies. I will also provide them with self – help material and referral to more intensive support such as Stop Smoking England. It is also essential for me to provide them with on-going support in terms of positive reinforcement and reassurance.

A routine is a prescribed, detailed course of action to be followed in regularly (thefreedictionary.com, 2014). In relation to healthy living these include regular bed times, eating regularly, having regular exercises as well as regular periods of rest and relaxation. According to Healthskills (2011) having a routine which integrates the body’s requirements helps to keep the body functioning at a physiological level. The 5 – day plan to quit smoking originally published by McFarland and Folkenberg (1964) and endorsed by the WHO is based on replacing the smoking habit with a new set of routine habits.

These include eating a balanced diet, drinking six to eight glasses of water daily, regular exercise three to five days weekly, having adequate rest, sleep and relaxation while avoiding overeating, alcohol, tea and energy drinks. The client is also to avoid places where others smoke, think of the benefits of not smoking and affirming to himself “I choose not to smoke”. These routines will help the individual to quit smoking and to reap the benefits of not smoking which include avoidance of cancer, heart attack, impotence, infertility and premature skin wrinkles. These are in addition to getting rid of bad smell and saving money. 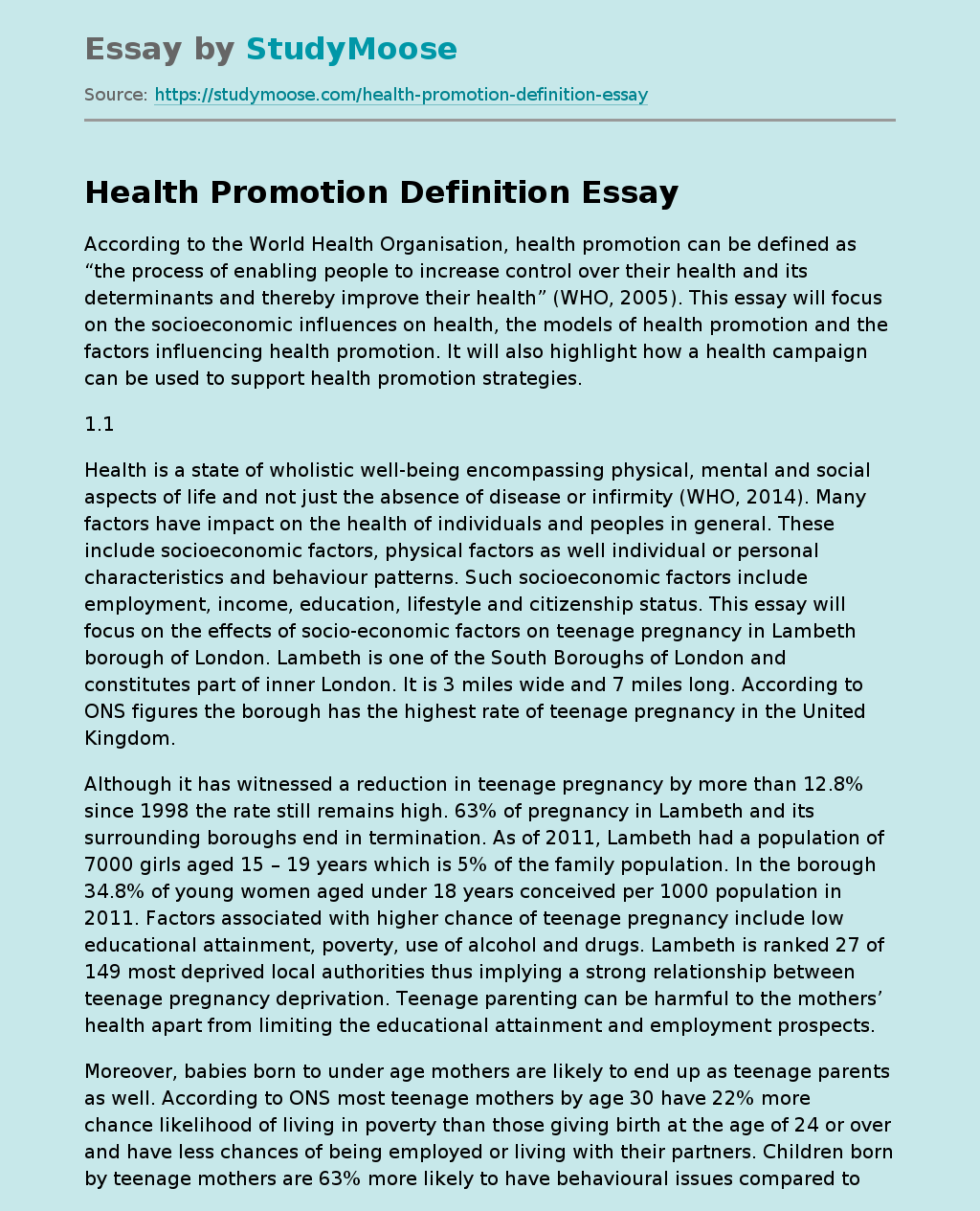