A Critique of a health promotion tool

The purpose of this essay is to critically analyse a health education resource, to show knowledge and understanding of the use of health behaviour models and to understand the concept of health promotion. The health education resource chosen by the author is presented in the form of a leaflet promoting breast awareness. Health promotion is “any planned combination of educational, political, environmental, regulatory, or organisational mechanisms that support actions and conditions of living conductive to the health of individuals, groups and communities”.

Don't use plagiarized sources. Get your custom essay on
“ A Critique of a health promotion tool ”
Get custom paper
NEW! smart matching with writer

(Joint Committee, 2001, p.101). The purpose of health promotion is to encourage the adoption of “healthy” behaviours. Health promotion is made up of 3 main concepts, which are Health education, Health protection and Prevention of disease, these also referred to as the health triad. There are many factors which may affect the implementation of health promotion, these are: educational background, sociocultural contexts, demographic position, attitudes, behaviour, socioeconomic groups and beliefs.

Even though health promotion was being practiced in the 18th century, the most relevant changes have occurred in the past 20 years, this is primarily due to a change in the emphasis of health care. Health become more about prevention of illness rather than treatment in the early 1980’s, this paradigm shift in emphasis is directly related to cost benefits from health promotion and the change of responsibility for health onto the individual rather than the establishment (Health professionals).

Health has been defined as: “a state of complete physical, mental and social wellbeing and merely the absence of disease or infirmity”. Health consists of five dimensions, which are: Physical health, Emotional health, Social health, Mental health and Spiritual health.

Health promotion is a fundamental component of the health care systems. The health promotion relies on the health triad model, which consists of 3main domains as mentioned above in the introduction. The author will now go into more detail about these three domains. Health education – All aspects of positive health education are comprised in the domain. This includes helping individuals, groups or communities develop positive health impute, such as self-esteem and life skills by influencing behaviour (Butler, 2001).

Health Protection – This domain focuses on the increase of positive health and the prevention of ill health. It also comprises regulations and policies (Downie et al 1998).

Disease Prevention – Planning and measures taken to stop disease or health problems before health event occur. This domain is split into three levels of prevention: primary, secondary and tertiary. Primary prevention – seeks to stop the onset of illness or injury during the pre-pathogenesis period.

A model is a framework used as a tool in health promotion to plan actions. Health behaviour is the focus of health promotion models, is to promote health successfully the models purpose is to promote a change in the individuals behaviours or to adopt new behaviours. Behaviours are modified by a number of internal and external factors, such as demographic variables e.g. gender, age, socio-psychological variables e.g. personality, social class and structural variables e.g. Knowledge about disease (Butler, 2001). There are numerous models used in health promotion but the author is going to concentrate on 3 of these models. The first model the author is going to look at is “The Health Belief Model” (HBM). The HBM is one the first behavioural change models to be developed; it is one of the most influential approaches to explaining health related behaviour.

The second model the author is going to look at is the Transtheoretical Model. This model is also referred to as the Stages of Change Model. In this model behaviour change is viewed as a process which concentrates on the individual’s readiness to change. The difference with this specific model is that it is a cyclical process. Client’s often drop out of the interventions but may later re-enter where they left off or alternatively return to the initial stages. According to this model the are 5 stages of change: Pre-contemplation – not thinking about changing behaviour, Contemplation – thinking about changing behaviour in the near future, decision – making a plan to change behaviour, Maintenance – continuation of behaviour change. This model is most commonly associated with secondary prevention such as smoking, alcoholism, drugs abuse. Exercise and dietary change (Butler 2001). The third and final model the author is going to look at is the Diagram of Reasoned Action (Appendix 1) which interlinks with the diagram of theory of Planned Behaviour (TPB) (Appendix 2).

The above models consist of attitudes towards the behaviour, subjective norms, intention and behaviour but the TBP also includes perceived behavioural control. The purpose of both of these frameworks is not to study behaviour itself but to study attitudes towards behaviours. These models are most commonly associated with primary and tertiary preventions, primary preventions such as immunisation, contraception and nutrition, tertiary preventions such as smoking cessation, Coronary Heart Disease (CHD) Human Immuno Deficiency Virus (HIV) Auto Immune Disease Syndrome (AIDS) (Cottrell, 2002). In the United Kingdom (UK) approximately 1 in 12 women will develop breast cancer at some time in their lives. There are 25,000 new cases and 15,000 deaths due to breast cancer annually; approximately one percent of breast cancer incidence occurs in men.

The main risk factors associated with breast cancer are as follows: Family history, increasing age, late menopause, first child after 30 years of age, nuliparity (no pregnancies), social class (this is the most significant risk factor), and geographical location (e.g. UK has higher mortality than Japan). Other factors which are under evaluation are, stress, high alcohol intake and high – fat diet. (Alexander et al 2000). The incidence of breast cancer in women very rarely falls below the age of 35 years, rates being to increase steadily from then, affecting over 300 of 100,000 of the population by the time women reach the age of 85 years. The greatest numbers of women are diagnosed between the ages of 45 and 65 years of age. Breast cancer in men is almost always detected beyond the age of 65 years (Alexander et al 2000). As a requirement of this health promotion essay the author h

As chosen a breast awareness leaflet to critically analyse. When critically analysing a health promotion resource, there are 5 important points to consider: links – The material should contain obvious and direct links to the discussion, Intelligibility – The material Should be understandable and a reasonable learning resource, the use of complex language and over long sentences or statements should be avoided to maintain concentration, print size should be of a reasonable size to prevent audience squinting to read the text and the font also should be pick with care such as sans seril (e.g. Ariel) use of pictures and diagrams. Colours should also be appropriate to the subject e.g. discreet subject, plain neutral colours, should be chosen. General style – style of the material should remain consistent to avoid distractions. Highlighting – This is a useful way of emphasising important points. Some methods of highlighting are bold text, underlining, changing colour of the text, shaded area of importance.

Targeting – This is aiming at the target audience e.g. age, gender. In relation to the leaflet the author is going to critically analyse the leaflet using the 5 points above. : Links – All points of the discussion mentioned in the leaflet were relevant to breast awareness. Intelligility – simple language is used throughout the leaflet although sentences so tend to be long winded/ Print size is of a reasonably readable size, the fonts is reasonable and consistent, two pictures are included in the leaflets but the audience would have benefited more from diagrams as the pictures were not self explanatory, the front cover is appealing to the eye (see Appendix) and relevant to the subject, the background is purple which fades in form the top to the bottom and the pink ribbon which is the motif for the breast cancer this make the leaflet automatically recognisable to a person who was looking for a leaflet on this topic, yet not necessarily noticed by someone who isn’t.

Breast awareness is printed in white, with fairly large print size and an acceptable if muted font. The front cover specifies the main purpose of the leaflet is to provide information and support; there is also a clear indication of who is promoting this learning resource. General style – The style and format of the leaflet is consistent from start to finish. Highlighting – Highlighting was used throughout the leaflet to determine headings and subheadings this was achieved by changing the print colour to purple. Shading was also used to highlight important points. Targeting – The target audience of this learning resource is women, although men are briefly mentioned. The author feels that the leaflet would most likely be targeting women from quite a young age as it is a precautionary action so the quicker adaptation to new behaviours are absorbed the earlier the individual becomes familiar the there own breast and what normal form them.

A Critique of a health promotion tool. (2016, Jun 27). Retrieved from https://studymoose.com/a-critique-of-a-health-promotion-tool-essay 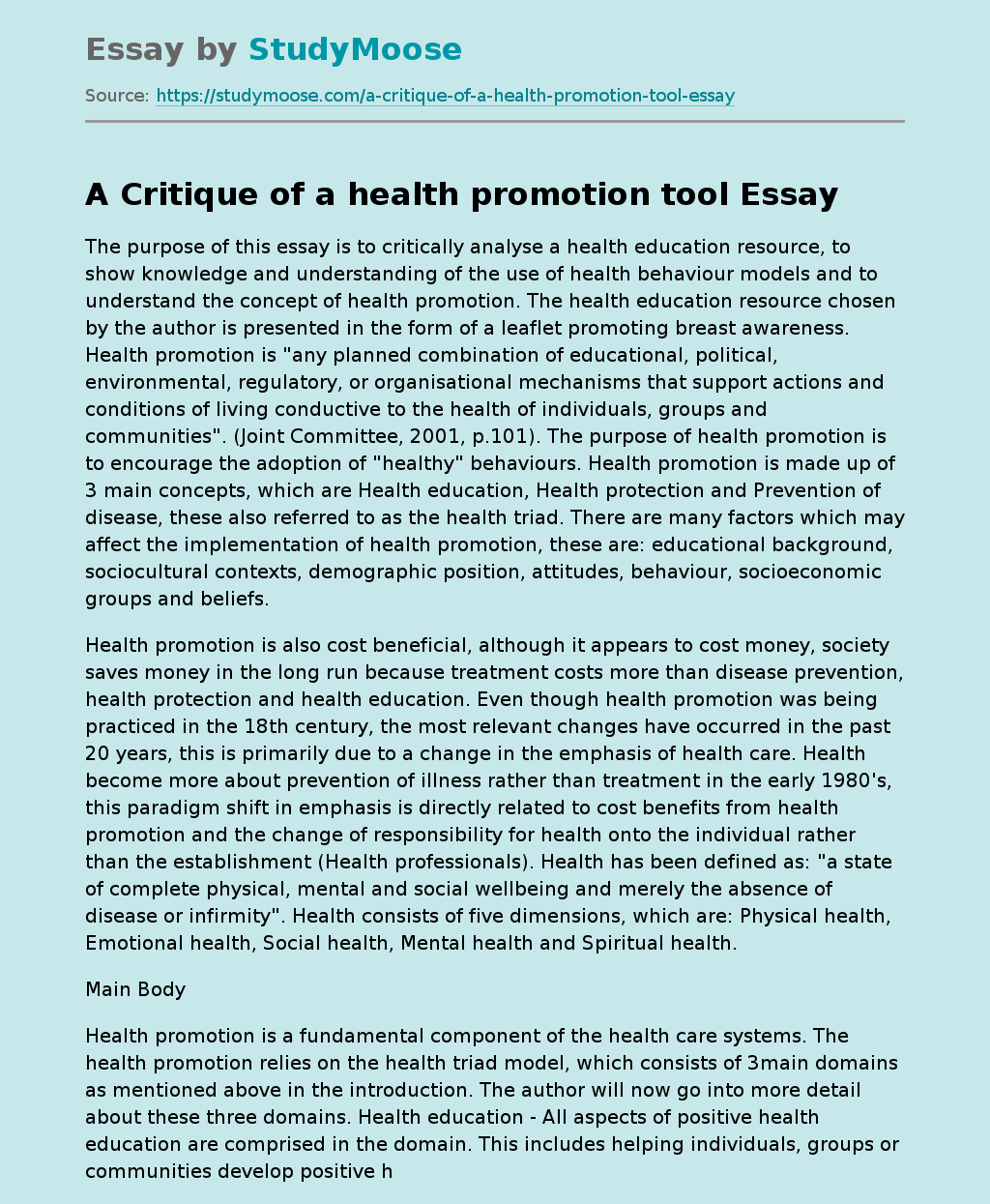