For this piece of coursework I will be writing and comparing the strange case of Dr. Jekyll and Mr. Hyde, with that of Merry Shelley’s Frankenstein.

I will be comparing how each monster came about and the relation between thenIntroduction:Victor Frankenstein is a scientist obsessed with trying to create life and stop death, to do this he collects parts of the body from corpses and charnel houses.

When he has finally completed his human jigsaw he animates the creature using a powerful lightning storm.

Don't use plagiarized sources. Get your custom essay on
“ “Dr. Jekyll and Mr. Hyde” and Merry Shelley’s “Frankenstein” ”
Get custom paper
NEW! smart matching with writer

Shortly after the creature is animated and Frankenstein has completed his goal, he is shocked to find that his creature isn’t what he planned.

Instead of creating eternal life, he created a monster which kills his family, and closet friends.

The strange case of Dr. Jekyll and Mr. Hyde is about a well-respected scientist of London who believes that separating the two men can become liberated. He succeeds in his experiments with chemicals to accomplish this and transforms into Hyde to commit horrendous crimes.

Jekyll tries to relinquish the potion but cant so he takes his own life.

Comparison:Both Dr. Jekyll and Mr. Hyde and Frankenstein tell tales of scientists abusing their creative powers to exist in another sphere where they cannot be directly blamed for their actions .Though Frankenstein’s creation is a creature distinct from his creator while Dr. Jekyll transforms into Mr. Hyde ,the double of each protagonist progressively growsThe stories are very similar in the fact that both create a monster, though Jekyll releases the monster inside him, whilst Frankenstein on the other hand, creates a monster.

Both monsters create havoc and there first target is a child. The difference though between the two monsters is that Jekyll created his being to commit such offences, but Frankenstein created his monster just to push the boundaries of death.

Both creators react different to there monster, Jekyll intended for his monster to be evil, as he wanted to release his inner evil, without the guild of his criminal activity,Frankenstein on the other hand, was disgusted by the hideous site of his monster, at first glance; he called his creation a beast.

ConclusionIn my opinion both stories are extremely similar in the fact that it involves two scientists isolating themselves to create a monster, which causes mayhem and disaster. Both evil monsters target a child for there first murder casualty.

Though the stories are very similar they are also very different.

Both contain monsters that cause disaster but, Frankenstein didn’t intend his monster to be evil, as Jekyll did.

Frankenstein just wanted to create a being that could surpass death, so he wouldn’t suffer death again. Whilst Jekyll wanted to release his inner evil. 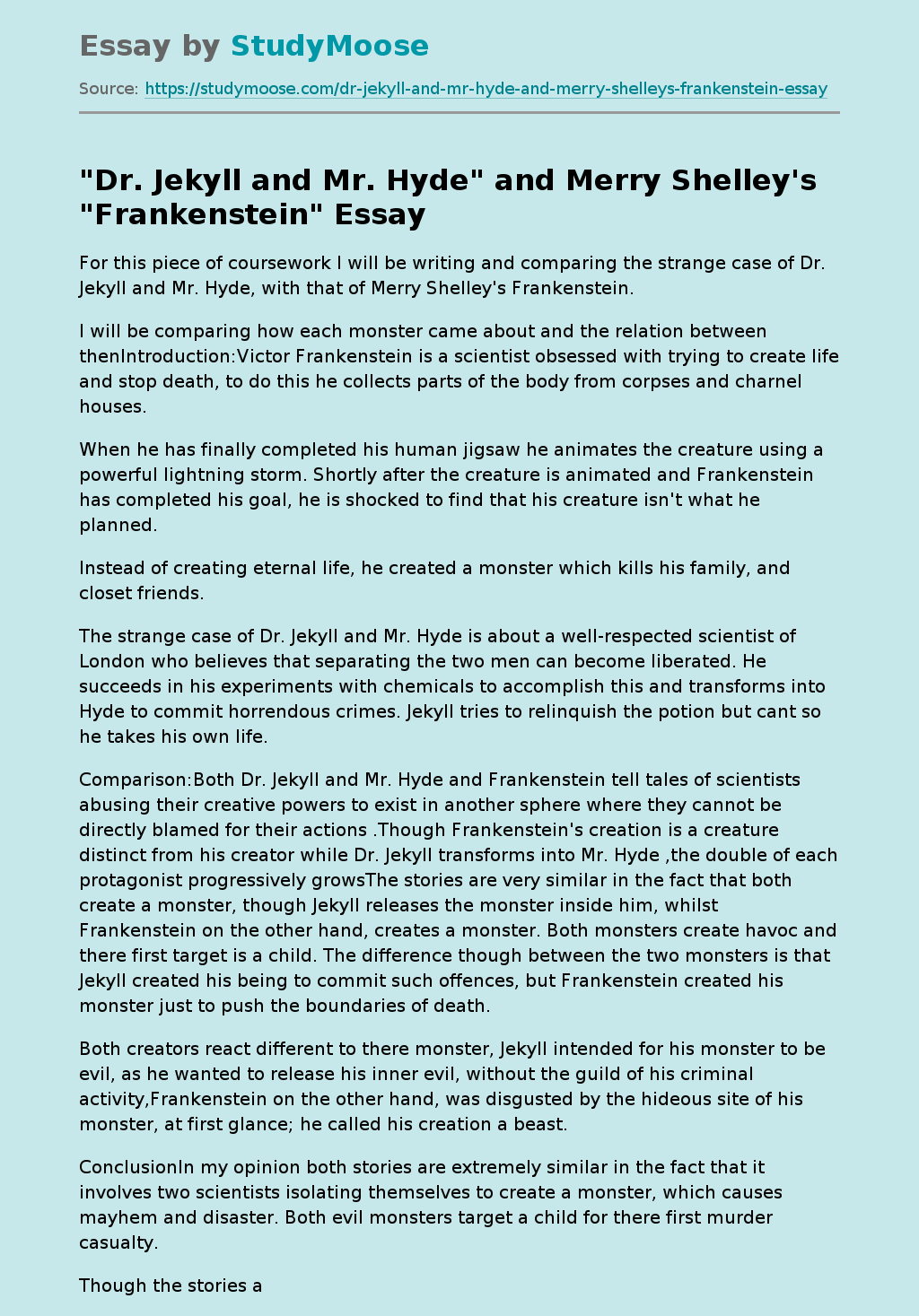