The struggle between Dr Jekyll and Mr Hyde reflects upon the duality of man, in between good and evil.

Robert Louis Stevenson wrote the novel in the 1800 where T.V and other forms of entertainment didn’t exit, therefore the Victorian audience, found it entertaining to read.

However, despite this public decency, Stevenson appears to be suggesting that underneath the surface, people’s behaviour was not quite as respectable as it should be.

Don't use plagiarized sources. Get your custom essay on
“ Dual nature of Dr Jekyll and Mr Hyde and the duality between good and evil ”
Get custom paper
NEW! smart matching with writer

Stevenson believed that there is light and dark in all of mankind- man is not truly one, but truly two.

Most of the characters are seem as having professions considered to be important and influenced, such as lawyers, doctors and politicians, all representing respectability.

Mr Jekyll liked to indulge in pleasures but his status prevented him to do so, he creates an alter ego for himself to live out his passions.

Dr Jekyll dependence on Mr Hyde became an addiction, although Jekyll says that he ‘can be rid of Mr Hyde at any point’ his lack of control helps Mr Hyde to over power him and take over.

Robert Louis Stevenson was born and bread in Edinburgh. He was a very sick boy thought his childhood which had confined him to a bed. His nurse used to read to him the Pilgrims Progress and the Old Testament, telling him stories about evil, causing him to suffer nightmares. Stevenson grew up in Edinburgh which itself had two faces on one hand the modest, religious and respectable ‘New Town’ and on the other hand a bohemian Edinburgh- the dark one.

This Edinburgh was symbolized with brothels and shadiness. The contrast of the two was a bit like the nature of Dr Jekyll and Mr Hyde.

The story of Dr Jekyll and Mr Hyde is largely allegorical. In the first chapter we see the theme of duality when the two characters Utterrson and Enfield are a taking a walk and they see a door which described as ‘bore in every feature the marks of prolonged and sordid negligence’. The door stood out from the rest of the street because all the other buildings were well kept.

Mr Enfield has a flash back, he remembers the time Mr Hyde tramples over the girl and describes him as a ‘juggernaut’. The first victim of Hyde was the little girl. I think the reason why Stevenson chose a little to be the first victim of Hyde is because a child represents innocence and he is trying to say that Hyde is pure evil with a cold heart.

The description of the street reinforces the theme of duality because it is a dingy neighbourhood and there are shops like ‘rows of smiling women’ this raises a question why is Dr Jekyll living in a tawdry neighbourhood.

Jekyll appearance is a lot different from Hyde he is smoothed face where as Hyde looks as if though he is deformed and short. I think the reason why Hyde is short is because the evil side of Dr Jekyll hasn’t developed properly.

Hyde becomes Jekyll’s demonic, monstrous self. Stevenson presents him as such from the outset. Hissing as he speaks, Hyde has a kind of black sneering coolness….’like satin’. He also strikes those who witness him as being deformed, ‘pale and dwarfish’

As the story progresses, Hyde becomes more and more violent, culminating with the death of Sir O.Carew.

The maid describes the murder as horrific but before the murder there is a pleasant description of the setting ‘the soft, clear night, the romantic nature of the maid, the full moon, and the sweet loveliness of the old man’. This is another example of the use of duality and the theme of good and evil because Stevenson describes the setting with a romantic aroma ‘full moon’ but then everything changes from good to evil.

The horrific description of the murder includes a ‘storm of blows’ and bones being ‘audibly shattered’ once again Hyde is described as ‘disgusting looking’. The description implies Stevenson views of the world of certain, inherent evilness in people, something that can be detected by merely glancing at a person. Stevenson explores the theme of double through symbols and characters.

Most of the novel is set at night, and the fog becomes almost a character hiding people in the city.

Where ever wine is present there is positive happening but it can also symbolize evil because too much wine can transform a person making him drunk. This happens to be like Dr Jekyll and Mr Hyde, when he drinks the potion.

Stevenson tries to create an atmosphere which is based on (emphasise) tension between order and disorder-duality. He finds the truth. However, even Utterson seems to have a double life, and in his quest he examines his own conscience “and the lawyer, scared by the thought, brooded a while in his own past, groping in all the corners of memory, lest by chance some Jack-in-the-Box of an old iniquity should leap to light there”

Dr Lanyon dies because he was exposed to the pure evilness of Jekyll’s experiment that went wrong. The evil, Jekyll created, killed Dr Lanyon, indirectly. When forced to confront his divided self, Lanyon could not bear to think that he may have his own Mr Hyde in him. So he kills himself.

Dual nature of Dr Jekyll and Mr Hyde and the duality between good and evil. (2017, Nov 04). Retrieved from https://studymoose.com/dual-nature-of-dr-jekyll-and-mr-hyde-and-the-duality-between-good-and-evil-essay 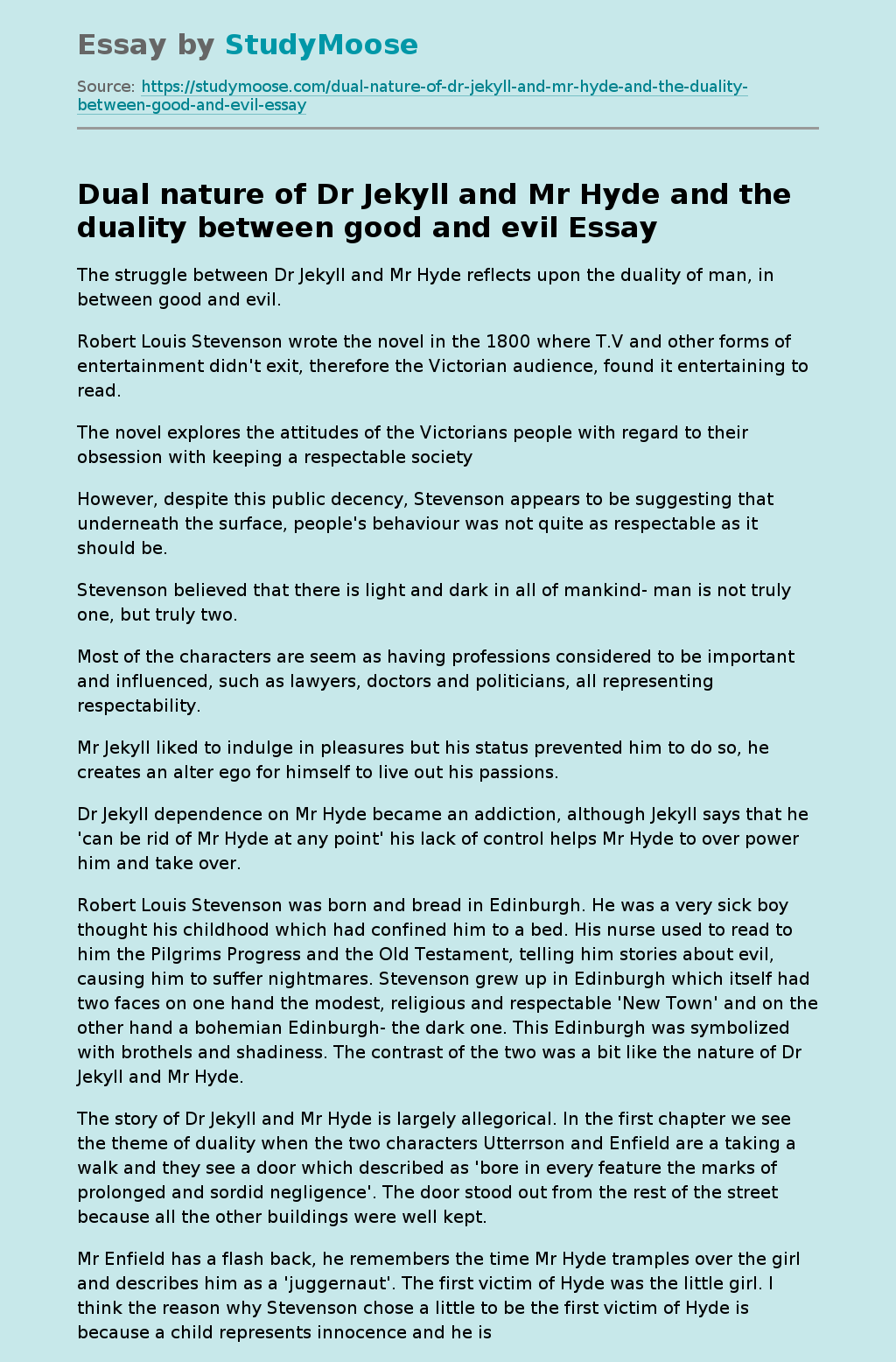