How does Stevenson present conflict between good and evil in Dr. Jekyll and Mr. Hyde?

Robert Louis Stevenson was born November 13,1850, in Edinburgh, Scotland. He had heath problems. Stevenson attended Edinburgh university as a science student, because his parents wanted him to be a Civil engineer. However, Robert had other plans. He wanted to become a writer. This made his parent upset.

In the late 19th century, Robert Louis Stevenson wrote the novella “Dr. Jekyll and Mr. Hyde.” The title of the book could mean “Je” which in French means “I” and “Kyll” which could also be written as “kill”.

Don't use plagiarized sources. Get your custom essay on
“ How does Stevenson present conflict between good and evil in Dr. Jekyll and Mr. Hyde? ”
Get custom paper
NEW! smart matching with writer

The title meaning is “I kill and hide”, this novella has a powerful title and it relates much about the novella. This is because when Jekyll turns into Hyde he has the chance to express the bad side of himself. Forexample when Hyde kills Sir Danvers Carew. In the book Sir Danvers was killed for no reason. This means that when Jekyll turns into Hyde he is expressing his bad side.

The novella was set in the Victorian London.

In that time people were divided into class(upper and lower class). However, they also had the hypocritical believe, this means that they strongly believe in God. For that reason when Jekyll turned into Hyde it meant that Jekyll was playing with God’s creation.

In the novella, Stevenson present the conflict between good and Evil in many different ways. He relates the book to him self as he claims ” Jekyll had more than a father’s interest; Hyde had more than a son’s indifference”, this quote means that Jekyll cared much about things but Hyde however lack interest and care.

This quote relates to the conflict that happened between him and his dad.

The novella has numerous of narratives to build up suspense. Stevenson uses, elaborate description, dialogue, multiple narrators and the novella starts with third person’s narrator, who is Utterson. In the last two chapters however, which are Lanyon and Jekyll’s reports their experience from their own point of view. The narrator knows most things before we do. We know this when it states “a year later” at the start of a chapter, this quote shows that we don’t know what happened and it jumps a whole year of information. Meaning that it gives us very little information. It build suspense, and creates a gothic atmosphere.

The novella follows Utterson’s point of view; this make the book more interesting. He makes the novella interesting because all the event that he faces that is the novella, that is the event we face as well. It also builds and mystery and leads us to wrong conclusion, and delays our understanding. Utterson is also the character in the novella with the ego, because he always tries to understand Jekyll’s behaviour.

Jekyll thinks that everyone has two sides, which are the good and the evil. Therefore he tries to play God by wanting to separate the two from each other. As a doctor every one expect you to be a good person. However, Dr. Jekyll wanted to experience the bad side of himself. When Jekyll says “though so profound a double-dealer”, this quote confess to us that he was a “double-dealer” meaning that he was Hyde. This also shows that Jekyll wears a mask.

Stevenson uses the weather as a symbol to represent the atmosphere in the book, “a fog rolled over the city”. the quote uses the word “fog” , this shows that the city is hiding things and it is very secretive because it is very difficult to see through fog, which is the clouds of the truth. As readers when we read this we get the impression that the city has a lot of unravelled secrets.

Louis also uses windows and doors to represent a persons character, “a blind forehead of discoloured wall on the upper”, the quote suggest that Hyde’s house was not well looked after. It continues with “blistered and distained”, this reflects on the windows, that they are not cleaned. This reflect to Hyde’s character as he was not a clean person and did things that are not clean. This quote also reflect back to the Victorian, as they use to judge people by their outer appearance. This meant that if you were an ugly person you were evil. We experience this when Utterson first saw Hyde and when he said he was ” so ugly that it brought out the sweat on me like running.”, This quote admit to us readers that Hyde was a very ugly person.

The quote also uses the word “running”, this word is very strong in the quote because it is the word that exaggerates how ugly Hyde was. In addition he did not just wanted to run away from Hyde because he was ugly but because of his believe Hyde was evil too. As readers when we read this it makes us think back to the title of the novella, “Dr. Jekyll and Mr. Hyde”, a Doctor is seems to be a nice and innocent person; on the other hand, Mr. Hyde is a person that according to his name is someone who hides, he someone who does not want to bee seen.

In the novella Hyde enters the house from the back door to Jekyll house, and Jekyll enters the house from the front door, “two doors from one corner”, this quote shows that if people looked at Jekyll’s house it is just one house but it has two doors. As a reader when we read this it leaves us in confusion, because we don’t know that if Jekyll’s house was made like how it is because he always had in mind that he was going to separate the god from evil.

” The door, which was equipped with neither bell nor knocker”, this quote describe Hyde’s personality because he does not want to be seen so his door was not equipped. In addition this could mean that the back door which lead to the lab could represent hell and the front door which lead to the quite part of the house could represent heaven. This is because in hell that is where bad things happens and Hyde’s entrance to the house is the lab that is where Jekyll makes the dose for himself to turn to Hyde, who is the evil side of Jekyll. Nevertheless, when Jekyll enters the house it is the normal and peaceful entrance of the house.

Jekyll has an addiction to Hyde, “my devil had long being caged, he came out roaring”, this quote suggest Jekyll’s addiction to Hyde. When the quote states “he came out roaring”, this part of the quote uses anima imagery and it also relates to people who take drugs, alcohol, cigarettes when they take all these stuff his body ask for more and more just like Jekyll’s body ask for more.

The weather, most of the times sets the mood in the book, when Hyde became a murderer, Stevenson used the moon along with clouds to represent the atmosphere, “…was brilliantly lit by the full moon”, this quote reflect to the genre of the book which is gothic horror. This is because when you what watch horror movies it has full moon’s most of the times.

At the end of the novella when Jekyll makes his statement, he confess about the idea of him playing the role of God, by separating the good form the evil. When Jekyll first turns into Hyde he feels happy and enjoys the feeling we now this when he says “at the first breath of this new life, to be more wicked, tenfold more wicked” , this quote shows that Jekyll enjoyed the feeling and the thinks he did when he was “on drugs” . The quote also suggest that it was Jekyll’s intention to turn into Hyde.

The book is still relevant today as many doctors and scientist are trying to play God. They do this with GM foods, cloning, steam cells and embryos. Personally as a reader I think that Jekyll had no right to play God especially in his time when people where very religious. If Jekyll really wanted to show people that he had two sides he should have just shown it , instead of transforming himself into a different character. This also shows that Jekyll had a strong felling about how people thought about him as a Doctor. Since no one is perfect Jekyll should have act as a normal human like anyone else and shown his bad side when he needed to.

How does Stevenson present conflict between good and evil in Dr. Jekyll and Mr. Hyde?. (2017, Nov 04). Retrieved from https://studymoose.com/how-does-stevenson-present-conflict-between-good-and-evil-in-dr-jekyll-and-mr-hyde-essay 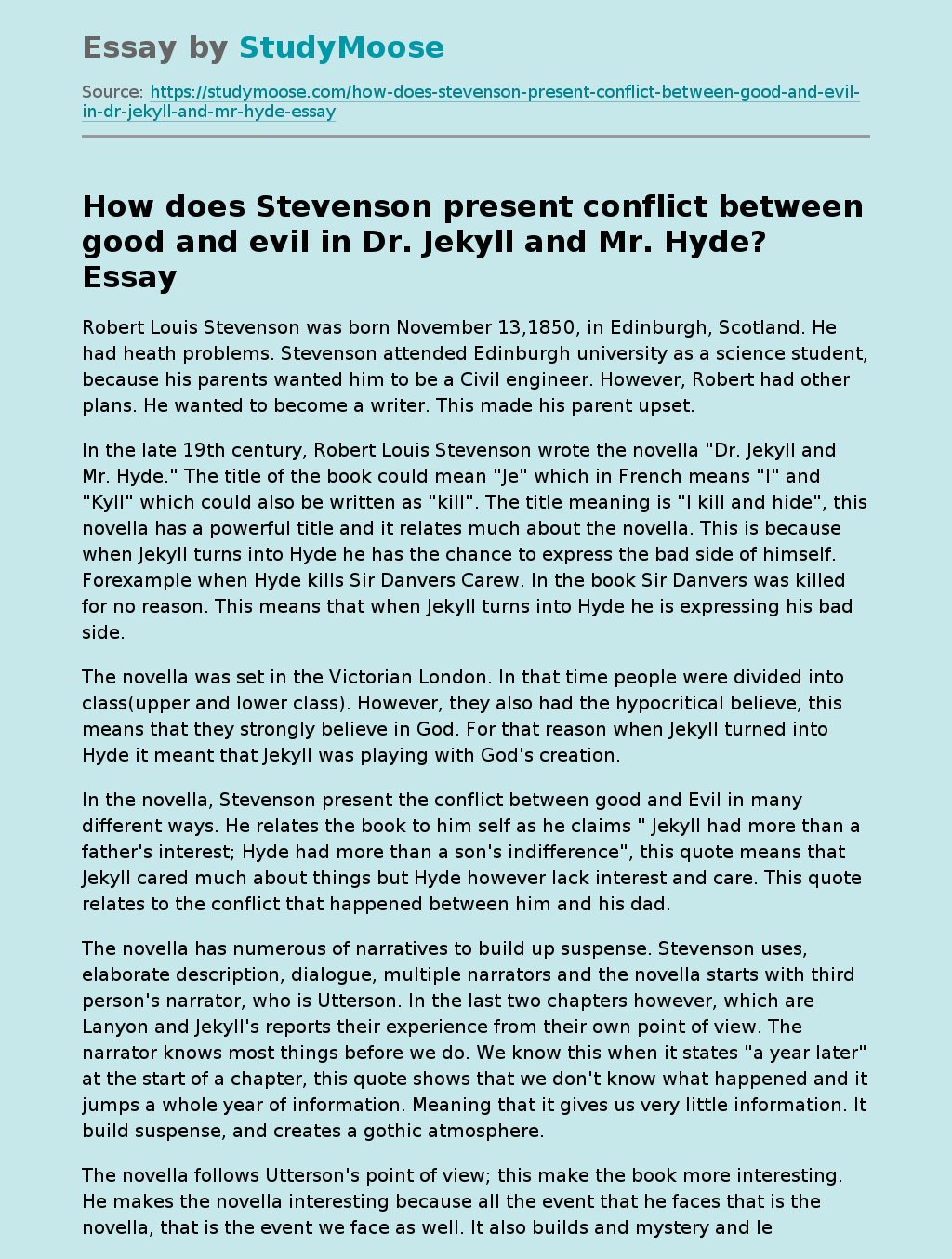