The Stevenson classic of "Dr. Jekyll and Mr. Hyde"

In our G. C. S. E English class, we have been reading the Stevenson classic of Dr. Jekyll and Mr. Hyde. Whist reading this, we have been discussing how effective the book is as gothic literature and now we have to write an essay around the question, including the elements of a gothic narrative and how Jekyll changed when he got older. First of all, I will talk about a gothic setting.

Similarity to Frankenstein (by Mary Shelley)

Before reading the book, when I knew nothing about the story I thought it would be similar to Frankenstein (by Mary Shelley) and that it would have an Eastern European Eastern Europe type of setting, concentrating around graveyards a lot of the time but I was very wrong.

Don't use plagiarized sources. Get your custom essay on
“ The Stevenson classic of “Dr. Jekyll and Mr. Hyde” ”
Get custom paper
NEW! smart matching with writer

It is mostly set in laboratories or in the dark streets of Victorian Scotland. In the text it explains the whole setting of back street Scotland best in this section, “Round the corner from the by street there was a square of ancient handsome houses now for the most part decayed from their high estate and left in flats and chambers to all sorts and conditions of men.

The quotation explains that, although the by street did once look nice and well cared for it is now old looking and decayed. The setting in this part of the book can be compared to the gargoyles on the buildings in the Hunch Back of Notre Dame. Now I will consider the element of character. In gothic narratives it is not all about what they do, it is how the author describes them.

The comparison that pops to my mind when I think of a gothic character is a big, shadowy, ugly, evil, killing monster, just like Hyde!

One of the most obvious characters to describe at this point is Dr.Frankenstein’s monster because he is a pure killing machine with no-soul. Mr. Hyde is a lot like the monster apart from the considerable height difference. He is a dark, tramp-like person without a soul. He is also an experiment, like Frankenstein’s monster, but I think the suggestion is that Jekyll is addicted to the drug, unlike Frankenstein which is not a person itself but made up of all different types of people. The quotes to support this, from the text are “It wasn’t like a man; it was like a damned Juggernaut!”

“Ape-like fury,” and “Like a mad man. ” The quotations occur when Hyde walked all over that poor little girl, the author made you want to hate Mr. Hyde straight away but unlike in Frankenstein, they don’t try and make you feel sorry for the evil killer, but in fact, it makes you feel worse for Jekyll. The next important gothic element is atmosphere. The atmosphere in Jekyll and Hyde is very tense as for most of the story you are trying to find out how and when Hyde will be caught.

The story I think is based strongly around the main characters already knowing that Hyde is Jekyll. I think gothic atmosphere can be summed up in the section of the book when Carew is killed by Hyde. The calm conversation disintegrates into a murder right in front of the maid’s eyes. She is just nicely getting on with her job, gazing over the street when Hyde suddenly jumps on poor Carew and he stands no chance. The next element of gothic literature I will be explaining, will be suspense.

In Dr.Jekyll and Mr. Hyde, the point at which Utterson is about to find Dr. Jekyll, the suspense is almost tangible because the reader does not know what is going to be behind the door. “Down with the door, Poole! Poole swung the axe over his shoulder; the blow shook the building, and the red baize door leaped against the lock and hinges. ” I think this quotation is very powerful in showing suspense of the highest rank. One of the strongest elements of gothic writing can be seen in Stevenson’s use of imagery.

The imagery in this book is best, I think, when it is used to describe the Victorian streets. “The fog still slept on the wing above the drowned city, where the lamps glimmered like carbuncles….. the town’s life was still rolling in through the great arteries with a sound as of a mighty wind”. I have also noticed that Stevenson often uses animals as imagery as you can see. The use of gothic language is an important element in this type of literature. In the novel, Stevenson uses very particular language, similar to Dickens, to build up layers of tension, like a cake.

“He was the usual cut-and-dry apothecary, of no particular age and colour, with a strong Edinburgh accent, and about as emotional as a bagpipe. ” This character is made out to be a very common person in this setting, though the narrator described him as a “juggernaut”. In a gothic novel, the plot always seems to be in suspense. Nothing very much happens, there is a lot of clever talk and diary entries to place fear in the heart of the reader, but we never actually witnessed Hyde ‘killing’ Jekyll because Jekyll needed to take his own life to ‘set Hyde free’.

“Here then, as I lay down the pen and proceed to seal up my confession, I bring the life of that unhappy Henry Jekyll to an end. ” The character of Jekyll changed through the novel but because we are not allowed to know him, this is shown through the conversations between his friends. ” … ten years since… Henry Jekyll became too fanciful for me. He began to go wrong, wrong in the mind. ” You get the feeling that they think that the doctor is under Mr. Hyde’s control. 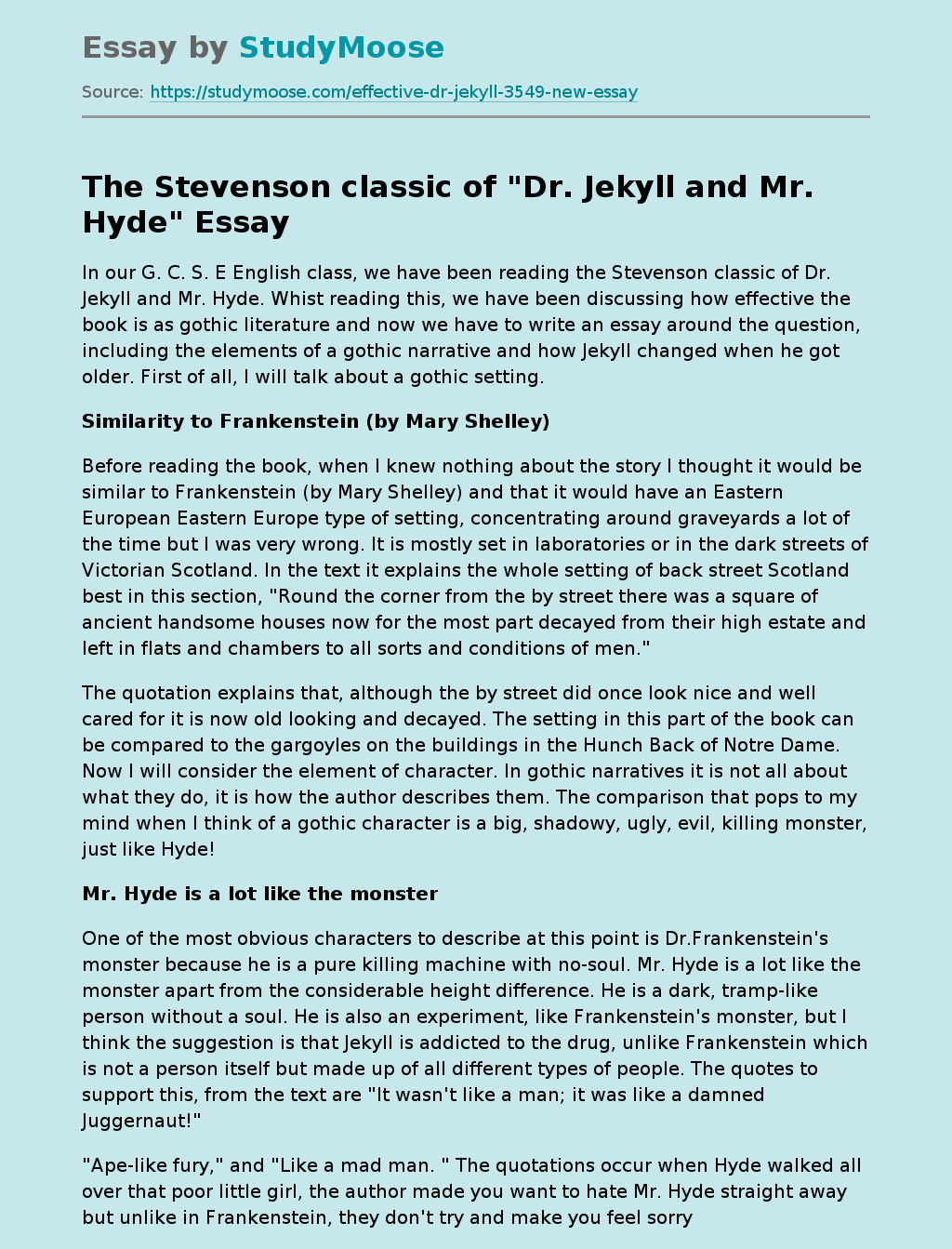