The Representation of evil in Robert Louis Stevenson's "Dr. Jekyll and Mr. Hyde"

In 1886, Robert Louis Stevenson published his short novel “The Strange Case of Dr. Jekyll and Mr. Hyde”. A recurring theme in the novella is that of evil, a popular subject in Victorian literature as it is such an interesting concept to interpret.

The story was set in London, a city put across in the novella as being a dark, intimidating place (as most of the scenes were set in the night-time), and where otherwise respectable men and women indulged in “evil” activities such as gambling, sex, violence and drugs.

Don't use plagiarized sources. Get your custom essay on
“ The Representation of evil in Robert Louis Stevenson’s “Dr. Jekyll and Mr. Hyde” ”
Get custom paper
NEW! smart matching with writer

Stevenson makes many references to the id and ego, which Sigmund Freud wrote about earlier in the 20th century. Freud believed that the id and ego were in constant battle with one another, the id being the unfettered self, and the ego a personality you project on society. The id very much represents the “evil” side of man in Stevenson’s novella, and this is shown when the respectable Dr. Jekyll takes the potion to release Hyde, his animalistic id.

Stevenson was plagued by ill-health as a child, and was taken care of by a nurse. The nurse was a strong Christian, and thrust stories upon him of evil people burning in hell for eternity, and good people being taken to heaven. Stevenson disagreed with the belief that people were born either “good” or “evil”, rather that they were born as both. Sigmund Freud wrote that when a child is born, they are “id-ridden”, meaning that they demand instant satisfaction. He believed that as a child grows, their ego is formed around social morals, norms and taboos.

Stevenson seems to suggest that as the ego suppresses the id, the id’s affect on behavior becomes stronger, causing people to indulge in activities regarded as being “evil”.

Stevenson also uses symbolism to convey evil. The doors used by Jekyll and Hyde are an example of symbolism. In chapter 1 – ‘The Story of the Door’, Stevenson describes the door used by Hyde. ‘The door, which was equipped with neither bell nor knocker, was blistered and distained.’ This immediately gives the image of someone who doesn’t care about appearance or image. Mr. Hyde using this door shows that he isn’t respectable and he needs to ‘hide’ away. The location of the door also suggests the evil being hidden away, down a back alley, deep inside a persons mind.

I don’t believe Mr. Hyde’s actions are evil. By definition, evil actions are conscious decisions to have a negative effect on something, and that contradicts the whole concept of the id. The id is something that all humans are born with, and, as Freud wrote, does not have knowledge of good and evil, only that its desires demand instant satisfaction. What comes across to the crowd and audience as an evil action because no flicker of remorse is shown, is actually not intended.

The first time we hear about him is when we are told of a madman knocking down a small child and walking straight over her. ‘It sounds like nothing to hear, but it was hellish to see. It wasn’t like a man; it was like some damned Juggernaut.’ The phrase “juggernaut” suggests Mr. Hyde is amoral, not evil.

Hyde isn’t bothered about who or what he hurts; he doesn’t have a conscience to speak of. He never feels guilty of his actions. As he gets more out of control, he acts more like an animal, and quite insanely. “And next moment, with ape-like fury, he was trampling his victim under foot.”

When Jekyll tries to control his evil side, after a while, it doesn’t work because, as stated before, when the “evil” is suppressed it comes back more powerful than before. Jekyll starts to change into Hyde without taking the potion. Hyde is gradually taking over and Jekyll is becoming more evil. In chapter 7 we see this happening. Mr. Utterson and Mr. Enfield are standing below the window where Mr. Jekyll is sitting. Suddenly they see something which shocks and scares them; ‘froze the blood of the two gentlemen below. They saw it but for a glimpse for the window was instantly thrust down, but that glimpse had been sufficient.’ This shows that Jekyll’s evil side is increasing with time and starting to control him. It also shows that Jekyll is becoming more dependant on the antidote to stop him becoming Hyde and to keep the evil in check, rather than before, when he was using it to isolate his evil side.

Other characters always react with shock and horror to Mr. Hyde; this is because he is so repulsive looking and primitive. The image scared a lot of people and as Hyde is rude and unsociable no one likes him or is prepared to talk to him. ‘I had taken a loathing to the man at first sight.’ His appearance and manner also provoked a bad reaction from people. ‘He gave me one look, so ugly that it brought out the sweat on me like running.’ ‘The haunting sense of unexpressed deformity with which the fugitive impresses his beholders.’

Jekyll is the only person who does not react with horror at Hyde. ‘And yet when I looked upon that ugly idol in the glass, I was conscious of no repugnance, rather of a leap of welcome. This, too, was I.’ He realises that the man staring back at him from the mirror was himself in a different, more evil form. At the time Stevenson was writing the novella, people were very judgmental of those who looked different. This included people with all sorts of different disabilities, which are now widely accepted.

Back then, these ‘deformed’ people would have been shut away and often the public thought that only a deformed or evil soul could cause such deformities on the outside. These real, sadly common reactions from the late 1800s probably had a huge influence on the attitudes that Stevenson’s characters had towards Hyde in the book.

The book seems to associate evil with animal quite frequently. This can be seen in the way the book describes how Hyde acts, but also in the way he speaks, often using the term “hissed” and “croaked”. In many religions, certain animals are associated with evil, like in the bible, where a snake was personified as Satan. This can be linked to the then recently published theory of evolution, which shocked many people. Darwin’s theory stated that animals evolved, rather than being created by god, which contradicted the heavily Christian Victorians beliefs. It seems ironic that Darwin was a man of the church, trying to prove religion right.

It seems to me that Robert Louis Stevenson, while writing this novella, set out to make the repressed Victorian society think about its morals and beliefs, and, like many great writers, to challenge the public to think in a new way about themselves and the society they live in. 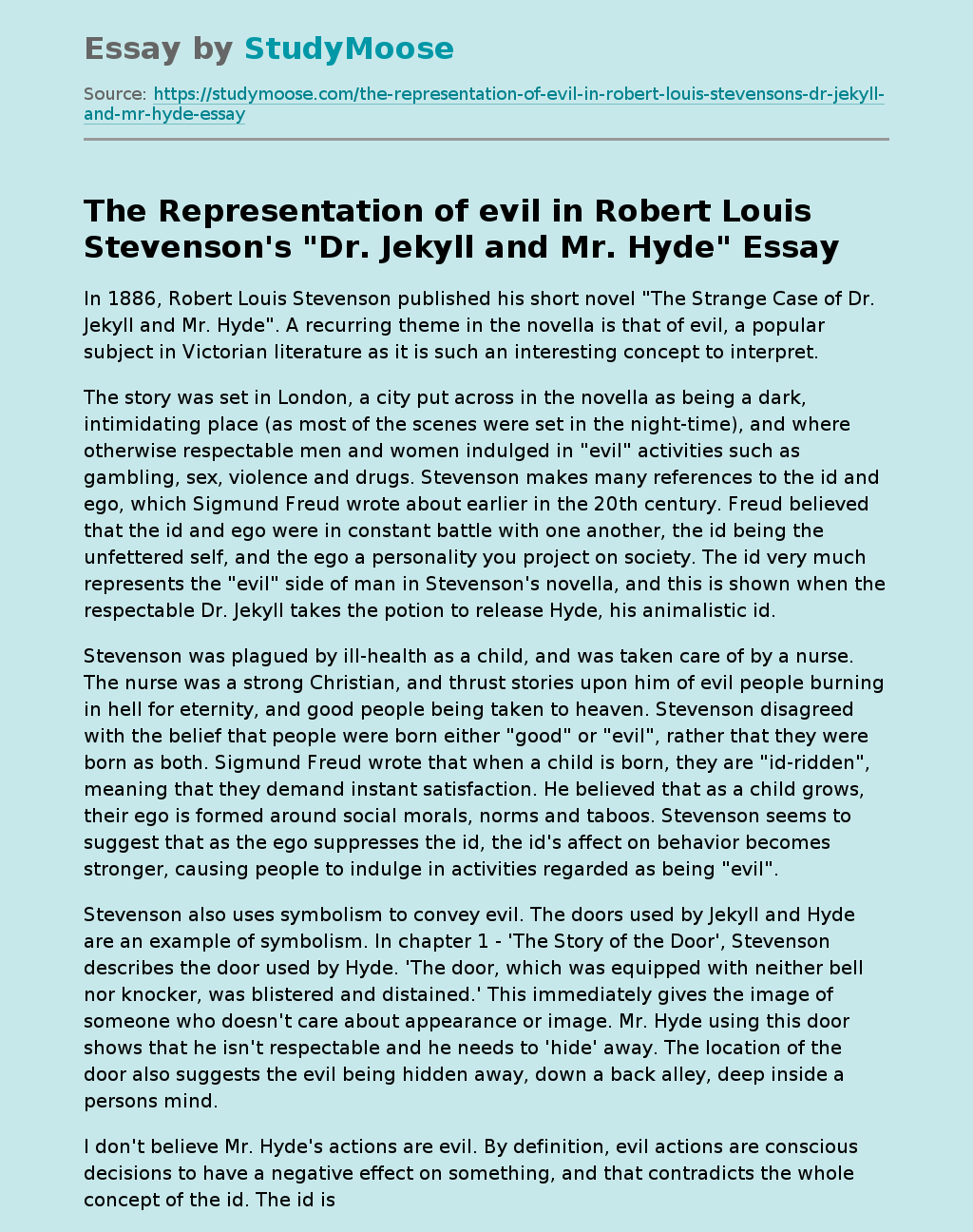