Making movies or motion pictures is not just about pure creativity and talent. More often than not, making or shooting a film is more complicated and difficult, as it demands a lot of intellectual and physical efforts. One of the most vital aspects in filmmaking is utilizing the formal elements of a movie (cinematography, mise-en-scene, editing and sound) in the most positive way that could uplift and justify the film’s overall sense and quality. This portion of filmmaking is significant and indispensable, as it provides broad impacts in the film’s core meaning and story.

Turn in your highest-quality paper
Get a qualified writer to help you with
“ Double Indemnity Film Review ”
Get high-quality paper
NEW! AI matching with writers

Just like cinematography and other movie elements, sound is arguably one of the most significant elements in any given film. Therefore, through the use of the film entitled “Double Indemnity,” which is directed by Billy Wilder, this paper would primarily tackle and analyze how the element of sound has been utilized in the said movie. More so, this would mainly examine how the element of sound contributes in providing meaning to Wilder’s adaptation of Cain’s great novella “Double Indemnity.

Double Indemnity is a 1944 film-noir, which is directed by Billy Wilder, a multitalented American artist, producer, screenwriter and filmmaker. It is his movie adaptation of the famous 1935 James Cain’s novella, which presents a unique story of love, greed and brutal violence. The film showcases the artistic roles of numerous big names in both film and television, including Barbara Stanwyck, Fred MacMurray and Edward Robinson. Just like any other great classical Hollywood movies, Double Indemnity is convincingly a classic example of what a stylish Hollywood crime drama is.

Thus, from a personal point of view, Wilder has done a sound interpretation with how movie elements should be utilized in order to achieve the most positive outcome in filmmaking as well as in rendering quality and meaning in his film. The Human Voice as an Element of Sound In a crime drama film like Double Indemnity, visual experience is not the only key to deliver a clear vision of brutality and murderous acts made by the main characters in the movie. The importance of sound element can not be disregarded, as it supports the visuals presentation of the film.

Thus, from a personal point of view, Wilder has done a sound direction in integrating both of the visual and sound element to produce distinct and powerful portrayal of each significant character in the movie. For instance, human voice, as one of the essential sound elements in Wilder’s film, has been utilized to create an emphasis on the role of every character in the movie. This type of sound element helps differentiate the characters in terms of their age, gender and designation in the story.

One good example of this is the difference between the human voice of Lola (the victim’s daughter) and Phyllis (the greedy and lustful widow of the victim). From the sound of their voices, the audience can clearly understand their difference in terms of age and maturity. Lola’s voice sounds soft and innocent, which is perfect for a childlike character that she is portrays in the story. On the other hand, Phyllis’ voice sounds lustful and powerful, which is precise to render meaning on her role as the evil character in the story.

More so, the element of sound, through human voice, has been used in Wilder’s film to give a clear picture of the feelings or emotions of the characters in the story. In one scene wherein Neff (the insurance salesman), is selling an accident insurance to the victim, the sound human voice has helped depict a clear imagery of the emotional outburst of the victim. The sound of human voice has helped showed the victim’s infuriated feelings and disappointment, as he talks in a higher tone and often yell among the characters around him. Through this approach, sound has helped create and deliver a clear imagery of emotion in every scene.

Also, the element of sound has been utilized in this film in order to support the movements of the characters. Throughout the progress of events in the story, it is obvious that sound, through voice over, supports the movements and actions of the characters. For instance, Neff’s voice over in scenes wherein he is alone or busy walking the around their office is enough to provide sounds that would describe or clearly depict what he is thinking, which renders the appropriate meaning to his visual movement. Therefore, sound has also been utilized in this film in order to give meaning and life in every action that the characters are doing.

Background Music and the Transition of Scenes

Background music, as an element of sound, has been utilized in Wilder’s film in a constant basis. As the story progresses, it is obvious that the sound of background music has been utilized in an organized pattern, wherein it often plays during the transition from one scene to another and among the scene that are lively. From a personal point of view, the thrilling sound of background music is one of Wilder’s approach to sustain the feeling of suspense throughout the progress of the story.

The stimulating music from the background has really helped create a distinct sound that would give meaning and life in the overall genre of the story, which is that of suspenseful and crime drama. More so, the strategic use of background music has created a constant feeling of anticipation throughout the progress of the film that has captured the audience interest until the end. Sound Effect and the Meaning it produces Sound effect has been a crucial part of this movie, as it helps render meaning and precision in most scenes throughout the progression of events.

For instance, the sound of screeching wheels in the very first scene provides meaning and broad understanding that Neff is in a hurry and eager to arrive in their office in order to deliver his confession to Keyes, regarding the alleged murder of Phyllis’ husband. Given that the visual representation of a car in full speed depicts some sort urgency, the sound effect of screeching wheels renders further meaning and purpose to Neff’s action, which is to get in there office as soon a possible.

The element of sound is indeed indispensable in filmmaking. As for Wilder’s film “Double Indemnity,” sound has not only been used to create meaning in every scene that is being depicted in the screen. It is also utilized in order to render life and distinction in the role of each character in the story. Likewise, the element of sound has been utilized in this film in order to support the movements and actions of the characters in best way that the audience could clearly understand and correlate the visuals that they see on the screen and the sound that they hear. 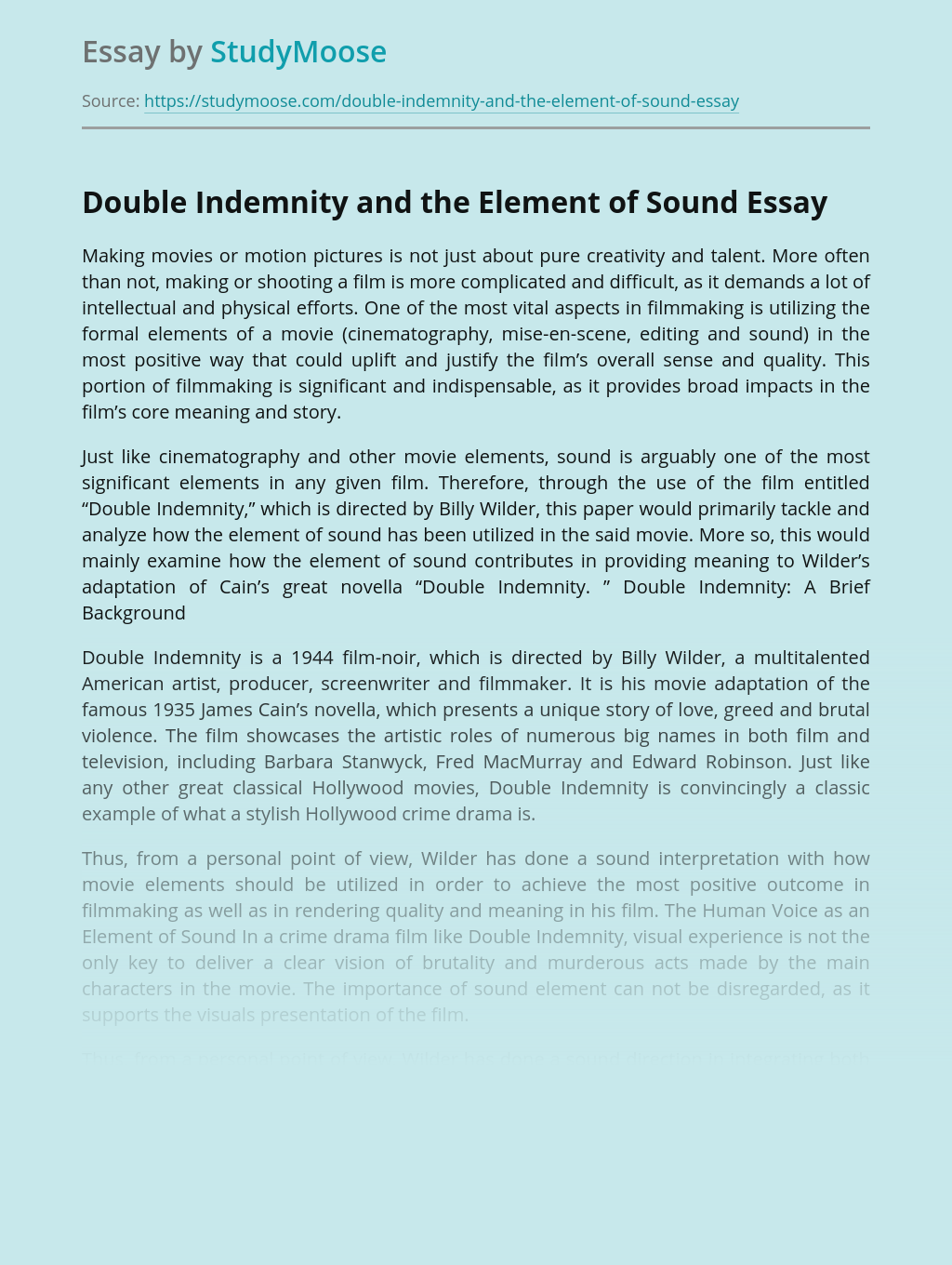 Turn in your highest-quality paper
Get a qualified writer to help you with
“ Double Indemnity Film Review ”
Get high-quality paper
Helping students since 2015
Stay Safe, Stay Original