Domestic Violence Is one of the Many Social Issues

Domestic Violence is one of the many social issues that society is faced with. Research has it that the female group is the one that becomes victimized the most and there are several strategies that have been put into place to culminate this issue of violence at home, more especially against women. One of the strategies that have been introduced in fighting domestic violence in South Africa is the Domestic Violence Act of 1998. Although this Act is one of the good moves by the government, it has many shortcomings.

Turn in your highest-quality paper
Get a qualified writer to help you with
“ Domestic Violence Is one of the Many Social Issues ”
Get high-quality paper
NEW! AI matching with writer

This essay will therefore discuss critically domestic violence and how the Domestic Violence Act is not sufficient to protect women in South Africa from violence at the hands of their abusers To begin with, South African government refers domestic violence to any incident of threatening behaviour, violence or abuse (psychological, physical, sexual, financial or emotional) between adults who are or have been intimate partners or family members, regardless of gender or sexuality; and in the (South Africa) constitution enacted is an Act which aims “to provide for the issuing of protection orders with regard to domestic violence; and for matters connected therewith” which is the Domestic Violence Act, 1998 (Act No.

There are several good points about this Act, and primary to those is that people (especially women and children) to some extent are protected from the deliberate abuse at home. However, many are the shortcomings of this Act. For instance, the exact statistics concerning domestic violence are extremely difficult to obtain hence it becomes difficult to know how much the Act is working.

There are many actions that constitute domestic violence that are not defined as crimes, such as forced isolation, verbal abuse, stalking and economic abuse. Domestic violence is often not just a one-off event, but a series of events, or a continuous pattern of abuse. Domestic violence may also exist as a continuum with one serious violent incident at one end, to ongoing and multiple abuses at the other. This pattern of abuse is not recognized in South African criminal law, which tends to isolate individual incidents. In addition, as outlined by Bollen et.al (1999).most crimes of domestic violence are not reported to the police for fear of intimation, shame, and fear of not being believed, self-blame, or fear of retaliation.

Furthermore, it appears from studies and work by organizations offering support to victims that the incidence of domestic violence is very high in South Africa. Community based studies have revealed that in some areas almost a quarter of women report having being abused in their life times by a current or ex-partner, and that up to a half are affected by emotional or financial (Jewkes et.al, 1999). A survey of 269 women who had contacted helping agencies in three major cities found emotional or physical abuse to be the most prevalent form of domestic violence experienced by women, with 90 percent of the sample having experienced this abuse (Bollen et al, 1999). The Domestic Violence Act (Act 116) was introduced in 1998 with the aim of affording women protection from domestic violence by creating obligations on law enforcement bodies to protect women (victims) as far as is possible.

The Act sets out a broad range of behaviours that constitute domestic violence; including physical, sexual, verbal, emotional and psychological abuse, stalking, intimidation, harassment, malicious damage to property, unauthorized access to the complainant’s property, as well as other forms of controlling behaviour which may cause harm to the safety, health or wellbeing of the complainant. The Act also extends the notion of ‘domestic relationship’, affording to protection to married couples; same-sex relationships; couples who are (or were) in a dating, engagement or customary relationship, including an actual or perceived relationship; any person in an intimate relationship; parents of a child; and people who do or have recently shared a residence.

The Domestic Violence Act allows a complainant to apply to court for a protection order asking for relief or protection. An interim order may be granted, and after an enquiry, a final order may be granted against a respondent. The protection order may prohibit the respondent from committing any act of domestic violence; from entering a specified place; or from committing an act set out in the order. A warrant of arrest is issued simultaneously with the order, and brought into effect if the complainant reports that the respondent has breached any provision of the order. If he or she is found guilty of a contravention, then the court may convict the respondent and sentence him or her to a fine or a term of imprisonment. In terms of the Act, no prosecutor is permitted to refuse to institute an action, or to withdraw a charge unless authorized by the Director of public prosecution (Dissel & Ngubeni, 2003).

Another of the other very serious shortcoming of this Act is that, while the Act criminalizes the breach of an order, it does not create an offence of domestic violence (Dissel & Ngubeni). Where the offender commits an act that is recognized by the criminal law as a criminal offence, a woman can report the case to the police, and it may proceed to a criminal trial but if it is not recognized, then there is nothing to be done. In conclusion, the Act is an indication of the seriousness with which domestic violence is now viewed in South Africa. It offers one form of protection to women who are the victims of domestic violence, but it does not necessarily offer remedies to the problem. The essay has outlined that sometimes the reason why domestic violence is so prevalent is due to the fear of shame and not being believed. The recommendation therefore is that there should be trained personnel who understand clearly the domestic violence issue, persons who understand of such related issues and that will enable the victims to talk freely so as to reveal everything.

Domestic Violence Is one of the Many Social Issues. (2016, Apr 18). Retrieved from https://studymoose.com/domestic-violence-is-one-of-the-many-social-issues-essay 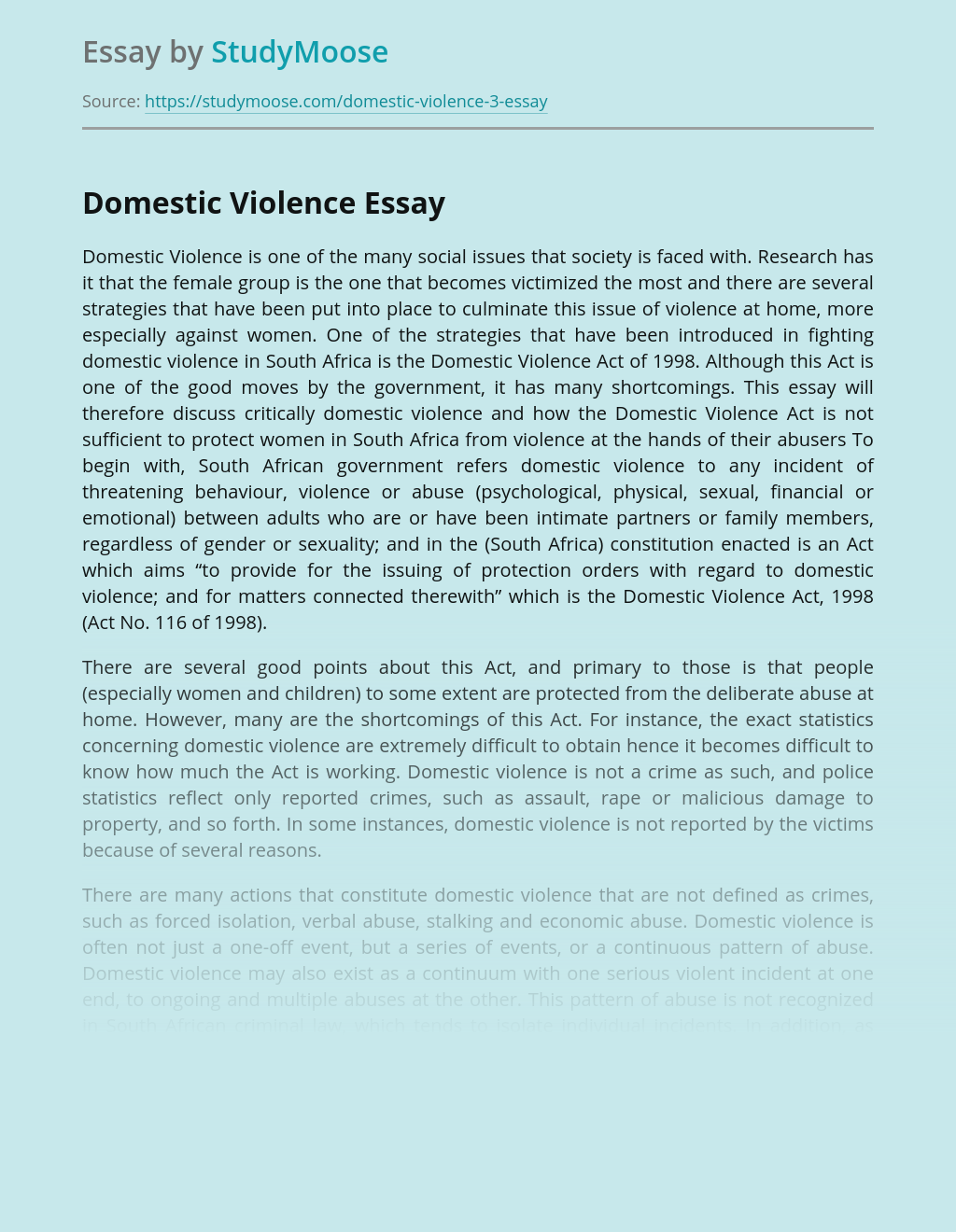 Turn in your highest-quality paper
Get a qualified writer to help you with
“ Domestic Violence Is one of the Many Social Issues ”
Get high-quality paper
Helping students since 2015
Stay Safe, Stay Original