Effects of Domestic Violence on Children

Don't use plagiarized sources.
Get Your Custom Essay on Effects of Domestic Violence on Children Just from $13,9/Page

A majority of studies reveal there are adult and child victims in 30 to 60 percent of families experiencing domestic violence (Appel and Holden, 1998; Edleson, 1999; Jaffe and Wolfe, 1990).

They may be hurt when household items are thrown or weapons are used. Infants may be injured if being held by the mother when the batterer strikes out; also, many children in homes where domestic violence occurs have difficulties in school, including problems with concentration, poor academic performance, difficulty with peer interactions, and more absences from school.

More so, children may become withdrawn, non-verbal, and exhibit regressed behaviors such as clinging and whining. Eating and sleeping difficulty, concentration problems, generalized anxiety, and physical complaints (such as headaches) are all common. Finally, through violence in the home, children may suffer emotional and psychological damage. The very young may show physical signs of distress such as bedwetting, stomach-aches and disturbed sleep. Older children can become withdrawn or exhibit extreme behaviour, such as misusing alcohol or drugs.

The research seeks to know if there is a direct impact on children’s well-being as a result of domestic violence from their parents, guardians and other family relatives. Specific objectives • To know the behavioral, social, and emotional problems faced by children who find themselves in homes were domestic violence is recurrent. • to know the value parents attach to the psychological well-being of their children • To examine platforms to sensitize and educate parents and guardians on the need to avoid acts of domestic violence in the presence of their children.

Parents are the most important social agents on children’s upbringing, care and control. They are directly involved with their well-being as well as the sound state of mind at all times. Domestic violence therefore affects children. All children are affected emotionally by witnessing violence. Children who witness regular acts of domestic violence have greater emotional and behavioral problems than other children. Some of the immediate effects may include nightmares, anxiety, withdrawal and bedwetting. (Aron, L. Y. and Olson, K. K. 1997)

Believe the historical inequality of women and gender socialization of females and males contribute to the root causes of domestic violence. Until the 1970’s, women who were raped or suffered violence in their homes had no formal place to go for help or support. Shelters and services for victims of domestic violence did not exist and there was little, if any, response from criminal or civil courts, law enforcement, hospitals, and social service agencies. Society and its formal institutions viewed domestic violence as a “private matter.”

In Cameroon it is estimated that more than three women a day are murdered by their husbands or boyfriends and women experience two million injuries from intimate partner violence each year. Many of these women are mothers who often go to great and courageous lengths to protect their children from abusive partners. In fact, research has shown that the non-abusing parent is often the strongest protective factor in the lives of children who are exposed to domestic violence. However, growing up in a violent home may be a terrifying and traumatic experience that can affect every aspect of a child’s life, growth and development. In spite of this, we know that when properly identified and addressed, the effects of domestic violence on children can be mitigated. (Henriette Ekwe Ebongo 2011)

Studies have shown that more than 700 children live in families in which partner violence occurred at least once in the past year, and 500 children live in families in which severe partner violence occurred. It is also estimated that; for every hour, as many as 115 children are abused, 90% of children from violent homes witness their fathers beating their mothers, 63% of all boys, age 11-20, who commit murder, kill the man who was abusing their mother, Daughters of abused women are six times more likely to be sexually abused as girls from non-abusive families, Child victims of severe violence have two to four times higher rates of trouble-making friends, temper tantrums, failing grades in school, having problems in school and at home and finally, Children in homes where violence occurs are physically abused or neglected at. a rate 1500%

Children’s risk levels and reactions to domestic violence exist on a continuum where some children demonstrate enormous resiliency while others show signs of significant maladaptive adjustment (Carlson, 2000; Edleson, 1999; Hughes, Graham-Bermann & Gruber, 2001). Protective factors, such as social competence, intelligence, high self-esteem, outgoing temperament, strong sibling and peer relationships, and a supportive relationship with an adult, can help protect children from the adverse affects of exposure to domestic violence.

Many theories have existed over time to attempt to grasp the reasons for domestic violence in human society. This analysis of violence ranges from the macro level (wars, government, repression, etc) to acts between the couple and the individual. Such efforts to define violence, particularly partner violence which integrates complex interrelations of gender and sexuality need to be investigated within the context of their respective societies. Here are two examples of theories that have been used to explain the effects of domestic violence.

1. Feminist Theory There are many different ideas within feminist theory of domestic violence, but in Feminist Perspectives on Wife Abuse they have identified four common strains. These are:- 1 that as the dominant class, men have differential access to material and symbolic resources and women are devalued as secondary and inferior 2 intimate partner abuse is a predictable and common dimension of normal family life 3 women’s experiences are often defined as inferior because male domination influences all aspects of life 4 the feminist perspective is dedicated to advocacy for women.

2. Traumatic Bonding Theory: This theory seeks to explain why women remain with men who beat them. Two features have been recognized: the existence of a power imbalance within the relationship, so that the batterer perceives him or herself as dominating the other, and the intermittent nature of the abuse. This theory postulates that as these power relationships polarize over time, the powerless individual in the relationship becomes increasingly dependent on the dominator. In addition, moments in between abuse are times when positive displays of love and affection cement the legitimacy of the relationship.

Effects of Domestic Violence on Children. (2016, Nov 11). Retrieved from https://studymoose.com/effects-of-domestic-violence-on-children-essay 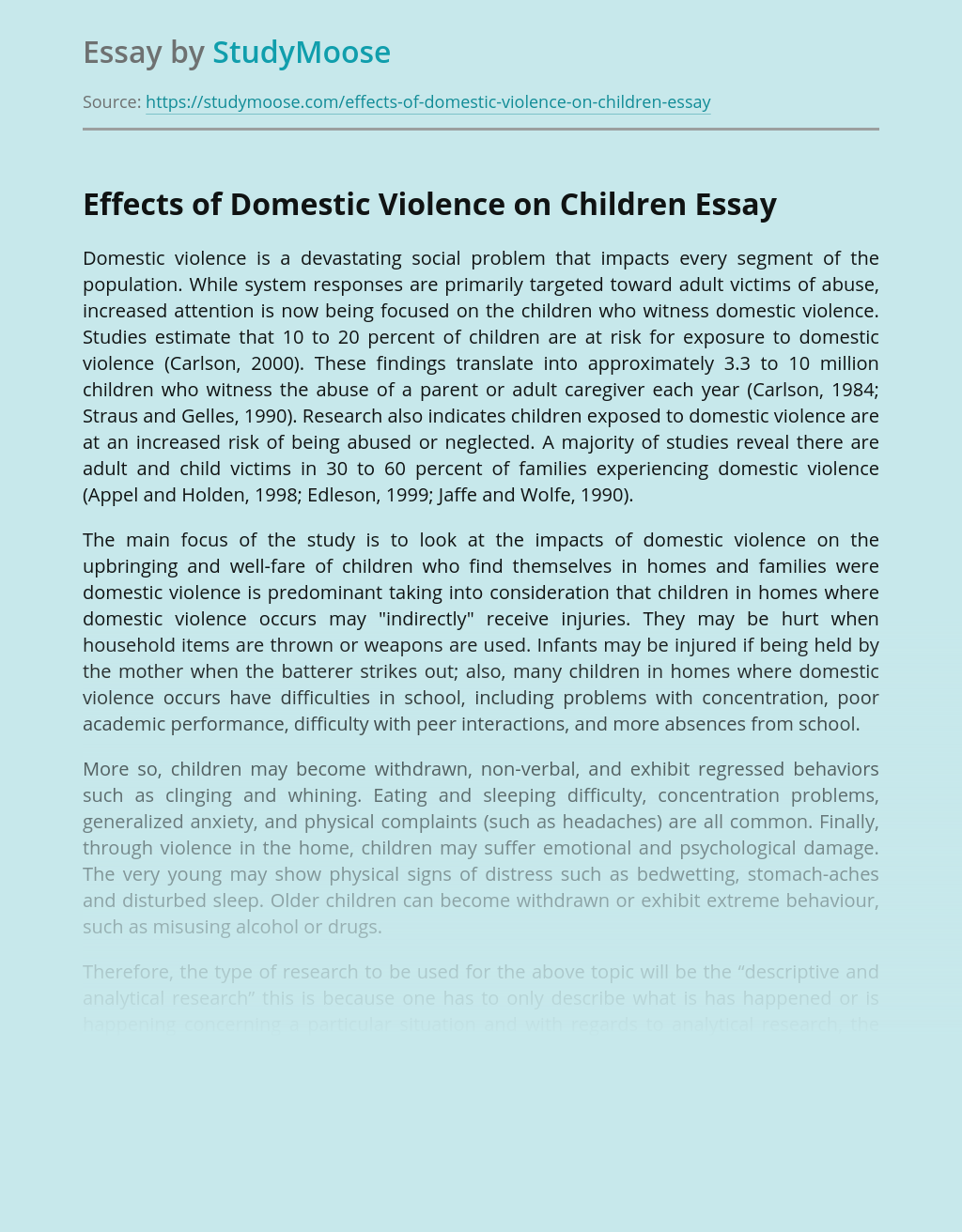 Families Play an Important Role in the Future of a Child

Susan Lieberman, a Ph.D. psychologist, once said, “Family traditions counter alienation and confusion. They help us define who we are; they provide something steady, reliable and safe in a confusing world.” It is true, that families indeed play an important role in the future of a child. Families nurture a child, and mould him or...

There are many influences which can affect a child’s development, personal factors include influences before and at birth, health status and disabilities, sensory impairments and learning difficulties. Genetics affect a child’s development at conception where the sperm and egg determine sex, height and eye colour. If the genetics are faulty this can affect the child’s...

According to the definition of the UNICEF, a street child is someone from whom the street has become his or her home and source of living; and who isn’t protected by responsible adults. Thus, the term “street children” refers to children who work and live on their own on the street. Because it is difficult...

View sample
The different areas of learning and development