Domestic violence is the leading cause of injury to women—more than car accidents, muggings, and rapes combined. The CDC reports that 15 million children are abused every year. Recently, the NFL has been under a lot of scrutiny for their domestic violence policy. There are as many opinions as there are teams on how they should react. To me, that is the problem. See, reaction means to have an action performed in response to a situation. However, action stands for the fact or process of doing something, typically to achieve an aim.

Turn in your highest-quality paper
Get a qualified writer to help you with
“ Domestic Violence Speech ”
Get high-quality paper
NEW! AI matching with writer

The NFL, NBA, MLB and all other pro sport leagues need to band together and set the example. Say they will no longer tolerate violence against women. After all, pro athletes are role models for our youth. How they behave on and off the field can make a difference. However, domestic violence is much bigger than pro sports. We just seem to talk about it more when a pro athlete is involved.

Over 70% of domestic violence murders happen after the victim as ended the relationship, after she has gotten out. Because then the abuser has nothing left to lose. Other outcomes include long term stalking, even after the abuser remarries. Denial of financial resources, and manipulation of the family court systems to terrify the victim and her children, who are regularly forced by family court judges to spend unsupervised time with the man who beat their mother.

And still we ask, why doesn’t she just leave? We tend to stereotype victims as self-destructive women, or damaged goods. The question, why does she stay is code for some people for, it’s her fault for staying. As if victims intentionally chose to fall in love with men who are intent on destroying them. Maybe the better question is “why does the abuser do it?” rather than “why does she stay?” Instead of blaming the victim of the abuse, let’s turn our attention towards the person who is causing the harm. As a society, we can no longer stand by and let these victims continue the cycle. We have to find a way to break it. I would love to say it starts at home, but that is where the abuse is, so the schools have to take a larger role in this problem. We teach our children math, reading and science, but how about relationship skills.

Our schools need to help educate our children that violence will not be tolerated. If we want to attack this problem, we need to teach how to be respectful in relationships. We need to do more to decrease the abuse that happens not just the physical abuse, but all abuse. Maybe you are thinking, wow this is fascinating, but this whole time I have been talking to you about it there have been 24 victims a minute beaten. A woman or child has died. I promise you, there are several of you listening to me right now who are currently being abused or know someone who is being abused, or maybe were abused as children, or are the abusers. Abuse could be affecting your sister, cousin, or friend right now. So what are you going to do? 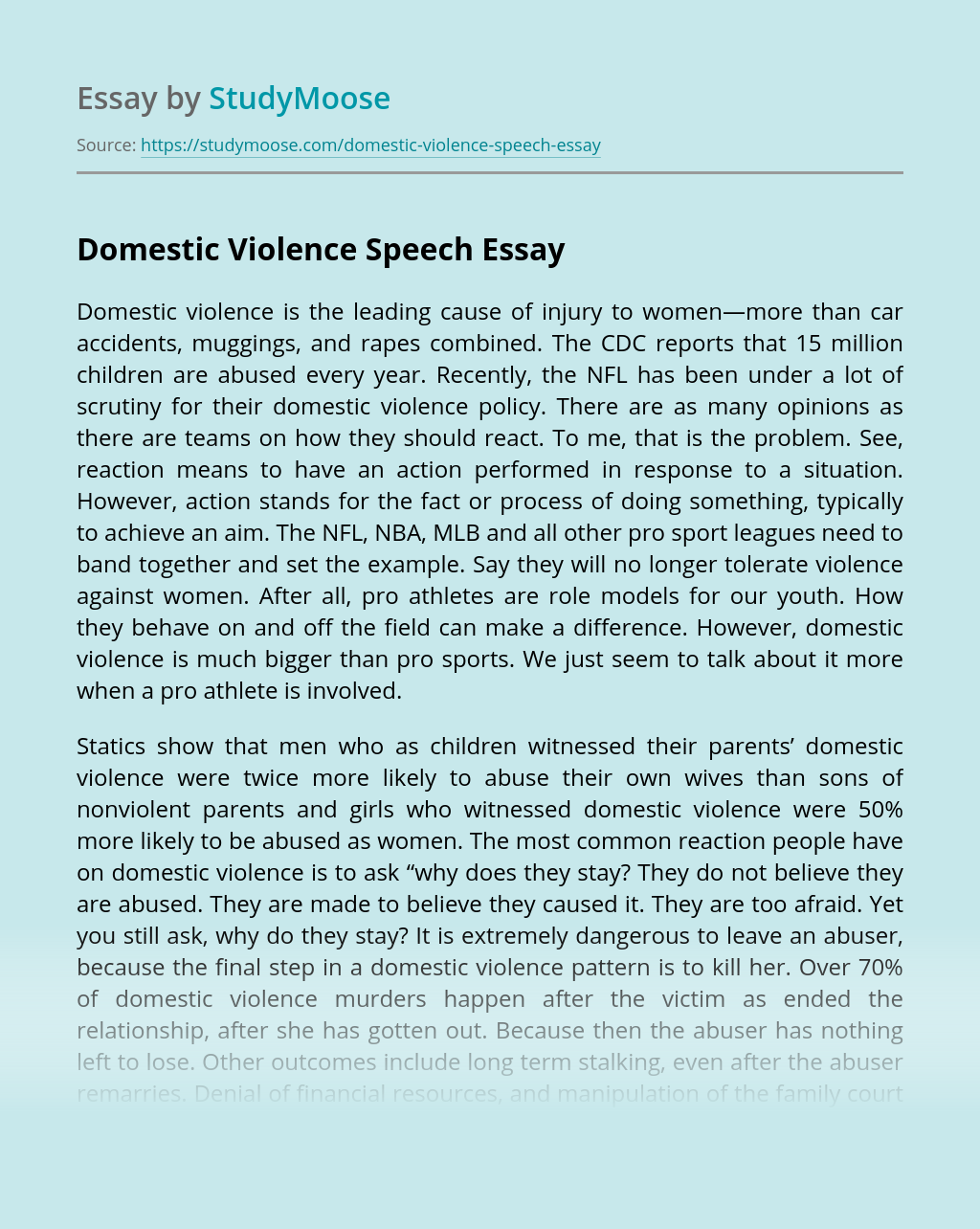 Turn in your highest-quality paper
Get a qualified writer to help you with
“ Domestic Violence Speech ”
Get high-quality paper
Helping students since 2015
Stay Safe, Stay Original