I. Attention Getter: Do you play violent video games? If the answer is yes, then you must be a mass murderer.

II. Central Idea: According to the survey you all filled out, a few people are of the opinion that video games can cause violence in those who play them, which is why I’m here to try and dissuade those of that opinion. III. Credibility: Because I am a gamer myself and have come into contact with these ideas about violence, I have done much research on the topic and feel I have the credibility to speak to you today.

IV. Reason to Listen: What I will be telling you today will help further your knowledge on the topic and give you a more in-depth view you can use when teaching your children in the future. V. Preview: Overall, I will be going over the maturity and correlations involved in violent video games, and the ideas needed to have understanding.

Connective: (First, I will be discussing the level of maturity that is needed to play violent video games.)

I.The responsibility of making sure violent video games goes into the hands of children who can handle it lies with the parents or guardians of that child. A. The rating scale for video games should be more heavily regulated and should have more emphasis placed on it, as many young children are getting their hands on mature games without parental knowledge . Despite this, It’s still the parent or guardian’s responsibility to pay attention to what your child is watching or playing if the parent or guardian finds the regulation of that sort of material to be important.

Alike to how movies are regulated, we need to do the same for video games. Connective: (But games aren’t always causing conflict when they have violent tendencies.) II. Contrary to popular belief, video games can have many positive effects for a lot of people. A.Like sports, many use video games to work off energy and frustration they have built up throughout the day.

This is actually very beneficial, and can sometimes decrease violence, as the violent acts those individuals might have committed were channeled into a video game. B. Also, most video games punish the players for intentionally cruel acts, which serves as a moral compass and can often reinforce positive morality. For example, the popular video game Infamous 2, has a karma based moral compass and decision making, where if you choose to go down the wrong path, destruction and madness will follow. On the other hand, if you do good deeds, you become the hero and great things happen to your character. This teaches those who play the game that the more violent paths have negative tendencies, so they aren’t likely to do those actions in real life based from that. Connective: (After seeing the positive side to violence in video games, we can now further push out the negative side.)

(Video) 0:00-1:01 and 3:07-4:00
III. According to howstuffworks.com, corellation does not equal causation.There is also no meaningful correlation between playing violent video games and juvenile crime.
A.If one believes that violence in video games lead to more juvenile crime, then you would expect that juvenile violent crime would increase with the increase in video game sales. Despite that, there have never been any findings that prove a correlation between video games sales and juvenile crime, though there has been evidence to to contrary. For example, according to itph.org, while video game sales from 1999 to 2008 have increased to five times the previous amount, juvenile crime rates have actually dropped nearly 40%.

Conclusion
I. Overall, I have showed you how video games are only sometimes hazardous to those not yet mature and how this problem can be fixed simply with better parental guidance. I have also showed you that video games overall do not cause violence and that it is simply sometimes a small meaningless correlation. II. I hope this has changed some of your views and can help you to parent your children well. 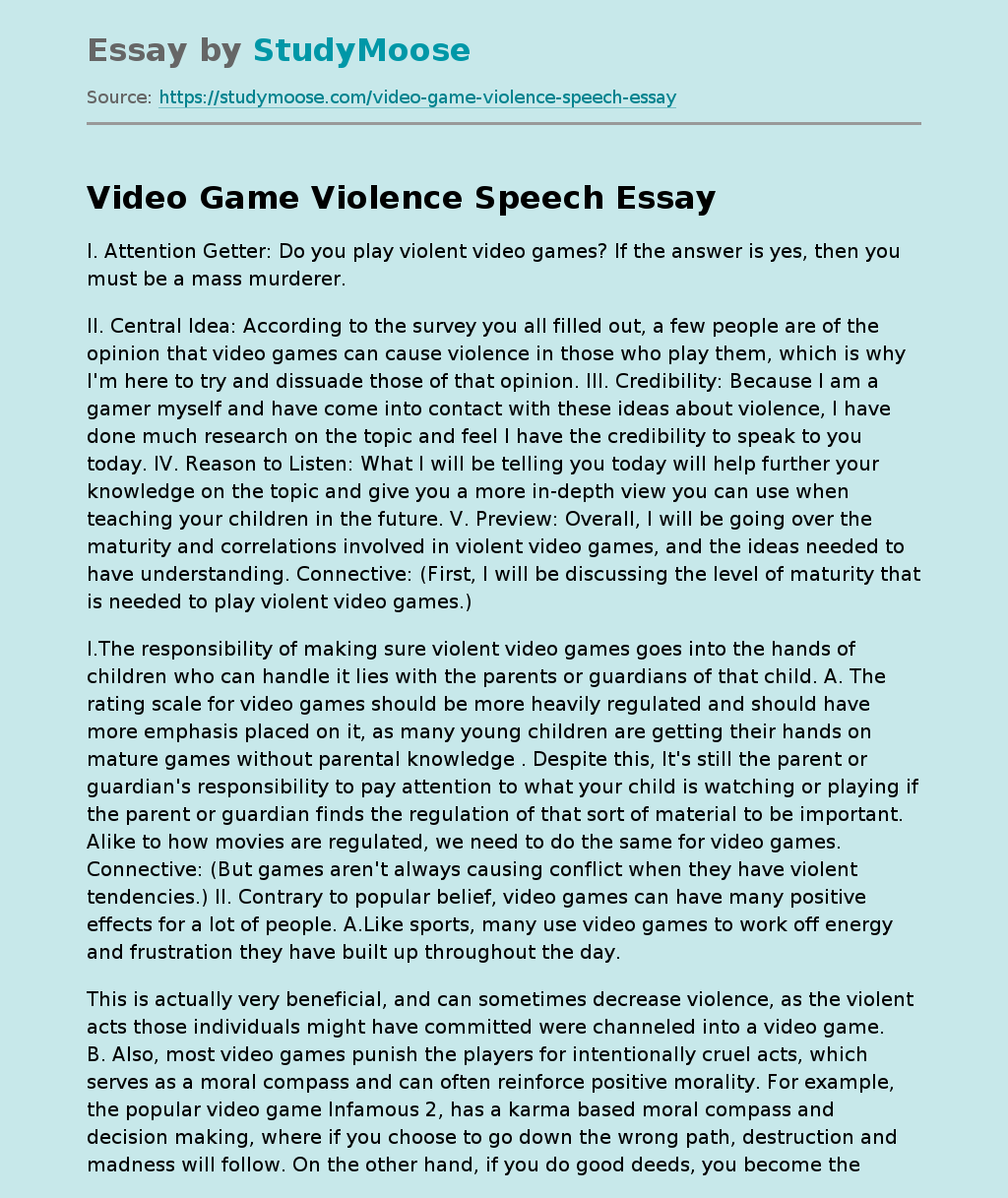