Does Age Matter in Relationships

When it comes to relationship, age really should not matter it should be up to the two people only. What is basically being said is age doesn’t have no bearing here in a relationship unless you choose to make it one. It seems that is a perfectly great argument, there are plenty of people that think people who are years apart cannot have a relationship that will last. I believe it really does all depend on the two people who are having a relationship, as it is there life and the way they get a long that will ultimately make their union succeed or fail.

Don't use plagiarized sources. Get your custom essay on
“ Does Age Matter in Relationships ”
Get custom paper
NEW! smart matching with writer

Age differences in relationships are a funny thing as time passes by it becomes less important. A ten year age difference does not seem it is a big deal when you are fifty and the other is forty. If you roll the ages back to twenty eight and eighteen, then people begin to questioning the relationship.

There are those that see the two age pairings and question what the twenty eight was up. Some people would look at the older of two and have the feeling if they were taking advantage of the younger person.

The fact is that we all should not judge a relationship that is based on the ages of the two people involved in it. Because we do not think we could relate to someone that is younger does not mean that the other person cannot. It is also foolish to believe that someone who is younger is old enough to be involved with someone who is older than them.

Some twenty year olds have their heads on better than twice their age, and some people still feel that they are not old enough to know what they are getting into.

You think by now we would become insensitive to relationships that are big age gaps, since we see them daily on TV and the movies and in public all the time. It almost the norm that you see an older man with a younger women. Some people say that the man is way out of his league. This should be insensitive to us all, but it seems to add fuel to the fire for those that see this sort of age difference as something very wrong (abomination).

It does not help us when we see on films spill over into our lives. There have been numerous instances where younger people fall in love with someone that is older than they. When these folks fall in love they are questioned why they fell in love does the older have millions in the bank or is they on their last legs. It does not help the cause when people believe that love cannot ignite regardless of their age, but that is like all marriages are sham and they do not love because so many end in divorce.

There are a lot of couples out there who are far apart in years, but somehow they are meant to be together. We seldom hear about the good relationships we only hear about the bad ones because the spotlight is shone on them only. We really should mind our own business and stop poking our noses in and passing judgment on relationships that have a big age difference. We truly do not know anything about what is going on in these people minds and what their true feeling are for each other. At the end of the day all that matters is how they feel.

Does Age Matter in Relationships. (2016, Dec 15). Retrieved from https://studymoose.com/does-age-matter-in-relationships-essay 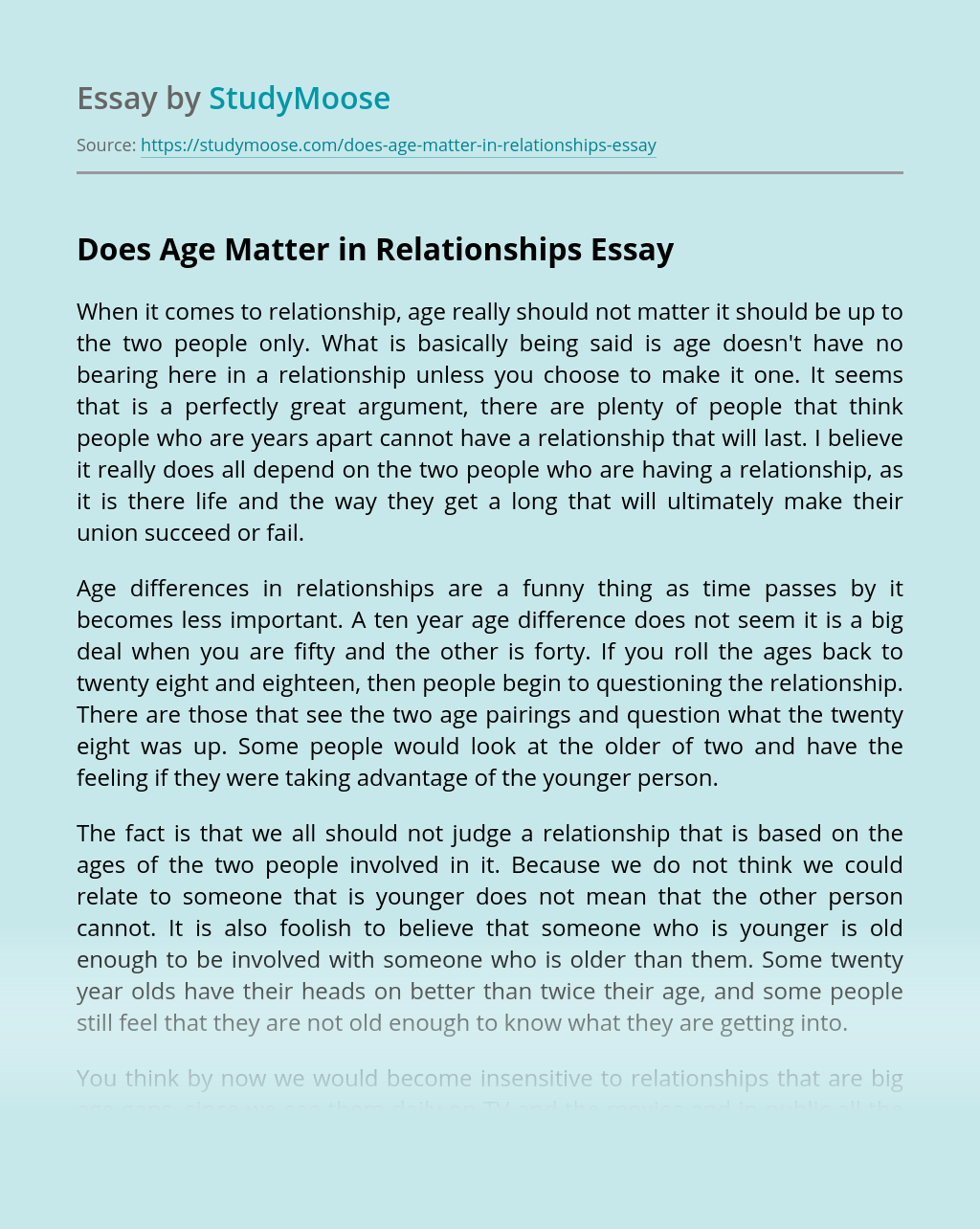