Nature Versus Nurture: What Does Matter More?

Nature or Nurture? This long-running debate is one of the oldest issues within philosophy and psychology domains that still continues to be an ongoing subject of controversy. What determines our behavior more – our genetic makeup or the environment around us? Can the human be a product of genome? Contemporary biological psychology believes that it is a genetic code that shapes our personality and nativist theory supporters believe character traits are purely influenced by nature. Behaviorists, on the other hand, claim that it is the environment what makes us who we are, taking into consideration our childhood experience, upbringing, and cultural surroundings.

Don't use plagiarized sources. Get your custom essay on
“ Nature Versus Nurture: What Does Matter More? ”
Get custom paper
NEW! smart matching with writer

In the past, nature versus nurture approach was biased. One side claimed that personality differences are down to nature and the other argued that human behavior is determined by culture and nurture, rather than genetics. Today, most scientists suppose that humans are conditioned by both, genetic predisposition and influences from outside, moreover, nature and nurture are working and interacting together in vital ways playing a huge role determining who we eventually become.

Let’s consider the leading theories dealing with this issue.

“Our genes made us. We, animals, exist for their preservation and are nothing more than their throwaway survival machines.” This quote is from Richard Dawkins’ international bestseller book, “The Selfish Gene,” where famous evolutionary biologist argues that genes completely determine our biological makeup including our personality, behavior, and outlook. This approach denies the change of predispositions under environmental influence.

One more example of theory supporting biological predisposition within psychology is an idea of a language acquisition device proposed by Noam Chomsky.

The theory asserts that every human is born with an innate ability for acquiring language already. This innate ability is a language acquisition device. Language acquisition device or LAD for short can be explained as a hypothetical tool in a brain that helps children learn and understand language. In other words, we are born with a significant innate knowledge of grammar embedded in our genes.

What do the supporters of nurture theory think? These well-known theorists take the position that it is a nurture what shapes us as intelligent human beings and it has nothing to do with our physical aspects. For instance, John Locke believed that human’s mind begins as a blank slate and everything that influences your life eventually shapes who you are. Behaviorism is also a vivid example of nurture theory. Behavior theorists define learning as a process genuinely influenced by environment and empiricists assert that all or most behavior and character traits result from learning.

Another approach explaining nurture impact is an attachment theory. Attachment theory is a widely-accepted assumption of human development, formulated by John Bowlby, the main tenet of which is that in order to develop emotionally little baby needs to be securely attached to a parent or a caregiver. According to this belief, it’s not enough to simply have a genetic predisposition for a healthy functioning or cognitive development, in fact, relationships are as essential as air, food or water for a baby’s social and emotional growth. By becoming older, the child needs to attain independence. The caregiver allows him to move away when he feels able, and return whenever he needs to be protected and comforted. Attachment theorists maintain that an adult’s capacity to form healthy relationships is a result of having had at least one secure attachment as a baby, however, it is possible to compensate for the lack of secure attachments by developing positive relationships in later life.

And what about today? Nowadays, most of the scientists maintain that human being is a product of both, genetic makeup and environment. The interaction between heredity and community is an exact combination of factors influencing human development. For example, a pitch gene described by Kevin Davies. Perfect pitch is an innate ability to recognize the pitch of a musical tone without any reference. It must be in the genes. However, scientists also found out that even those owning the gene couldn’t develop the skill without musical training during early childhood. Thus, for any gene to manifest itself, there should be appropriate environment fostering that particular gene.

Height is a clear illustration of nature and nurture interaction. A child may come from a family where everyone is tall and even inherit that gene, however, he can look nothing like his father because of bad habits or being brought up in poor environmental conditions where he does not receive an appropriate nutrition.

To shed some light on nature and nurture combination scientists have studied the impact of genetics and environmental factors on psychological illnesses. The results were quite surprising. Schizophrenia, for example, has the genetic basis. In fact, this mental disease can also be triggered by environmental factors (like internal or external stress) and the latest investigation shows that human is not a victim of his genetic predisposition and can prevent psychological diseases by himself. The majority of people may have such “sleeping genes,” and these might never wake up if the environment and surroundings are favorable.

So, let’s draw a conclusion. Are our character features or physical traits determined by our genes? Are we conditioned by influences from outside? I strongly believe that our appearance such as body shape, hair structure or eye color is more genetically than environmentally determined. On the other hand, it can be influenced by the external factors as well. Some particular inborn features like language acquisition device should be put down to nature. Acquiring language as a baby is definitely an innate ability rather than the factor conditioned by the environment around us. It’s no longer a debate whether nature or nurture shapes our development and behavior. It is the combination of these two vital aspects that defines us who we are and who we eventually become.

Nature Versus Nurture: What Does Matter More?. (2017, Jul 10). Retrieved from https://studymoose.com/nature-versus-nurture-matter-essay 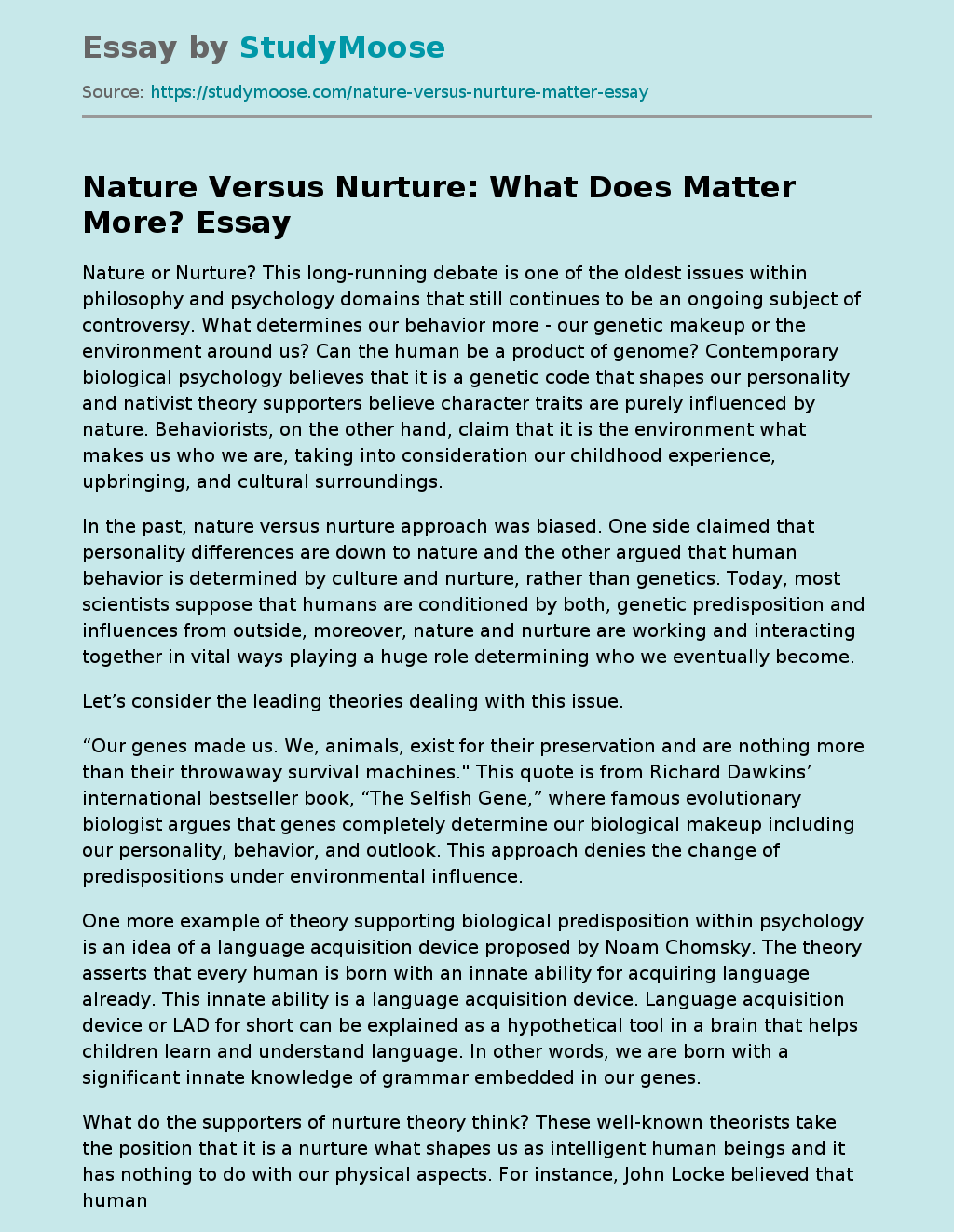