Discuss the role of the fool in "King Lear"

In ‘King Lear’, the Fool is a character of dramatic importance in the play. The Fool helps the reader, and in Shakespeare’s time would help the audience, to understand what lies beneath the surface of certain actions or verses. He equally strives to make Lear ‘see’. The Fool may be a very intriguing character and very often a complicated one but his role is necessary in ‘King Lear’.

The Fool plays three major roles; one of these roles is that of an ‘inner-conscience’ of Lear.

Don't use plagiarized sources.
Get Your Custom Essay on Discuss the role of the fool in “King Lear” Just from $13,9/Page

The Fool provides basic wisdom and reasoning for the King at much needed times. The Fool also works as amusement for Lear in times of sadness; often making Lear laugh at himself! He is one of the only people besides the Duke of Kent and Cordelia who are willing to stand up to the King.

Right from the very first appearance we realize that he is a very ironic character and that he makes fun of Kent as well as of the situation.

With his sarcastic remarks and phrases he is simply telling Kent, “..thou must needs wear my coxcomb,” telling him that he is a Fool for; “…taking one’s part that’s out of favour,” because Lear has given everything away and is not worth following.

The role of he Fool is to help Lear “…see better…”, making him aware of what his daughters really are and trying to make him understand how wrong his deed of giving them everything was. He acts like Lear’s ‘inner-conscience’ and does this in the best of ways by being a “…bitter fool…” because the truth hurts; “Thou hadst little wit in thy bald crown when thou gav’st thy golden one away”. (Act 1 Scene 4) He is straight forward and direct, “…I had rather be any kind o’thing than a fool, and yet I would not be thee, nuncle.” (Act 1 Scene 4)

The Fool is surely the wisest of the two, “Thou shouldst not have been old till thou hadst been wise,” but in his own way he is a fool too, for standing by Lear through this because Lear is, “…an O without a figure…” he is, “…nothing…”. The directness of his words also foretells what is to happen to Lear. He is always trying to make him see things the way they are in an extremely wise way, “…but for all this thou shalt have as many dolours for thy daughters…” (Act 2 Scene 4) The Fool heightens the image of “nothing” in ‘King Lear’, taunting the King himself with his hurtful words; this is the wise-ness of the Fool

The Fool and Lear share a close relationship in the play, contrary to the many relationships that turn sour. The Fool stays loyal to Lear even through his madness. In Act 3 Scene 2 the Fools role becomes one of a commentator in his soliloquy; he taunts Lear and prophesies on events that will unfold. From this point on the prominence of his role starts to lessen as Lear meets Poor Tom and now gives him most of his attention. He still sticks to his wise sarcasm and joins in Lear’s mock-trial along with Poor Tom in Act 3 Scene 6. This is the last time we see the Fool, were his exit very appropriately portrays the state of affairs of the play at this point “And I’ll go to bed at noon.” – insinuating that everything is upside down and in chaos.

After having read ‘King Lear’, one may notice that the Fool and Cordelia never participate in the same scene; therefore there have been suggestions that Cordelia may have been the Fool in disguise, but there has never been any concrete proof to prove this theory.

The name Fool means nothing. He is the most intelligent and insightful character in the play and provides simple and clear reasoning for a King with limited vision. The Fool is loyal to the bitter end and provides the little bits of humour, much needed in this play; he has honesty and integrity that is found in only a few other characters in this play.

Discuss the role of the fool in “King Lear”. (2016, Jun 28). Retrieved from https://studymoose.com/discuss-the-role-of-the-fool-in-king-lear-essay 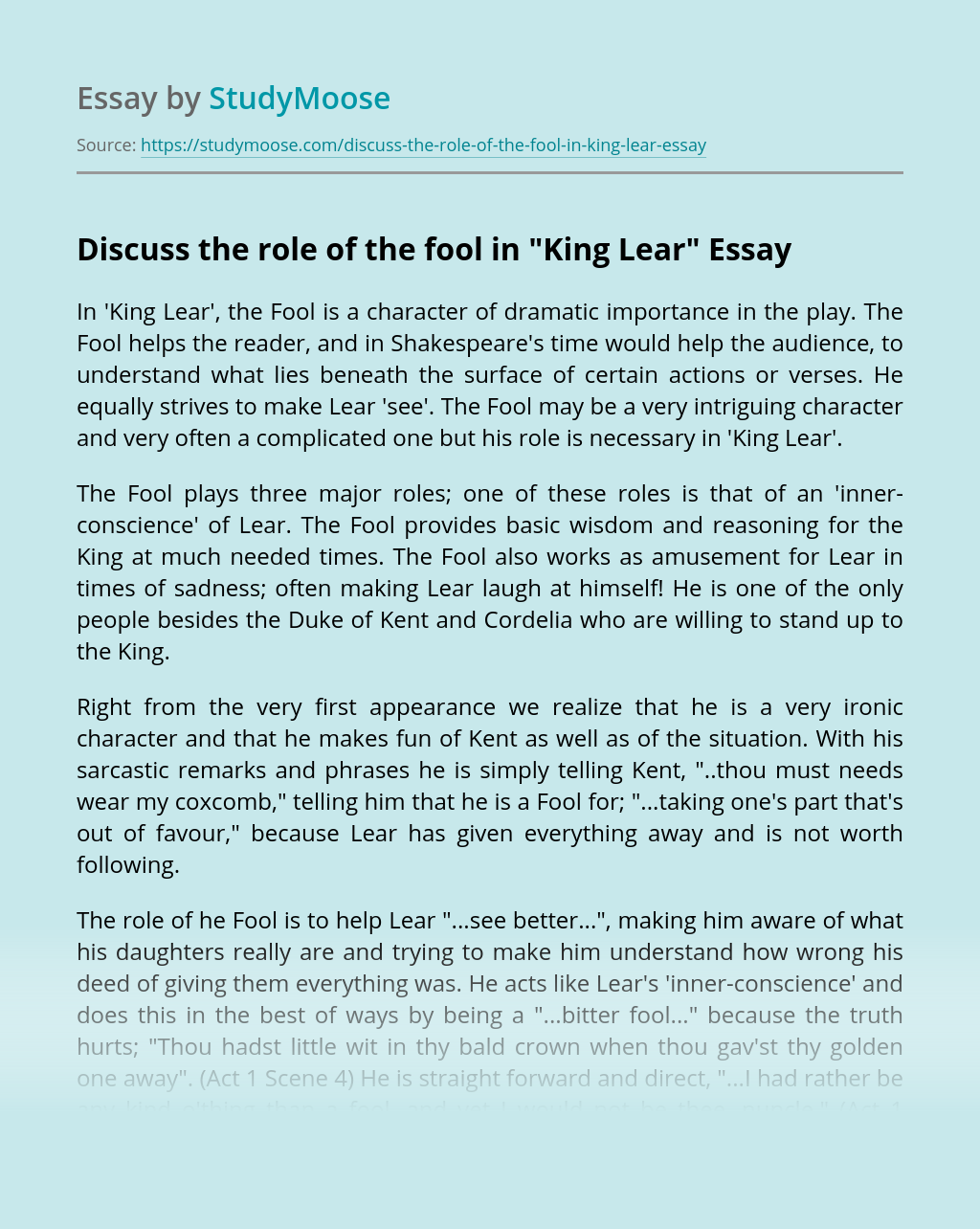 King Lear is a metaphorical tale of an ailing man’s journey through hell in order to forgive his sins. Lear’s untimely, sinful surrender of his throne results in a chain reaction of events that send him through a treacherous journey. It is a tale that graphically describes the consequences of one man’s foolish decisions; decisions...

Aristotle’s Poetics defines the nature of tragic drama, discusses the six essential elements of drama, states his opinion on the best type of tragic plot, and suggests the most effective means to arouse essential emotions such as pity and fear. He presents here the elaborate structure of justice of virtue rewarded and villain punished, broadly...

An interesting principle is the ways Shakespeare presents Edgar in the play “King Lear”. Edgar is the genuine child of Gloucester and his illegitimate sibling Edmund, wishes to take his dad’s land, so he says to his daddy that Edgar is preparing to eliminate him, and tells Edgar to get away. The function of Edgar...

The Importance of a Parent Child Bond in King Lear

The strongest, truest love is that a parent and child share. Unconditional and forever, it incorporates every division of love. Although, the bond between parent and child can be held together with great strength, either, can hold a persona or can disguise a certain aspect of their character. Seemingly, in _King Lear_ it is quite...

Women share center stage in the majority of the Shakespearen works. Many a plot by his pen include women in the primary themes. Sometimes the plot is revolved exclusively around them causing a catastrophe. In King Lear, Cordelia is the source of all troubles which lastly leads to her own distruction along with her father...