Everyone has morals. The usual ones are: Don’t lie, cheat, or steal. The swipe in “I’m a fool” by Sherwood Anderson does not seem to possess these morals throughout the story, although he does seem to feel remorseful at the end of the story. He lies, cheats, and steals, though not in a way most consider normal.

In “I’m a fool” the swipe lies. He lies about who he is, where he is from, and what he does.

Don't use plagiarized sources. Get your custom essay on
“ “I’m a Fool” by S. Anderson ”
Get custom paper
NEW! smart matching with writer

He tells Miss Elinor Woodbury, Mr. Wilbur Wessen, and Miss Lucy Wessen that he was “Walter Mathers for Marietta, Ohio,” and that his “father owned the horse About Ben Ahem,” and that his father “had let him out to this Bob French for racing purposes, because our family was proud and had never gone into racing that way, in our own way, I mean, and Miss Lucy Wessen’s eyes were shining.” He then went on to tell her about his “place” down in Marietta, and “about the big stables and the grand big house,” He had on the hill above the Ohio River.

He justifies this by saying that he knew enough not to brag and to make it seem like they were pulling it out of him instead of him telling them.

He cheats by using his lie that he is Walter Mathers, son of the owner of About Ben Ahem. He tells them that About Ben Ahem “would lose the first heat by pacing like a lame cow and then he would come back and skin ’em alive after that,” like he had seen it happen before.

The swipe backs this up by having Mr. Wilbur Wessen place thirty dollars of his (the swipe’s) money on About Ben Ahem for the best odds that he could get after the first heat.

The swipe is a thief because he stills another mans identity. “There ain’t any Walter Mathers, like I said to her and them, and there hasn’t ever been one, but if there was, I bet I’d go down to Marietta, Ohio, and shoot him tomorrow.” This constitutes a murderous attitude just to cover for himself.

At the end of the story the swipe doesn’t tell Miss Lucy, Mr. Wilbur, or Miss Woodbury that he isn’t who he says he is, he doesn’t come clean with how he knew About Ben Ahem would win, or where he is from, even after Miss Lucy says that she would write to him because “She whispered and said it was like she and I could get out of the boat and walk on water.” So even though the swipe is remorseful at the end of the story and says “I’ll quit working an be a bum and give him my job. I don’t care nothing for working, and earning money, and saving it for no such fool as myself,” he is still a liar, a cheat, and a thief. 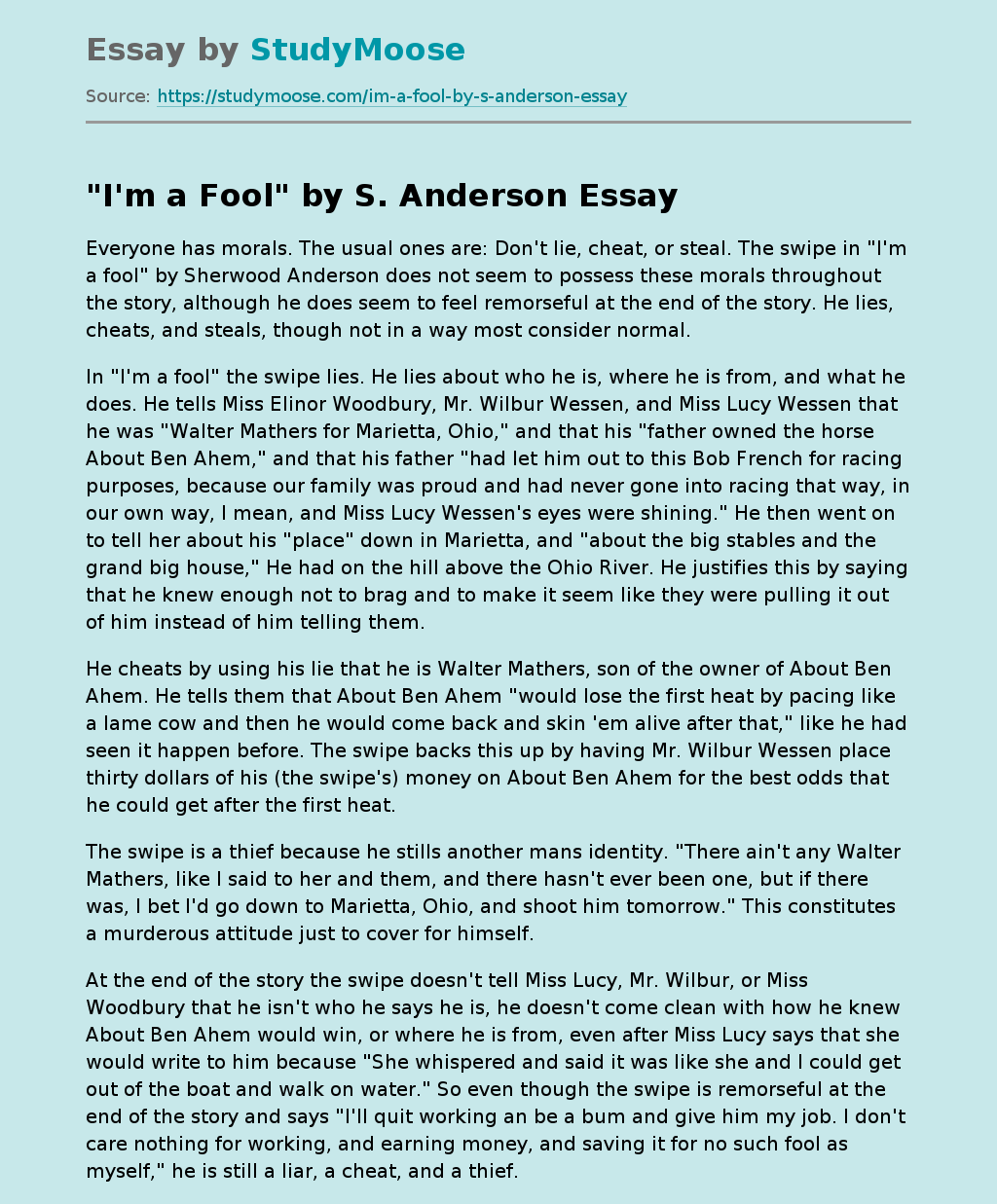