In the early 1930’s, war was forming in Europe. Totalitarian dictators were strongly influencing their countries, and those around them. The most prominent dictators consisted of Benito Mussolini of Italy, Josef Stalin of Russia, and Adolf Hitler of Germany. The United States didn’t want to get sucked into another war that wasn’t their problem, so they proclaimed neutrality with the Neutrality Acts of 1935, 1936, 1937, and later 1939. On December 7, 1941, Pearl Harbor, Hawaii was attacked by Japan, and a few days later, the United States entered World War II.

Don't use plagiarized sources.
Get Your Custom Essay on Discrimination during World War II Just from $13,9/Page

The United States had to make a national effort to provide for the Allies now fighting in Europe.

Despite the national effort to do better for the country, discrimination towards certain racial groups existed. Patriotism is the love of and devotion to one’s country, and patriotism was definitely prominent while entering the war, because the United States was defending itself and rebelling against the communism within the world. The statement saying that discrimination continued during World War II despite the groups of American patriots is true.

Despite patriotic efforts during the war, Mexican-Americans were victims of discrimination. Americans had to conserve the products that they regularly used, so the products could be shipped to those fighting in Europe. American economy greatly improved, and the war seemed to pull the United States out of the depression. Because of the national draft that plucked men and women from their homes and into the military, there weren’t enough workers to produce all of the materials that were greatly needed for those fighting.

So the Bracero Program was created, which brought Mexican workers to America to work. Such sudden “rubbing of the races” did spark riots and cause tension, such as the 1943 attack on some Mexican-American navy men in Los Angeles. The Mexicans were mostly used for agricultural jobs on the farm, gathering products to be shipped. They were respected enough to be relied upon to handle certain jobs. The Bracero Program was a patriotic effort to help out the country, but it showed minimal respect for those foreigners assisting America and it’s economy. The discrimination the braceros went through makes the statement true.

African-Americans were largely discriminated against during World War II, despite the attitude of patriotism in the United States. As more and more jobs were opening, a migration occurred from the rural areas to the cities. Over 1.6 million blacks left the South for better places, but explosive tensions developed over black housing, employment, and segregation facilities. African-Americans have always been discriminated against throughout history, as demonstrated through things like slavery, segregation, and the Jim Crow laws. Despite patriotic effort in the United States during the war, the negative attitude towards African-Americans still existed. A. Philip Randolph, leader of the Brotherhood of Sleeping Car Porters, threatened a “Negro March to Washington” in 1941 to get better rights and treatment.

The president also established the Fair Employment Practices Commission to discourage racism and oppression in the workplace, and while Blacks in the army still suffered degrading discrimination, such as separate blood banks, they still used the war as a rallying cry against dictators abroad and racism at home. In 1943 the Detroit race riot killed 25 blacks and 9 whites. All of these things were examples of how African-Americans suffered while there was a large amount of patriotism occurring in the United States. The Blacks came to the cities to help out and be patriotic in their efforts towards the war. They even fought in the war, but were often given non-combat, and non-respectable occupations. They were segregated into units of their own race as well. Despite their patriotic efforts, they were strongly discriminated against, making the statement true.

Japanese-Americans were largely discriminated against during World War II, despite the attitude of patriotism in the United States. After the attack at Pearl Harbor, millions of infuriated Americans instantly changed their views away from isolationism. National unity and patriotism were very strong as the few Hitler supporters in America faded away. Most of America’s ethnic groups assimilated even faster due to the war, since in the decades before the war, few immigrants had been allowed into America. Japanese-Americans became a target for discrimination in the United States because Japan’s attacks.

On the Pacific coast, 110,000 Japanese-Americans were taken from their homes and herded into relocation camps, where their properties and freedoms were taken away from them. The 1944 case of Korematsu vs. U.S. affirmed the constitutionality of this act. It took more than forty years later before the U.S. admitted fault and began to make $20,000 reparations to camp survivors. The relocation camps were an extreme example of the discrimination that existed during this patriotic time period. The Japanese-Americans were definitely victims of discrimination despite the patriotic time period during World War II, so the statement is true. 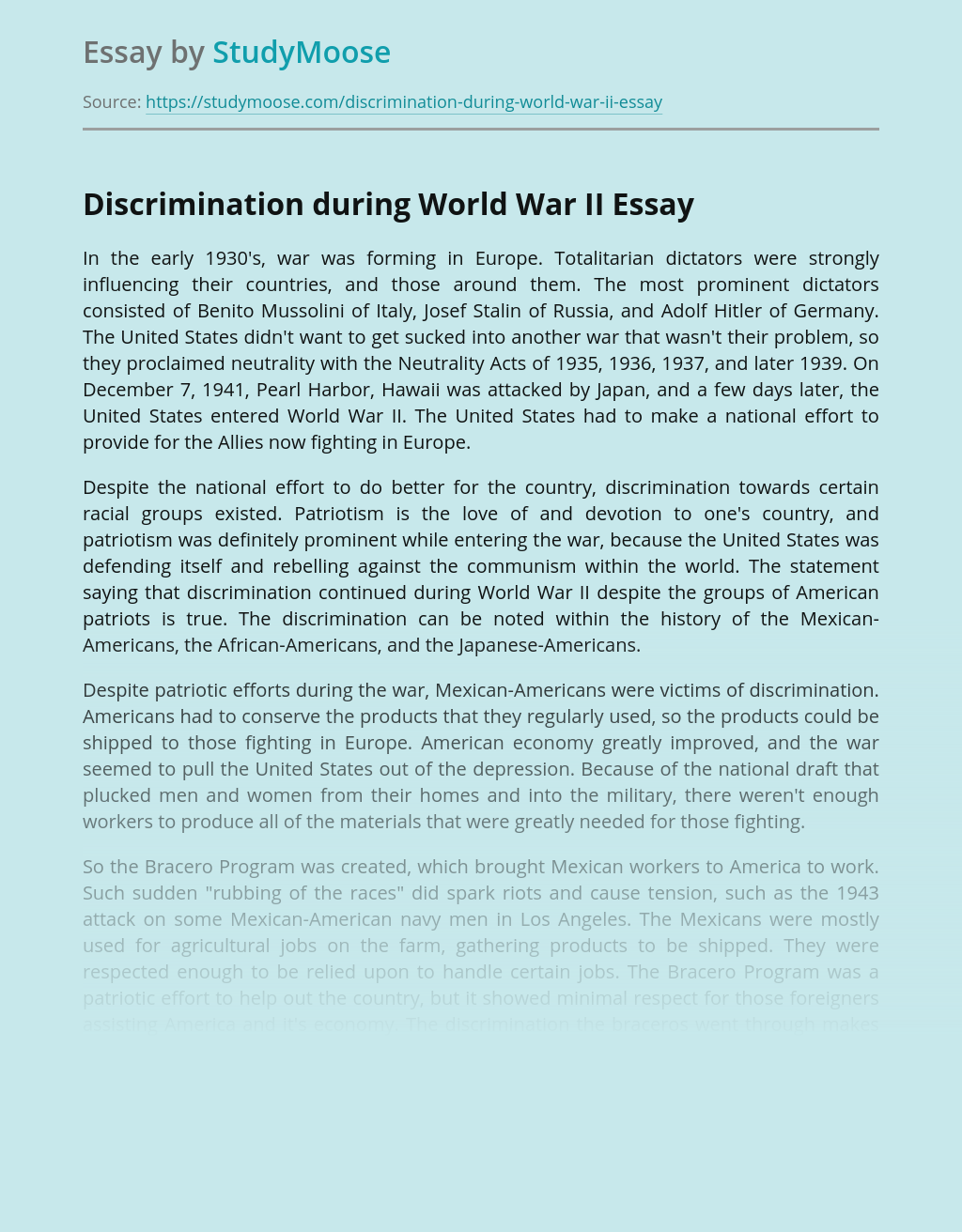 According to the famous Harvard psychologist, Gordon Allport, “Prejudice is an antipathy based on faulty and inflexible generalization. It may be felt or expressed. It may be directed toward a group of people or an individual of that group” (http://www. dictionary. com). Today, most people use the word prejudice to refer to a negative or...

Get Essay
Equality And Inclusion In Health And Social Care

Outcome 1.1 Explain what is meant by Diversity – Understanding that every individual is different, and being able to recognise and individuals unique differences, whether it be age, race, gender etc. Equality – Every person being treated equally and fairly regardless of cultural backgrounds, sexuality, beliefs. Inclusion – Being included without being limited or restricted,...

Discrimination in Health and Care Services

Effects on Conflict in Northern Ireland

Social segregation is one of the effects of the conflict on the people of Northern Ireland. The Protestants and the Catholics grew up in an atmosphere of tension and violence. They each received different education, each praising their own and condemning the deeds of the other. In addition, most of them live in separate residential...