The significance of television during Vietnam War

One of the most enduring myths in the recent history of war reporting is the ‘Vietnam Syndrome’, the widespread belief that the mainstream American media were opposed to the Vietnam War and openly hostile to the US military and its South Vietnamese clients; and ‘that as a result of their critical coverage they lost the war for the US’ (McLaughlin, 2002, p. 73).

This of course bears little or no relation to the media’s actual coverage of the war, yet it has shaped and influenced political and military control of the media in the subsequent conflicts from the Falklands War to the American invasions of Grenada and Panama and in the successive Gulf Wars.

Don’t waste time
Get a verified writer to help you with The significance of television during Vietnam War
Hire verified writer
$35.80 for a 2-page paper

By the mid-1960’s, television was considered to be the most important source of news for the American public, and, possibly, the most powerful influence on public opinion itself. As televisions became more popular in the home, more Americans began to get their news from television than from any other source.

Thus, as the Vietnam War dragged on, more and more Americans turned to television as their primary source for news. When news programs aired images of battles and death, Americans at home felt as if they too were in the jungles of Vietnam. Additionally, intense visuals helped explain the complex nature of war to Americans who could not understand the military’s technical language. Anchors and reporters quickly became trusted, household names because the public turned to them every night for the day’s information; Walter Cronkite was even referred to as the “most trusted man in America” throughout the war.

(McLaughlin, 2002, p. 75). This trust allowed the opinions and biases of television news personalities to have some influence on the way in which many Americans viewed the war. Thus, Americans increasingly depended on television for images and accurate accounts of the Vietnam War; what they were watching, however, were edited, thirty-minute versions of an extremely complex war. By the fall of 1967, 90 percent of the evening news was devoted to the war and roughly 50 million people watched television news each night. Up until this time, the war had strong support from the media, the public, and Congress.

The military continuously reported that the U. S was making encouraging progress. Gradually, however, support for the war began to decrease. Because no military censorship was established, journalists could follow the military into combat and report their observations without formal censorship. ‘Thus, as journalists saw more grisly combat, they presented the public with more graphic images. Also, for the first time, interviewed soldiers expressed their frustration with the progress of the war. ’(Brothers & Caroline, 1997, p. 120).

Support began to decrease in the fall of 1967, but the major turning point in television’s coverage of the war occurred during the Tet Offensive in late January 1968. ‘Television, however, portrayed the attack as a brutal defeat for the U. S; the media, not the military, confirmed the growing perception that the U. S was unable to win the war’. (Cumings & Bruce, 1992, p. 82) The percent of television stories in which journalists editorialized news jumped from 5. 9 percent before Tet to 20 percent in the two months after. The most significant statement came from the “most trusted man in America”, Walter Cronkite.

The intensely negative coverage of the war influenced both politicians and the public. Americans depended on television to see and understand the war, but the death and destruction they saw appeared as irrational killing when prospects for the war became increasingly negative and the majority of Americans withdrew their support for the war after the Tet Offensive.

The significance of television during Vietnam War. (2017, Feb 24). Retrieved from http://studymoose.com/the-significance-of-television-during-vietnam-war-essay 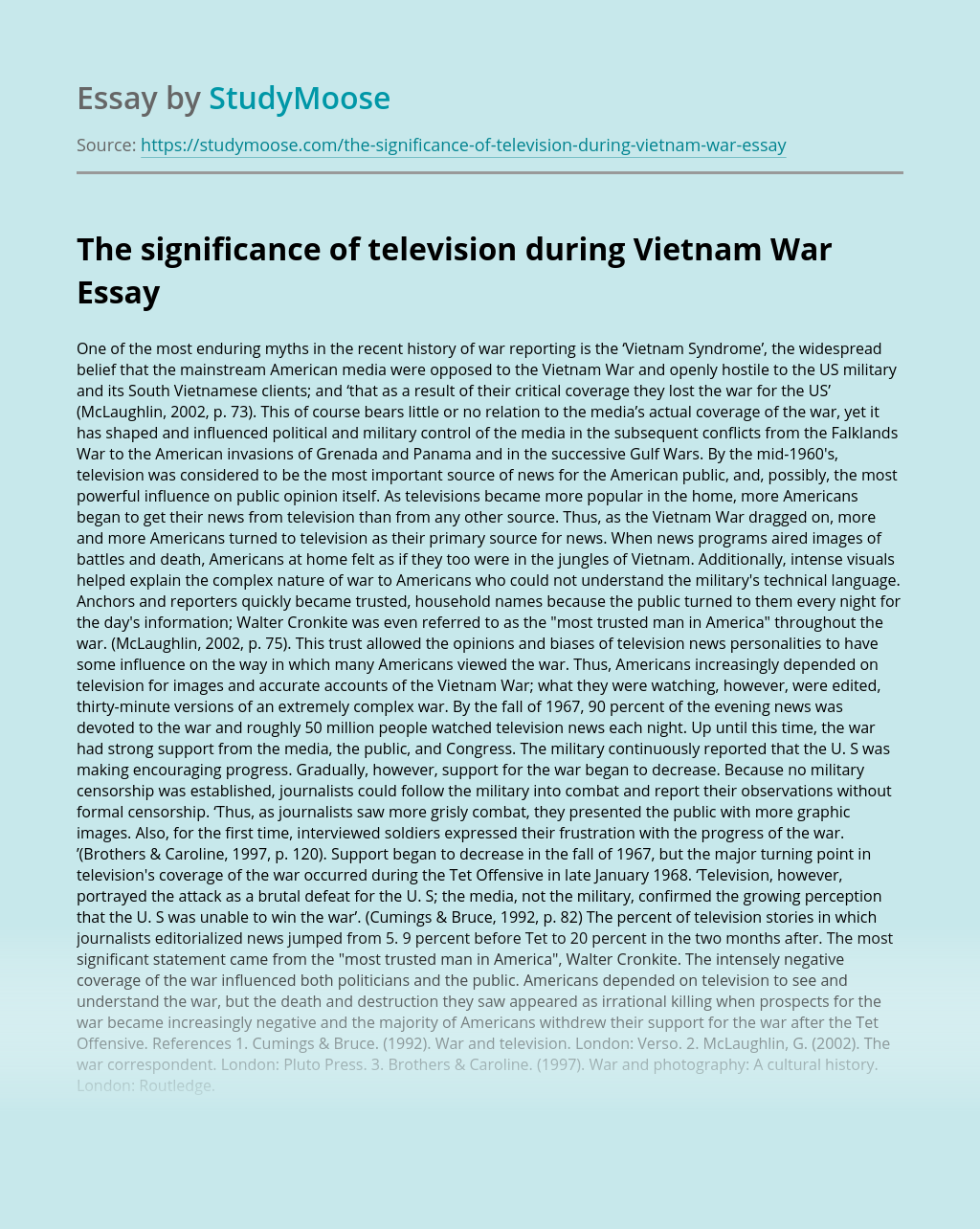 Don’t waste time
Get a verified writer to help you with The significance of television during Vietnam War
Hire verified writer
$35.80 for a 2-page paper
Stay Safe, Stay Original