Difference between being schooled and being educated

There are several different ways one can define being educated. It could mean having a continuing curiosity to learn more and use what we know to grow individually as a person or it could simply mean having a degree from an accredited university. Despite the several definitions of what it means to be educated, education has become an important part of everyday life. In Rodriguez’s essay, “The Achievement of Desire,” he struggles to find commonalities between his education and his family life.

Don't use plagiarized sources. Get your custom essay on
“ Difference between being schooled and being educated ”
Get custom paper
NEW! smart matching with writer

Rodriguez spent hours on his school work in order to be a “scholarship boy.” He became disconnected from his family as he struggled to connect with them, as his parents did not share the same volume of knowledge. Therefore, being a “scholarship” student is not necessary to succeed as an “educated” individual because you will never truly reach the goal of being “knowledgeable” but rather a great mimic of your own.

There is a fine line between being schooled and being educated.

One can be educated, yet not be schooled. Education never ends, life is full of learning opportunities. Rodriguez wants us to know that there is more to education than just spewing facts and doing anything to pass. For example, Rodriguez states, “His story makes clear that education is a long, unglamorous, even demeaning process – a nurturing never natural to the person one was before one entered a classroom” (Rodriguez 547).

The main source of schools ineffectiveness lies in their inability or unwillingness to induce change. Discourses learned in school enable individuals to define a contextualized personal identity.

This is what Rodriguez tells us he is able to do because he attended school. Rodriguez sought admiration from his teachers for his academic achievements, proclaiming that “A primary reason for my success in the classroom was that I couldn’t forget that schooling was changing me and separating me from the life I enjoyed before becoming a student” (Rodriguez 534).

He became a mimic of their ideas. Due to his mimicking behavior his personal development was stunned as he failed to use his own ideas to shape his own viewpoints. Going back to Percy’s argument he claims, “But the difference lies in the fundamental placement of the student in the world” (Percy 480). Rodriguez and Percy write about how students are “placed” in the world by teachers. As a result, it is important to remember that life itself is an education and our pursuit for knowledge never ends.

His misguided childhood anger at his parents limitations, became shame as he reached adolescence success. He loses all sense of himself as he attempts to separate himself from his home environment. Although his parents weren’t intelligent academically, they may be intelligent in other ways such as passing down traits that aren’t taught in schooling. Rodriguez states, “It was not that I ever thought they were stupid, though stupidly I took for granted their enormous native intelligence. Simply, what mattered to me was that they were not like my teachers” (Rodriguez 538). He found himself becoming irritated when his parents didn’t seem as capable as his teachers. Instead, Rodriguez saw his teachers as role models, not his parents. His mother received a high school diploma and went on to become a typist. His father came to America in hopes of becoming an engineer. Later on, he became a dental technician. Rodriguez separated himself from his uneducated parents by avoiding his Hispanic culture.

Being a “scholarship student” is necessary to succeed as an “educated” individual. In our educational system today, getting the “A” or obtaining the degree is what truly matters. I think radical changes are needed if we want to foster the creativity of individuals in solving problems, rather than simply turning them to fit in the system. Education must teach children how to make basic moral choices in life. Nowadays students are conformed to specific school standards where passing is the only thing that matters. Our creativity is stripped away as we focus on memorization and simply becoming the “consumer.” Robinson mentions, “Many brilliant people think they’re not because they’ve been judged against this particular view of the mind” (Robinson). Standardization is inescapable forced inauthenticity. Our school system is standardized, and we have lost our sovereignty by becoming “consumers.” Therefore, the loss of sovereignty is the loss of individual thought. It affects students because they have no way of thinking for themselves. Instead, we are taught through memorization and discouraged to intellectual ideas of our own. We mimic the patterns that are set to classify us as “smart” or “non-smart.”

Rodriguez’s essay shows his transformation from childhood to manhood. He characterizes his achievements as pure memorization. As a “scholarship boy” Rodriguez’s success was characterized by his level of memorizing information. “To pass an examination, I copied down exactly what my teachers told me. It would require many more years of schooling (an inevitable miseducation) in which I came to trust the silence of reading and the habit of abstracting from immediate experience – moving away from a life of closeness and immediacy I remembered with my parents – growing older – before I turned unafraid to desire the past, and thereby achieved what had eluded me for so long – the end of education” (Rodriguez 550). Being a “scholarship boy” is going to leave you feeling “miseducated” and “unfulfilled.” He doesn’t get to see what it actually means/feels to be a scholar. Schooling has shown him ways to look at the facts rather than having an open mind filled with your own ideas. He realizes that the “end of education” is nothing but isolation from the outside world. Rodriguez looks back at his life and realizes that he has no regrets.

The “symbolic complex” through our education system is through a person’s ideas and expectations of an idea situation, such as schooling or formal education. These are mended together through outside sources. In our education system today, students believe that going to school and getting the “A” will get you the degree to move on to a career of your choice. Rodriguez realizes that his views shifted as he moved from elementary school through college and a writer. Rodriguez’s choice to be a “scholarship boy” falls into Percy’s definition of sovereignty. What Percy describes as “loss of sovereignty” is preconceived notions of what it is supposed to be. We become disappointed when what we see doesn’t meet the preconceived idea. We have the power to recognize yet it is becoming so scarce. We must unwrap our “educational package” to see beyond wonders.

To conclude we must see education as a system in which we install students with skill sets that are integral to society. Schooling should be a place to broaden students minds. The purpose of education is to be a functioning member of society. The education system must get away from simply following the rules in order to pass. I think education is important, but they don’t actually teach you how to live on your own, how to pay bills, etc. Then when you actually have to do it, you’re unprepared. Richard’s story became my story. During my education I was the “consumer” trying to get that “A” to pass the class. The end goal is to receive my Doctorate degree to pursue a career as a Physical Therapist. In high school my path was predetermined. As I entered college, I realized that I was in control of my own reality. I didn’t have to go by what others thought and therefore base my viewpoints off of someone else’s view. Education encompasses the world around us, not just the books and courses.

Difference between being schooled and being educated. (2019, Dec 10). Retrieved from http://studymoose.com/difference-between-being-schooled-and-being-educated-essay 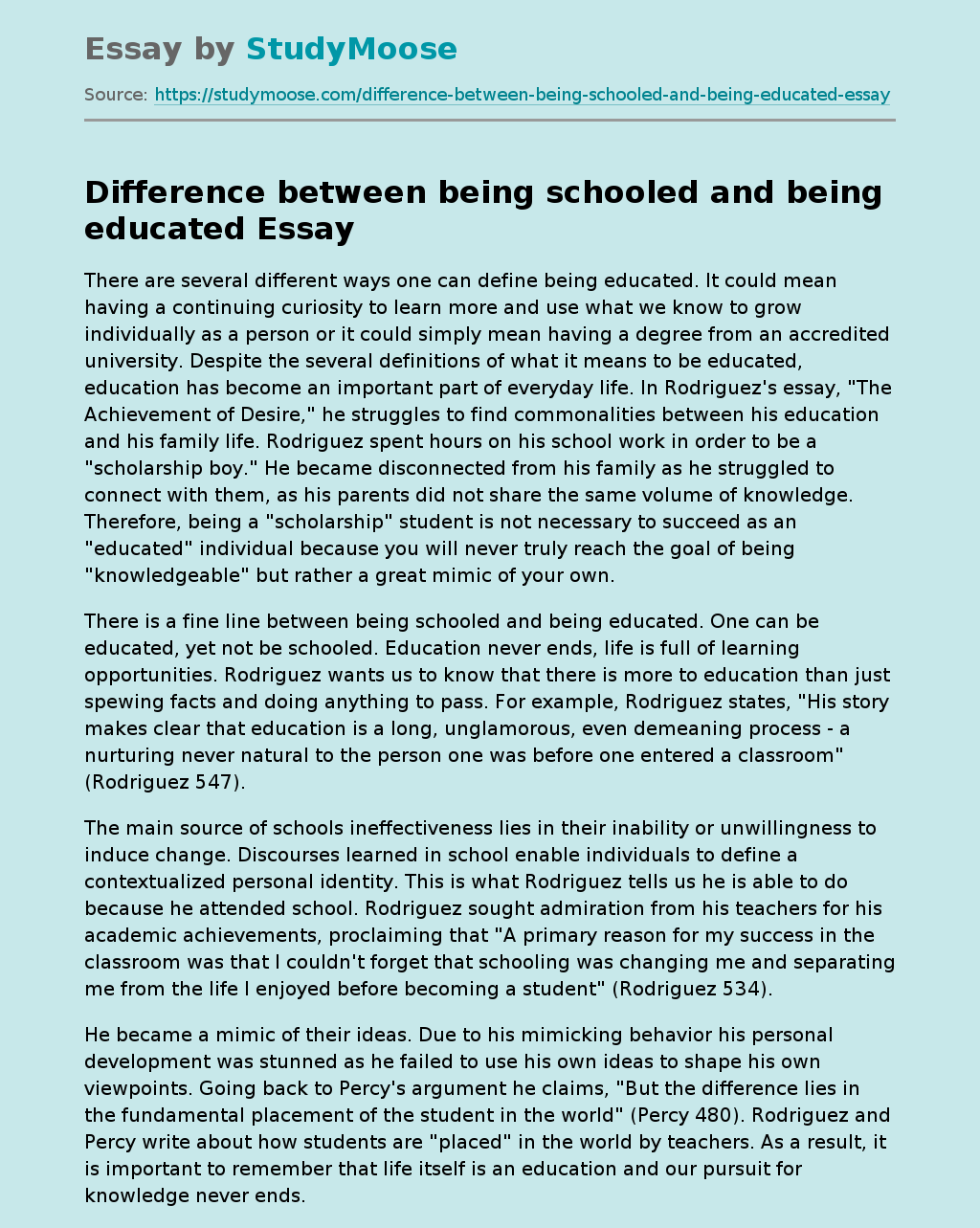