What’s Your Definition of Being Well-Educated?

Alfie Kohn as well as Nel Noddings, a professor emerita at Stanford University, expresses their thoughts on how we as people have a misconception of “Well-educated people”. Many people have different opinions on what they think can categorize people as being well –educated. Based on my readings of “What Does it Mean to be Well-Educated” by Alfie Kohn, on the readings of What the Bible says well-educated person is, and based on my personal experience, I have come up with what I think defines a well educated person.

Don't use plagiarized sources. Get your custom essay on
“ What’s Your Definition of Being Well-Educated? ”
Get custom paper
NEW! smart matching with writer

Does being well-educated mean having a lot of knowledge? What is knowledge?

“Thanks to the internet, which allows writers and researchers to circulate rough drafts of their manuscripts, I’ve come to realize just how many truly brilliant people cannot spell or punctuate. ”(Alfie Kohn) Just like Alfie Kohn’s wife I too have discovered that being Well-educated does not mean you have to know how to spell or even do simple math.

All My life I have been pressured to get good grades. I was good at literature (poetry) and art but they were not areas that were qualified as important.

I have 5 siblings all of which are very smart. That is not to say that I am not smart, I just was never smart in the areas that counted. My Mom graduated from high school when she was only 16 and all of my brothers and sisters before me always had grades above 80s. Even my little brother is a straight A student.

Every day kids are pressured in school to get good grades and to obtain knowledge. Is it really knowledge that we are gaining? Can one be brilliant and not know how to do the basic things that most consider to be evidence that a person is Well-educated?

The difference between having knowledge and being Well-educated

First we must understand the difference between having knowledge and being Well-educated. Knowledge is “Acquaintance with facts, truth, or principles, as from study or investigation; general erudition. ” Being well-educated is “having undergone education. ” As we can see, Knowledge is based on gaining truths, principles, and facts by having gone through, experienced or had some sort of encounter with the subject at hand. Being Well-educated means having undergone schooling. Anyone can go to school and learn things here and there and anyone can know a slew of random facts.

But knowing something because you were forced to learn it and learning something because you experienced or put what you knew into practice are two different things. “…The best sort of schooling is organized around problems, projects, and questions – as opposed to facts, skills, and disciplines. ” I was never good at math in high school; no one was really good at math in my class. My teacher was from the Philippines. She was one hard to understand and she came from culture where subjects such as math and science were taught at a very young age.

Where I come from things such as history and literature are important and math and science are the areas where most people struggle. My teacher Ms. Faustino was superb in her area of study she just did not know how to teach. She would get mad if we asked questions, telling us that in her country kids in 3rd grade were doing junior and senior math. Then again when all of us failed the test she would get mad that no one said they didn’t understand. There were a select few that understood perfectly and then the rest of us did what we had to do to pass the year.

For most people that involved cheating, but me I never did. For one, my teacher scared me and I felt like I would get caught. Second, I have a really guilty conscience. So needless to say that I got the grade I deserved while the rest tended to do a lot better. Does that mean I wasn’t Well-educated or did not have any knowledge? Yes and no. I was not smart in math, that much is true, but that doesn’t mean I was not good at other subjects. Another class I had trouble in in 8th-9th grade was science. My teacher was from India.

Her method of teaching was not normal. After a few years of working at my school she got very lazy and in return she was a very strict teacher. She was a teacher that would write a lot of stuff on the board and then read out some of the questions to the test. Than using your notes you had to find the answer and if your answer on the test was not word for word what was in your notes, you got the answer wrong. We would also have to memorize things like diagrams and the periodic table. At fist I didn’t understand her method of teaching, because I wasn’t used to it.

What we were learning but had difficulty learning it

I tried to understand what we were learning but had difficulty learning it. Not until the middle of my 9th grade year did I stop trying to learn and instead just memorized the answers just like everyone else in the class. Just because I had trouble memorizing facts rather than understanding them, does that make me less educated then the rest of my class that memorized instead of learned? “In any case, no single test is sufficiently valid, reliable, or meaningful that it can be treated as a marker for academic success. ” Lets say that there were two people in front of you.

One could recite Bible verses and tell you what chapter to find what, but cannot explain what the verses mean. The other one does not have the Bible verses memorized but can explain and give personal examples of what God Was referring to and how to react or go about the verse. Who would you consider knows more? If being Well-educated was based on who knew more verses and facts about the Bible than who took what they did know and acted it out and applied it to their everyday lives, then the first person would be considered the most Well-educated.

Not just listen and memorize but really and truly understand it

Any one can know and memorize a bunch of facts but one who is knowledgeable will know how to interpret the things they know and test them and live them out. “Knowledge is acquired, of course, but in a context and for a purpose. ” In Proverbs 1:7 it says, “The fear of the Lord is the beginning of Knowledge, but fools despise wisdom and discipline. ” Then it goes on to explain in Proverbs 1:8-19 that the words and teachings of your parents as well as what the Bible teaches will become a basis of your knowledge.

If you listen and memorize what others say without creating a basis of knowledge for yourself, you will be easily tricked into believing what is wrong is right. So according to God’s Word our purpose for the having knowledge is to steed fast to the truth. Which are the word and the teachings of your parents. Those who do not listen to the truths of God and there parents and rather memorize and believe the things that other people say as true are fools. If you don’t have a basis of understanding and principles then how can you really be knowledgeable?

That’s is not to say that you don’t need to know facts and you don’t have to learn in school, but rather to not just listen and memorize but really and truly understand. Compare what you learn in class and from the media or even from your close friends; to the teachings and the things that you know are true due to the Word of God and your parents. One can be “well-educated” and be naive. In order to be Well-educated I think, is to know where you stand know your values and principles listens to the teachings of others and based on what you know figure out what is true and not true.

In my opinion one that really knows about something; that has studied it and proved in their minds to be true and have lived it out; are more educated than someone who believes everything they hear and just knows a bunch of facts instead of actually understanding them. But the truth is my definition is just that, MY definition. There is no specific definition of being Well-educated because people learn something new every day whether they believe they have or not. So why strive so hard to be Well-educated if Learning is a process that never stops?

What’s Your Definition of Being Well-Educated?. (2020, Jun 02). Retrieved from http://studymoose.com/whats-definition-well-educated-new-essay 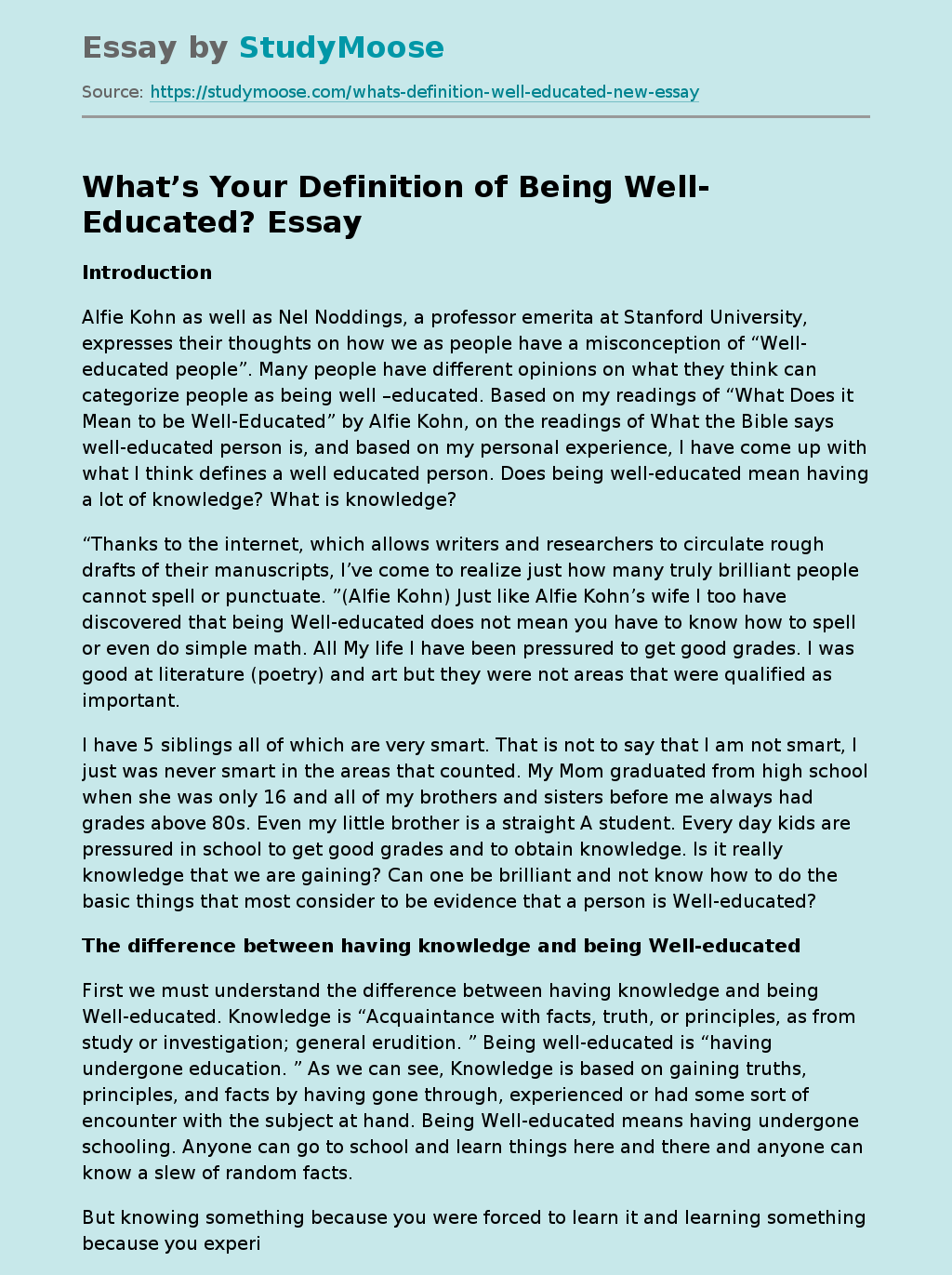