FAMILY HISTORY
Please list all brothers and sisters, and any other children living with the family
Age Sex Relationship to this child living at home?

Rita G. Lapid ———–Female—————–4 yrs old——————- Only child
CHILD CARE
If primary caregiver works outside the home, please provide the following information.
Who cares for this child when caregivers are gone? The caregiver is basically the child’s mother who is a housewife. If in case the mother is gone, the father or the housemaid takes care of the child.
How many hours per day is this child in a child-care setting? 5 hours per day, 4 days a week
How many different people care for this child? Usually the mother takes care of the child; however, if the mother is not available, the father or housemaid assumes the role.
PREGNANCY
Planned pregnancy? Yes
Pregnancy under doctor’s care: Yes
Number of previous miscarriages: n/a
Check any of the following complications that occurred during the pregnancy
______Difficulty in conception ______Toxemia _______ Abnormal weight gain
______Measles Check Excessive vomiting _______German measles
Check Excessive swelling Check Emotional problems Check Vaginal bleeding
______Flu ________Anemia Check High blood pressure
Rh-incompatibility: n/a
Maternal injury:

Paracetamol——————————–500mg————————- As needed
BIRTH
At this child’s birth, what was the mother’s age? 27 yrs old Fathers Age?28 yrs old
Mother’s age at birth of FIRST child? 27 yrs old
Was this child born in the hospital? Yes
If No, where? n/a
Length of pregnancy: 9 months and 5 days Birth Weight: not remembered by mother
Length of Labor: n/a Apgar Score: n/a
Child’s condition at birth: normal and stable
Mother’s condition at birth: normal and stable
Check any of the following complications that occurred during birth:
______Forceps used ______Breech Birth ______Labor Induced Check Caesarean Delivery
Other Delivery Complications: n/a
Incubator: No How long? n/a
Jaundiced: No Bilirubin Lights? No If Yes, How Long? n/a
Breathing Problems right after birth: n/a
Supplemental Oxygen: No If yes, how long? n/a
Was anesthesia used during delivery? Yes If yes, what kind? n/a
DEVELOPMENT
At what age did this child first do the following? Please indicate year/month of age.
Turn Over: 4 mos. Walk down Stairs: 1- 1 and 5 mos. yr. old
Sit Alone: not observed Show interest in or attraction to sound: not observed
Crawl: 9 months Understand first words: 2 yrs old

My daughter is having a hard time riding her bicycle. She seems to play with it but not like any other kids. She just stairs on it, touches it and every time we place her on the bike, she gets disappointed. It is a bit weird to have a behavior like that.

I have not seen her skipping ever since. I don’t know why. She only plays with her dolls and seems to be introvert in terms of her behavior.

She does not play throw and catch. If a ball for example is thrown to her, she just looks at it and dodges it.
During this child’s first four (4) years, were any special problems noted in the following areas? If yes, please describe.
Eating: No
Motor skills: Yes

She moves less frequently and does not show any active participation in school, other children or even inside the house. She just plays with her dolls, which seems to be her only world.
Sleeping too much: No
Temper tantrums: No
Excessive crying: No
Sleeping too little: No
Failure to thrive: No
Separating from parents: No
Which hand does this child used for writing or drawing? Right Eating? Right
Has this child been forced to change writing hand? No
MEDICAL HISTORY
Childhood Illnesses/Injuries
Please check the illnesses this child has had and indicate age, year and month
Measles: No      Rheumatic fever: No

Starting out with the brief background, the client is the only child of the couple with one housemaid living together in the capital city of Manila. The child, having the primary concern of language development delays, has been recommended by the school pediatrician for a psychological consultation. The primary breadwinner of the family is the father who is actually a civil engineer, while the mother resides solely in the house as the housewife. The care of the child is distributed among the three individuals in the house; however, the primary care is given by the mother herself. The child is studying in a private school, NJS, in a kinder-1 preschool level.

In the initial statement mentioned by the mother, the child is said to be having delayed speech problem; however, other fields of child development are normal in the case of the child. Upon assessment of care delivery, it has been concluded that the child receives specific parental attention of the mother in the child’s earliest years. The care of the child is subjected to three important personas with housemaid as the last option of care facilitator. In such case, we can conclude that the care needed by the child is adequately provided by appropriate significant individuals.

There have been no conception anomalies noted in the assessment phase; hence, clinical or congenital contributors are most likely negative in terms of child condition effect. However, the mother has had excessive swelling, emotional problems due to personal reasons, slight vaginal bleeding noted and occurrence of high blood pressure. Some of these signs and symptoms are most commonly associated with pre-eclamptic effect (Erickson, 2005 p.23), although the mother has not indicated any possible diagnosis of pre-eclampsia during pregnancy.

Language development can be affected by drug intake during period of pregnancy especially during times of critical brain development particularly during the 1st quarter of the pregnancy (Johnson & Eviritt, 2000 p.216); however, the only medicine that has been noted is Paracetamol, which apparently is not anymore significant since the intake is only during times of fever. In addition, the pregnancy has not suffered any significant medical difficulties aside from the following mentioned.

Analyzing now the developmental features of the child, the speech developmental delays are the evident features of the child. The child has spoken her first words at the age of 3 yrs old, which is supposed to be less than one year old. Moreover, the child has not spoken any complete phrase, but only baby-talk words, da-da or ma-ma. The mother mentioned that the child speaks less frequently, which is contrary to the normal language development of a child that is, supposedly, speaking more than 2000 words at the age of one (Philipps & Guilherme, 2004 p.12).

During the assessment of the cues that might participate in the relationship of such effect, other behavioral alterations are observed. The child manifests inappropriate introvert behaviors that are usually found in some delayed psychological and/ or mental impaired condition. The child is having difficulties riding bicycle as well as skipping; however, the problem, basically, is not due to motor impairments but rather due to substantial cognitive and psychological in the essence. Other associated problems are not evident in the child, especially physical in origin.

Another manifesting deviation on the child’s behavior is primarily related on her social character. The child enters school with other kids; however, as stated by the mother, the child possesses an isolative behavior that tends to remove her attention towards mingling with other kinds. Instead, the child focuses imaginative play in an object, particularly her doll.

If we analyzed the given statement in terms of part records, the child has never had any negative experiences in the past, such as trauma, rape or accident, which may have caused this certain behavior. The client has never had any physical impairment or a disease that may have contributes to this psychological manifestations. Moreover, the child is not into medication, treatment procedures or psychological supervision that aims to take hold of the situation. In fact, this is the first time that the child is having her psychological assessment; however, she has had initial check-ups that resulted to referral for psychological examination.

In addition to the client’s assessment, she also possesses poor postural features noted on her back, and urination in bed, although this has been alleviated just recently through trainings. Moreover, the client has manifested enigmatic behavior such as rocking back and forth with less perception on her environment.

Discussing now possible disorder pathology, the case of the patient has wide range of possibilities in terms of disorder development. The following two conditions are the closest; however, still requires further validation and assessment of the client features. The first is the possibility of Asperser’s Syndrome progression, which is primarily evident due to her poor social capacity, delayed language progression and imaginative play with enigmatic behavioral flaws. Second, is language development delay, which involves the primary concern of the patient that is speech delay.

In the analysis of possible Asperger’s syndrome development, the patient involves the primary signs of the condition such as the impairments in language, social participations and imaginative play. However, the only validated impairment is the speech delay. Other impairments are resulted by the parental observation, which apparently, still requires further assessment on the child. The child may exhibit these behaviors as due to situational causation, which happens to be unfamiliar with the parents, or a behavioral altering family situation that displaces the normal behavior of the child.

This may be difficult to diagnose as of now since, the case of the child does not support the major and specific behaviors associated with the condition. Although if the child progresses in this type of developmental pattern, she may acquire maladaptive behavior such as introversion, social self-degradation, self-infliction, and worst of all, further progression towards Asperger’s condition.

The following implications are based on critical interpretation and analysis of the gathered data from the psychological assessment history taking. It does not, however, conclude that the client possess the featured conditions. Although, this are the possibilities that may incur to the child if behavioral patterns progress. 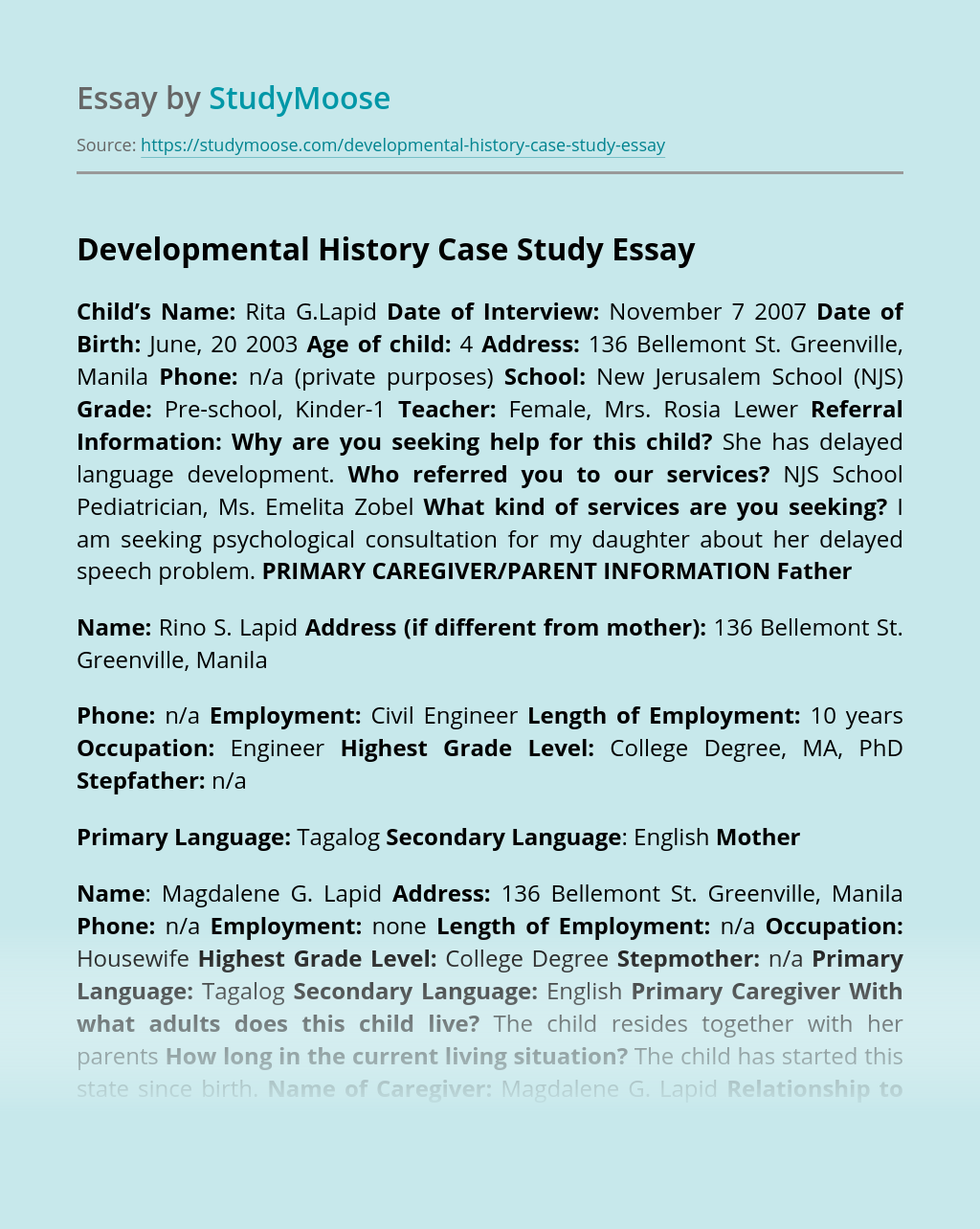