Initiative Versus Guilt (Purpose) Erikson believes that this third psychosocial crisis occurs during what he calls the “play age,” or the later preschool years . During it, the healthily developing child learns: (1) to imagine, to broaden his skills through active play of all sorts, including fantasy (2) to cooperate with others (3) to lead as well as to follow. Immobilized by guilt, he is: (1) fearful (2) hangs on the fringes of groups (3) continues to depend unduly on adults and (4) is restricted both in the development of play skills and in imagination.

Don't use plagiarized sources.
Get Your Custom Essay on Erik Erikson’s Third Stage Initiative vs Guilt Just from $13,9/Page

Children at this stage explore beyond themselves. If exploration, projects and activities are effective -> learn to deal with people and things in constructive way and have strong sense of initiative. If they criticized or punished -> learn to feel guilty for many of their own actions. At this stage children become curious about people and imitate the adults around them. They begin to plan activities, make up games and initiate activities with others.

If given this opportunity, children develop a sense of initiative and feel secure in their ability to lead others and make decisions.

If children are not able to take the initiative and succeed at appropriate tasks, they may develop a sense of guilt, which can lead to inhibition. Children are asked to assume responsibility for their bodies, their behavior, their toys, and their pets. Developing a sense of responsibility increases initiative. Uncomfortable guilt feelings may arise, though, if the child is irresponsible and is made to feel too anxious. Erikson has a positive outlook on this stage. He believes that most guilt is quickly compensated for by a sense of accomplishment.

We also begin to use that wonderful word for exploring the world—”WHY? ” Things fall down, not up. Round things roll. They learn how to zip and tie, count and speak with ease . Existential Question: Is it OK for Me to Do, Move, and Act? He said that at this stage we usually become involved in the classic “Oedipal struggle” and resolve this struggle through “social role identification. ” If we’re frustrated over natural desires and goals, we may easily experience guilt. The most significant relationship is with the basic family.

Support is a key issue in this stage as well. If parents and preschool teachers encourage and support children’s efforts, while also helping them make realistic and appropriate choices, children develop initiative- independence in planning and undertaking activities Without support, a sense of guilt can develop and follow through the rest of the stages until the conflict is dealt with. But if, instead, adults discourage the pursuit of independent activities or dismiss them as silly and bothersome, children develop guilt about their needs and desires.

[6] Guilt is a confusing new emotion. They may feel guilty over things that logically should not cause guilt. They may feel guilt when this initiative does not produce desired results. Within instances requiring initiative, the child may also develop negative behaviors. These behaviors are a result of the child developing a sense of frustration for not being able to achieve a goal as planned and may engage in behaviors that seem aggressive, ruthless, and overly assertive to parents.

Aggressive behaviors, such as throwing objects, hitting, or yelling, are examples of observable behaviors during this stage. ** Children who are successful at this stage feel capable and able to lead others. Those who fail to acquire these skills are left with a sense of guilt, self-doubt, and lack of initiative. Existential Question: Is it OK for Me to Do, Move, and Act? A sense of purpose is the virtue she will gain when things go well in stage three. 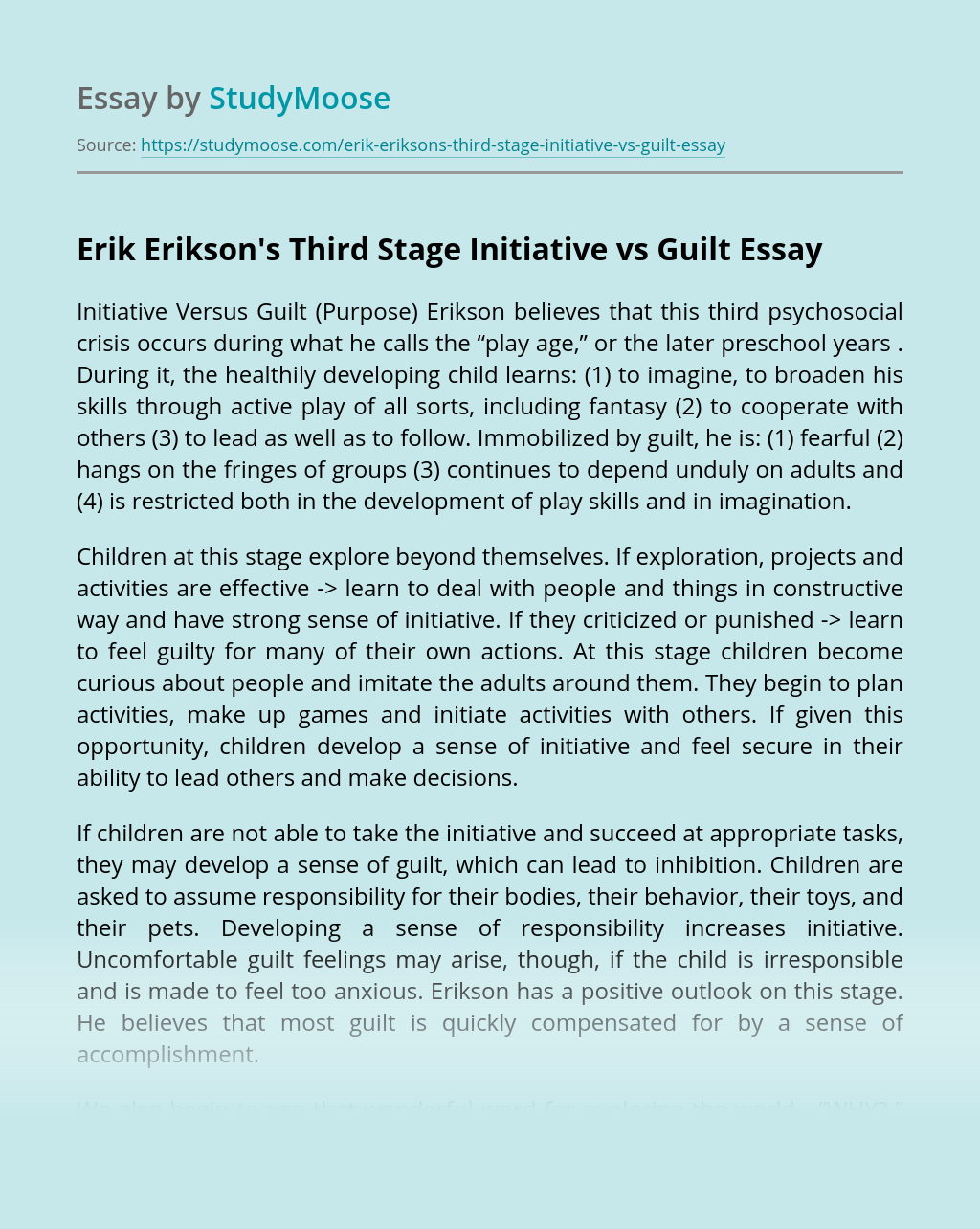 The Ghost of Christmas past

View sample
Is Violence in the Media Controversial?

Do you have a particular song or movie that you just really love. If you do, have you ever considered the kind of music you listen to or the movies you watch influence the decisions you make about almost everything. This may be really obvious, but a lot of people underestimate it: It’s the power...

Stress is an inescapable part of life. Our tasks, friends and families are constant prospective sources of tension in our lives. Individuals are continuously on the look for ways to handle their stress. Yoga has actually been shown as a method of handling tension so in this essay I will talk about how yoga has...

On the 15th day of the Chinese Lunar Calendar, individuals of Chinese descent throughout the globe will be celebrating the traditional Mid-Autumn Festival, also known as the Mooncake Festival. It is the third major celebration on the Chinese lunisolar calendar which incorporates elements of both a lunar calendar and solar calendar, which is not uncommon...

In Sanford J. Ungar’s ‘The New Liberal Arts’ he discusses the pros of going for a liberal arts degree. He talks about common misperceptions about liberal arts and then gives his opinions on them. He gives his perspective of a liberal arts college and gives examples as to why liberal arts is the best way...