Committing suicide, the act of deliberately killing oneself is a tragedy that would bring long-lasting traumas to remaining friends and family members. This has become more familiar and a severe issue globally throughout the past decade among adolescents who consistently deal with deprivation and psychological illness in their daily lives. There exist plenty of causes for such phenomenon, which include burdens from education, sexuality, and inferior relationships with families. For such reasons, 1.4% of all reported deaths worldwide were due to suicide (World Health Organization, 2016) and the suicide rate is predicted to be increased if actions are not taken.

Don't use plagiarized sources. Get your custom essay on
“ Depression and Suicidal Ideation among University Students ”
Get custom paper
NEW! smart matching with writer

The alarming increase in the suicide rate among adolescents could be settled by the organization of a more in-depth level of psychological autopsy in schools, more welcoming atmospheres provided by various environments for all identities, and the acknowledgment and further action of suicide for family members.

In recent years, the incidence of adolescent suicide has had a sharp rise. An estimated portion of 10% of youths have attempted suicide across nine countries, and it is very probable that 10% is an underestimated number of cases of actual suicide attempts (Safer, 1997).

Not only has the suicide rate among youth full-time students escalated by 3.6% (Center for Suicide Research and Prevention, 2018) locally, yet committing suicide is at present the second leading cause of death among the 15-24 age group in the year 2016 (Mazza and Reynold, 1994). What is more, the World Health Organization (2016) stated that one life is taken by the act of suicide every 40 seconds, and is estimated to decrease to 20 seconds by the year of 2020.

Burdens from education are one of the major reasons for the act of suicide in relation to young adults. They tend to lack recognition of proper techniques to vent tension they receive, disregarding how they are tackling with studies or the negative emotions that is brought by the fact that they are away from home. According to researches and surveys with 962 college students concerning suicidal ideation and attempts from depression, 777 (81%) of the respondent has confronted with depression since the commencement of university, 307 (32%) of the students had the idea of committing suicide and 42 (4%) of the crowd had attempted suicide throughout their university life. Furthermore, being apart from one’s family also contributes to depression and hence the concept of suicide. Striving for academic success, containing uncertain academic or career goals, and being away from home, a plethora of college students experience severe depression, sufficient to cogitate suicide. (Westefeld, J., Whitchard, K. and Range, L., 1990)

It is essential for educational institutions to maneuver measures for the prevention of suicide among adolescents. In-depth psychological autopsy, on this occasion, would be a suitable treatment in soothing the incidents of suicide. To give an example, secondary schools and universities can establish an organization concentrating on comprehensive research for cases of completed or attempted suicide, thus providing various types of assistance. This would include a psychological profile on suicidal individuals by reviewing student records and meeting with staff on campus, friends, or family who may be aware of the emotions, thoughts, and behaviors the sufferer is experiencing or have experienced. A review team that can consist of the director of the counseling center along with other professions involved in the crisis management, for example, campus security, student health and professionals students of student affairs, ought to be a part of the review team of an on-campus psychological autopsy (Grieger & Greene, 1998).

On top of strains that are received from education, sexuality can also lead to mental issues that would cause suicidal conceptions and attempts. Despite that authoritative data on suicide rates are unavailable among lesbian, gay, bisexual, transgender, transsexual, queer, questioning, intersex, ally, asexual and pansexual (LGBTTQQIAAP) students, owing to the fact that such information is not typically presented in death certificates, “LGBTTQQIAAP” adolescents ordinarily report greater levels of depression (D’Augelli, 2002; Westsfeld, Maples, Burford and Taylor, 2001) and substance abuse (Bontempo and D’Augelli, 2002), which both contribute to a high extend to suicidality (Russel and Joyner, 2001).

Creating a safe and welcoming environment, not merely from school campuses but the society as a whole, for youngsters with the sexualities of LGBTTQQIAAP would bring a positive outcome regarding their risks of experiencing depression and self-destruction. It is crucial for people of various identities to feel embraced no matter where they go. Blanchard and Thacker (2007) suggested that the generation of a safe environment on campus for people with diverse sexual orientation is incorporated with increasing the ability and willingness of faculty, staff members, and students to socialize with students taking no notice of their sexual identity.

Another major stimulation for teenage suicide would be having poor relationships with family members since childhood. It is proved that students with suicidal thoughts are reported with a greater quantity of parental conflict, worse relationships with their fathers, one or more parents with substance abuse issues, resulting in substance abuse themselves (Wright, 1985). This phenomenon could be caused by long-term mental burdens that the individual has suffered since young, in addition, the lack of opportunity for them to give voice to such negative emotions.

In order to prevent “victims” with mentioned family backgrounds to die by their own hands, parents who perceive a sense of rather serious conflicts among their families ought to be aware of measures that could be taken aiming at the precaution of suicide. Barrero (2008), advocated that teenagers, particularly those who experience persistent family quarrel, should never be left alone, whilst every family member should be made aware of the subject’s suicide crisis so that they could observe possible symptoms of suicidal behaviors and hence provide emotional support. Likewise, it should also be a responsibility by the government to promote such information to every family, in furtherance to raise awareness for suicide avoidance.

By and large, exertions must be taken to prevent deteriorating suicide rates among secondary school and university students. It is high time the schools, parents, the government, and the society as a whole, to work collaboratively to tackle the problem of swift intensification of juvenile suicidal incidents. Nonetheless, the mentioned suggestions and solutions are solely a few of the myriad partial fixes for the concern of adolescent suicide. Ergo, it is yet in need of the hour for researchers to conduct a permanent solution. 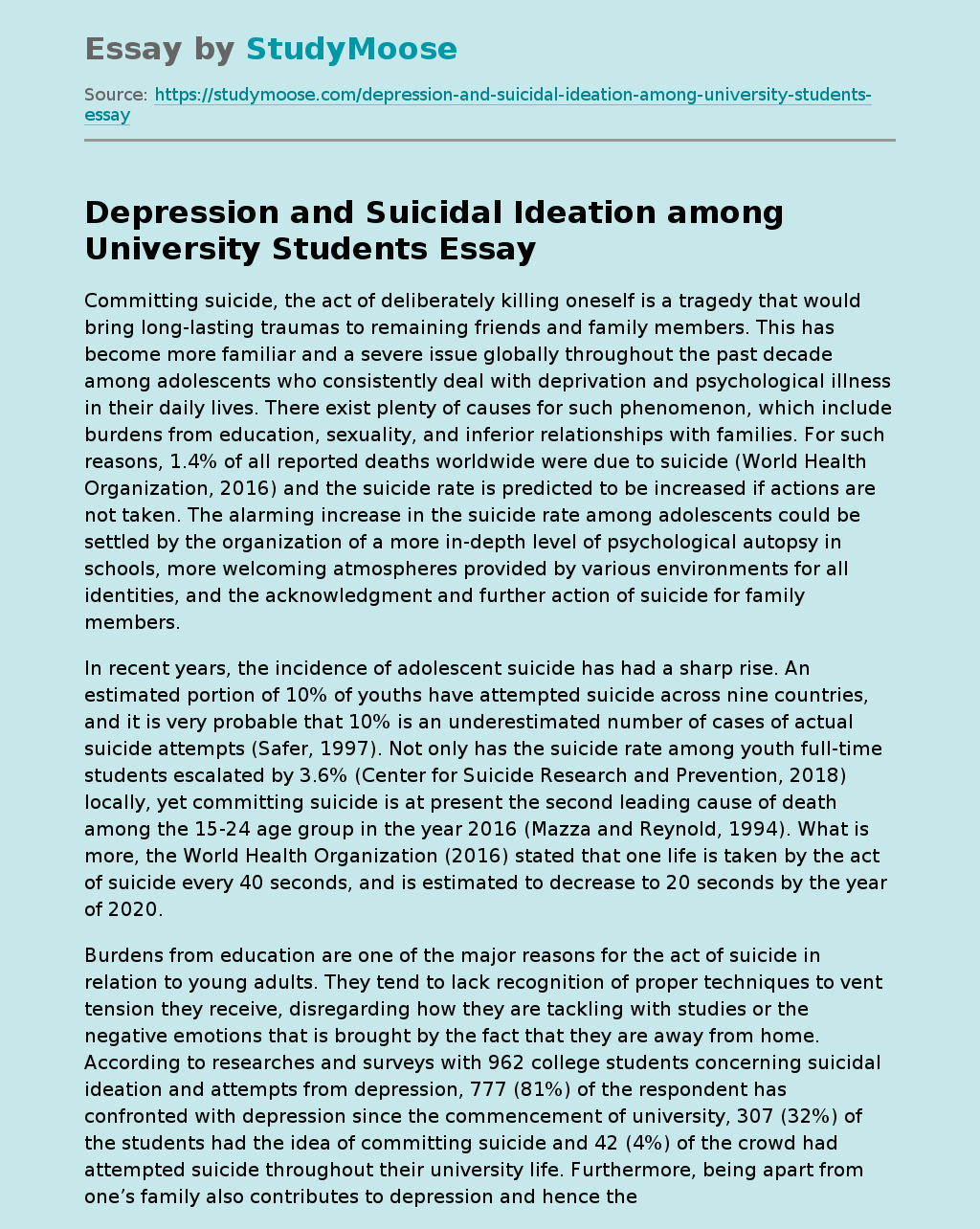