Death of a Salesman Context

Death of a Salesman is a play that consists of a HISTORICAL background which is key to understanding the play. It was written in 1949, just a few years after the World War ll was over, meaning the United States, where the play occurs, was going through many changes. For example, the war caused an increase in industrial production markets and non-farming business. For the poorest Americans, however, the economic situation was not improved as America started having high inflation, causing problems for the poorest citizens to purchase the basics.

Don't use plagiarized sources.
Get Your Custom Essay on Death of a Salesman Context Just from $13,9/Page

Also, the government started to create policies which helped larger corporate farmers but not smaller farmers. Happy, a sales clerk and Biff, a farm worker, had the lowest-paid jobs in the country, leading them to some trouble in maintaining dignity in society. For Americans, dignity and pride were very important things. Due to their victories during the war, Americans felt proud and had a feeling of superiority over the world. This lead to their need of proving that capitalism was better than communism.

Because of this, Americans felt responsible for protecting their nation from any influences from communist Soviet Union. This period of time where Americans felt the obligation to achieve financial success in order to show gratitude for the liberty they had as a democratic society and also to defeat the Soviets is now called the Cold War era. During this period of time, people like Willy relied too much on long-term credit to show they were financially successful and ended up having trouble in giving their families the basics. In the play, this Cold War attitude is shown by Willy’s preoccupation with his position in society and financial status. Willy’s worry also represents some of the SOCIAL context in the play as he fears not being accepted in society; he wants to be “well liked”. American society changed after WWll. Before, people were motivated by morals and rules but after the Cold War era started, Americans became motivated bywhat others thought of them. Willy represents the people in American society who lost their identity due to their need to achieve social standards.

This idea is reflected at the end of the play where Biff says that Willy “didn’t know who he was.” This social change may have been a cause of POLITICAL change because, as a result of The Great Depression, American government became more influential on citizens’ daily lives. Because of this, and also due to an increase in media communication such as radio and television, Americans started to feel like they belonged to a large, connected society and along came a desire to be accepted by their peers in society.

Miller also shows some of the CULTURAL background behind the play through three of his main characters: Willy, Ben and Biff as the three of them, similar to many Americans at the time, show they are eager to achieve “The American Dream”. Two versions of the American Dream are mentioned in the play. One is represented by Willy, focused mostly on money which was a way Americans found to show they had the “freedom and liberty” to purchase material goods. The other version is shown through Biff and Ben with their “go West, young man” mythology representing the dream of having the liberty for new adventures. Leticia Hosang

Death of a Salesman Context. (2016, Aug 07). Retrieved from https://studymoose.com/death-of-a-salesman-context-essay 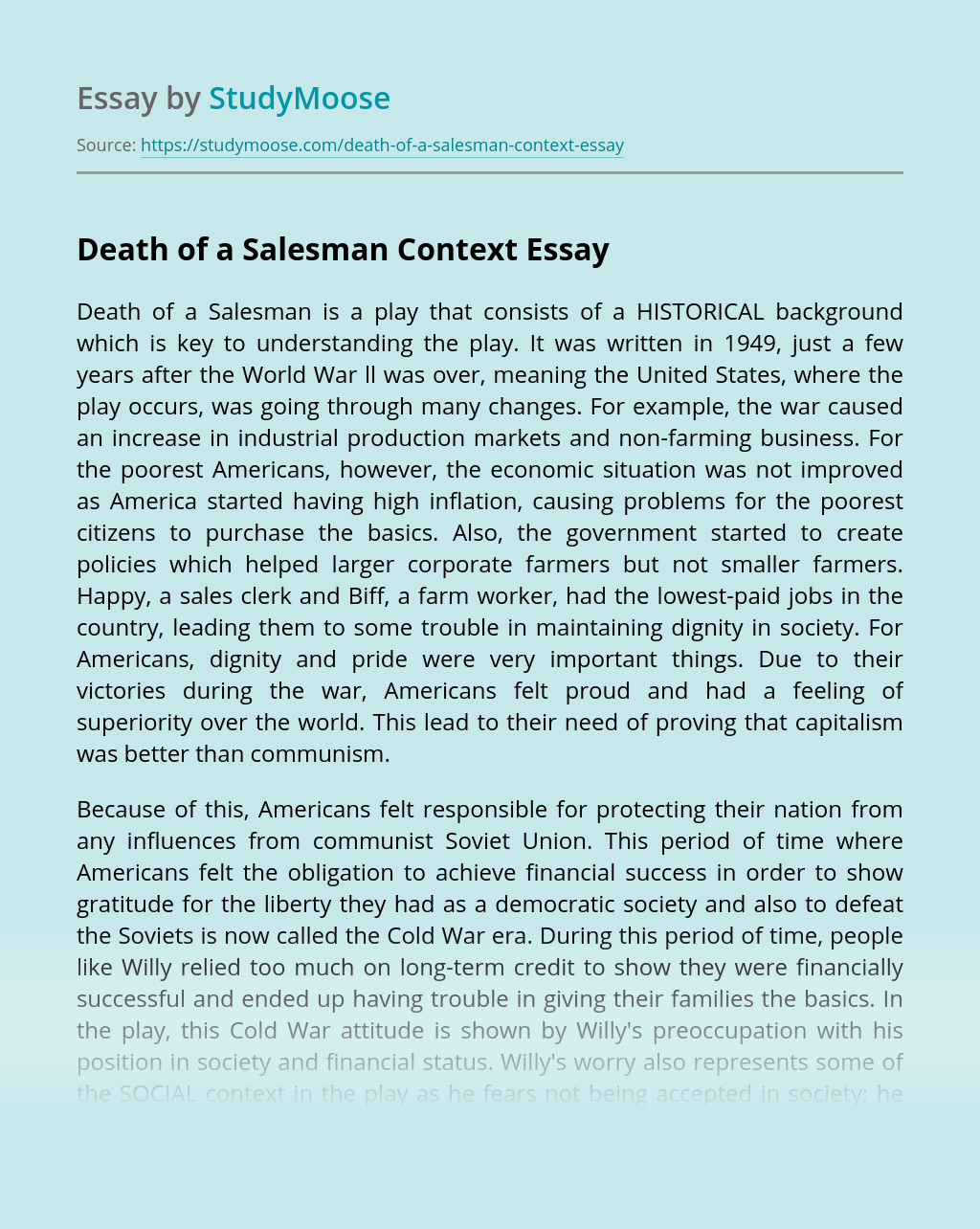 Snowball is a young, smart, good speaker, who is also idealistic. Leon Trotsky is the other leader of the “October Revolution. ” Snowball really wanted to make life better for all while Leon Trotsky was a pure communist and followed Marx. Napoleon was not a good speaker or as clever as Snowball. Joseph Stalin was...

Stanislaw Lem (Polish pronunciation: [sta??iswaf ?l?m] ( listen); 12 September 1921 – 27 March 2006) was a Polish writer of science fiction, philosophy and satire. His books have been translated into 41 languages and have sold over 27 million copies.[2] He is known as the author of the 1961 novel Solaris, which has been made...

Joseph Stalin strategically came into power in communist Russia in the 1930’s. Within just a few years, he turned Russia from a communist state into a totalitarian dictatorship. Few people chose to speak out against Stalin, but those who did were put into Siberian work camps or gulags. Alexander Solzhenitsyn was one of the few...

Throughout Craig Raine’s seventeen-stanza poem several functional devices become apparent with defamiliarisation being the most prominent. Raine also utilises alienation to enable the audience to observe Earth and human behaviour from a Martian’s “alien” point of view. Marxist theories aid in the interpretation of this poem in that Raine suggests that the printing presses rule...

Political System According to Quah as cited in Funston: “Controlled democracy” – “a republic with a parliamentary system of government based on the British Westminster model, but which has been adopted to suit the local conditions”. Three important differences between the Singaporean and British parliamentary systems: (1) Singapore has a written constitution; (2) Singapore has...