The representation of masculinities in "Death of a Salesman"

Death of a Salesman reveals the story of an American man confronting failure in a success-driven society and shows the tragic path which eventually leads to his suicide. Willy Loman believes in what he considers the promise of the American Dream wholeheartedly, which is based on the Declaration of Independence stated by Thomas Jefferson in 1776: “We believe that all men are born with these inalienable rights – life, liberty and the pursuit of happiness.”(Malone, 28)

However, Willy is too caught up in this masculine dream and it does not succeed as he wishes.

Don't use plagiarized sources. Get your custom essay on
“ The representation of masculinities in “Death of a Salesman” ”
Get custom paper
NEW! smart matching with writer

He tries to live up to it and prove himself by working as a successful salesman, but he does not even come close to it. The play examines the cost of blind faith in the American Dream and how a man cannot escape his own pattern of the past. His sons, Biff and Happy, cannot get away from the pattern Willy imposes on them either.

Willy is a character who sets his ideals on the essences of “self-made manhood” and “passionate manhood” described by Rotundo. Although he has been the supporter of the family and is the “head of the household” (Rotundo, 2), he cannot fully exemplify the “communal manhood” phase as suggested by Rotundo.

He pays for the house, the refrigerator, the vacuum cleaner, and puts up ceiling in the living room, without his wife’s financial or physical involvement. But he never really has a respectable place in the community. His boss, Howard Wagner, does not seem to value him and never does him any favor. The kind of “respect, comradeship, and gratitude” (81) Willy describes are not received from Howard, who is forced to fire Willy for his erratic behavior. He thinks that people seem to laugh at him in Hartford and he is “not noticed” (36). Therefore, Willy’s trivial place in society is revealed.

Under the “self-made manhood” phase, “a man took his identity and his social status from his own achievements” (Rotundo, 3) and thus his work role forms the essence of his identity. His fulfillment is constructed in his success in business and professions. Being a sixty year old salesman living in Brooklyn, Willy is a man with powerful strivings and aspirations for success. He believes “selling was the greatest career a man could want” (81) and he does not want Biff to be a carpenter or a cowboy. He is proud of the fact that he used to “average a hundred and seventy dollars a week in the year of 1928” (82) and has been trying all his life to derive personal achievements in work.

He is in constant fear that he will never sell anything again, revealing his value is placed greatly on the success in business. He wants to be a “well liked” and “personally attractive” man in business and convinces himself that “I’m vital in New England” because all these lead to success, wealth and power in society. However, the fact that he does not sell anything and is always rejected by buyers suggests that he is not the successful businessman he says he is after all.

Willy also fits into the “passionate manhood” phase in late 19th and early 20th century because he values bodily qualities a lot. Seeing Ben’s success in the wilderness, he wants his sons to “walk into a jungle” (52) and as suggested by Ben, if Willy will “screw on your fists, you can fight for a fortune up there” (85). He believes “a man who can’t handle tools is not a man” (44), which exemplifies the tough, primitive masculinity that he strongly believes in. He encourages Biff to fight with Ben and asks him to “go to it, go ahead, show him” his physical strength (49). The importance of baseball in the family reveals how the tough body is a “vital component of manhood” (Rotundo, 6). This idea is shown as well when Willy talks about how fat and foolish he looks (37). He wants Biff to wear professionally to discuss business deals, suggesting how physical appearance constitutes a vital role in this phase of manhood.

Willy, a sympathetic salesman and despicable father, has some traits that match Aristotle’s views of a tragic hero. The tragic hero in the classical world is a “mixture of good and bad characteristics”, who is “usually a person of importance who is undone by some personal flaw” (Pucci, 56). He has a “tragic flaw”, that is the cause of his downfall. Without the “distinct moment of epiphany”, and “compulsion to evaluate himself justly” (Pucci, 57), the tragic ending is the consequence of a hero. Traditionally, the tragic hero is a king or queen, someone who has the respect of a whole country. Willy can be seen as a modern tragic hero.

He is a good man who tries to take care of the family, but his faulty personality, the financial struggles, and his inability are substantial flaws that contribute to his failure and tragic end. His problem is that he completely accepts the values of his society that he judges himself by standards rooted in social myths, such as the myth of a perfect, money-making salesman. He has a series of ups and downs which is close to the tragic figure. He is an aging salesman who sells nothing, and repeatedly borrows money from Charley to pay for household installments. It is hard to tell if Willy finally learns his lesson. He seems to be unable to face the miserable reality of life. If there is such a lack of insight, it will be strikingly similar to traits of the tragic hero.

Biff is a man who shows essences of the “passionate manhood”. He is a “well built” man who likes to “raise cattle, use our muscles” (23), and when getting ready for baseball games, he says “every muscle is ready” (88). When he is angry, he “could have torn the walls down” (104). He has been introduced by Willy to competition and hardy games at a young age. As Willy suggests it, Biff is like young god Hercules. According to The Columbia Encyclopedia, this most popular of all Greek heroes is famous for extraordinary strength and courage. He was the son of Zeus and Iphicles and incurred the everlasting wrath of Hera because he was the child of her unfaithful husband.

A few months after his birth Hera set two snakes in his cradle, but the extraordinary infant promptly strangled them. Hercules was involved in many other adventures and combats as well. In this Attic vase, Hercules is portrayed as a powerful, muscular man combating a lion from the wilderness. Therefore, associating Biff with this Greek figure illustrates how the primitive masculinity is found in him.

Biff longs for the West, which is obscured by his father’s blind faith in a twisted, materialist version of the American Dream. After his epiphany in Bill Oliver’s office, Biff determines to break through the lies surrounding the Loman family. He wants to come to realistic terms with his own identity. He announces that he is only a shipping clerk and he realizes that he has never been a real salesman. Biff’s identity revelation intends to reveal the simple and humble truth behind Willy’s fantasy. Both of them face disillusionment, reflecting Pleck’s notion of the son being “regarded as extensions of their fathers” (Kimmel, 85).

But Biff does a better job in acknowledging his failure and eventually manages to confront it. Willy is the “Father as Moral Overseer” (Kimmel, 84) in the play as he constantly tries to put Biff on the right track. He gets mad at the end because Biff has stolen Bill Oliver’s fountain pen, trying to “restrain the children’s sinful urges and encourage the development of sound reason”.

Early in the play, Happy tells Willy that he’s going to lose weight. Later in the play, this changes to “I’m gonna get married.” Why does Happy constantly interrupt conversations with either of these lines, and what does this mean to the play? How has Willy treated Happy all of his life? How has this affected Happy? Is Happy another Willy?

Malone, Dumas. The Story of the Declaration of Independence; Jefferson the Virginian. New York: Glier Corporation, 1982. 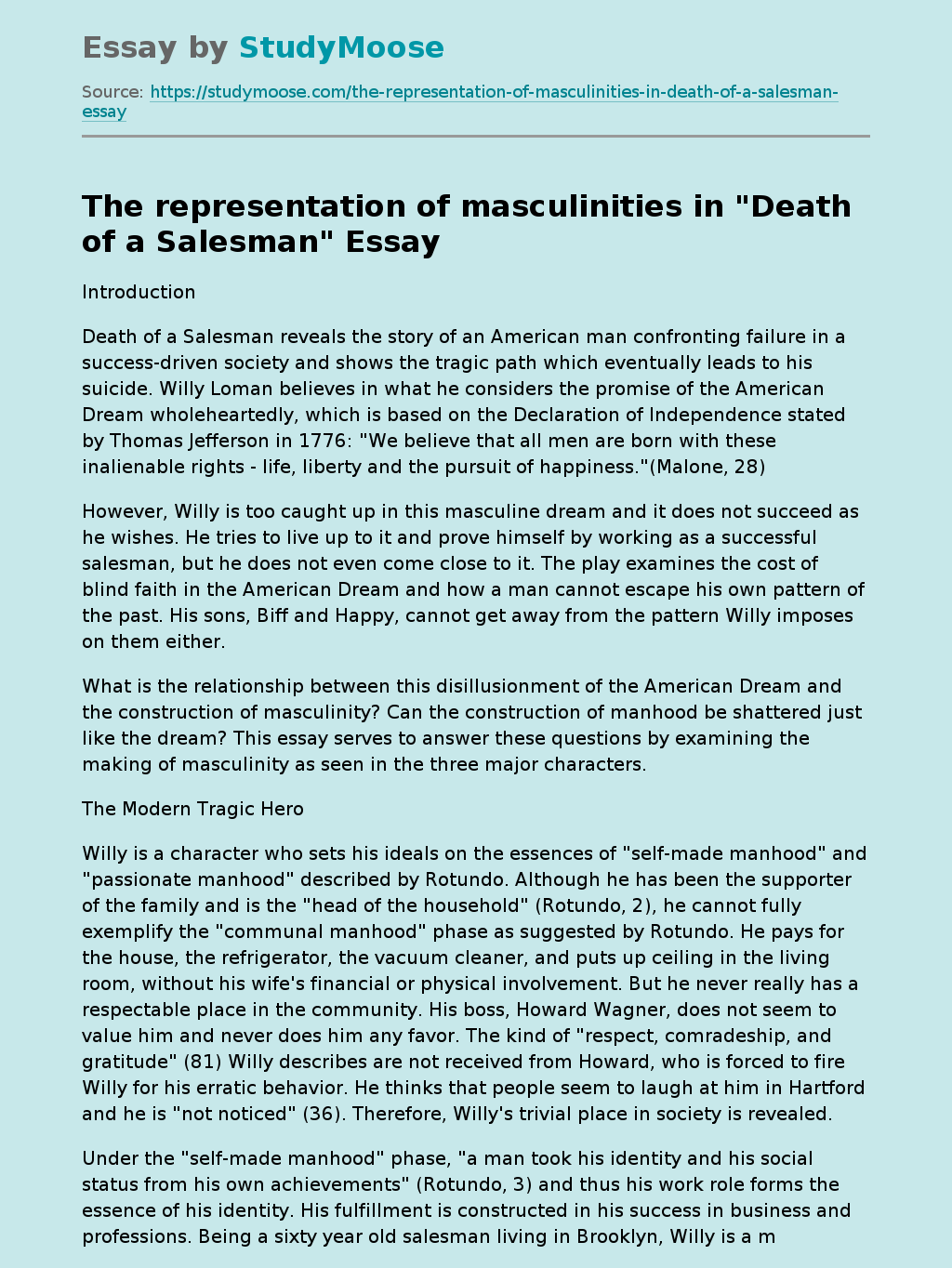