The Causes of World War II

In the book The Best War Ever: America and World War II by Michael C.C. Adams, Adams discusses the misconceptions about world war two that America had and still has today. Through the title, one can assume that Americans came out of the five year war with a positive view. This was due to the way theatre and television portrayed it to the public, and like naïve children America ate it up.

Don't use plagiarized sources. Get your custom essay on
“ Best War Ever ”
Get custom paper
NEW! smart matching with writer

Television and other media didn’t want America to see the true horror that actually took place overseas, but what they didn’t know was how mislead America was going to become. This essay will discuss the argument Adams creates in chapter 6 about how sugar coating the war for America, was in a sense best for them, but for small businesses, immigrants and teens it was a different story. Before World War II became the center of attention in America, people lived their everyday lives.

Most were small business owners that were just trying to make a living.

As the war went on overseas, Pearl Harbor was attacked, which led to the U.S. joining the war. Do to this sudden need to protect our country, America became “obsessed” and young men volunteered to fight for the country they loved. Everyone including women and children had this attitude of supporting the troops and doing everything they could to help out, by women working jobs in factories that were originally created for men.

As these factories like Ford, Coca-Cola, and Wrigley’s grew, “World War II undermined the world of the small producer in business and agriculture, completing the triumph of large corporations…” (The Best War Ever: America and World War II, 1994)1. Small businesses closing down wasn’t the only cause of America joining the war but also, families losing their homes, farms, towns, and well basically their lives. These people had to move to bigger cities where factories that were being recognized, due to the war, were the only jobs available. While factories grew, violence towards immigrants grew as well. Due to Pearl Harbor being attacked by the Japanese, Japanese-Americans were seen as a threat and removed from their homes and put into detention centers. “More than two-thirds of the Japanese who were interned in the spring of 1942 were citizens of the United States.” (Japanese Relocation Centers: During World War II, nearly 120,000 Japanese Americans were under lock and key, 2007)2.

President Roosevelt felt that they were a threat to America and that anyone of them could be a spy. African-Americans were facing hard times as well, though racism was still going strong, many African-Americans were being attacked and miss treated because of mixed work environments as Adams states in his book (1994) “A white man in a wildcat strike at a Packard plant said ‘I’d rather see Hitler and Hirohito win the war than work beside a nigger on the assembly line.’”3 Wives of African-American men in the army were also treated as lower class while the American women would get preferred treatment. Another race that was targeted were American-born Hispanics. Teen Hispanics began to form gangs and “challeng[e] the traditional restraints of their behavior”. They did this by wearing zoot Suits. Because of this new fashion trend amongst Hispanics, military men began to harass and ended up creating a riot known as the “Zoot Suit Riot”. In this riot military and Hispanic men attacked each other but only the Hispanic teens got arrested for the violence. As immigrants were mistreated, young American teens were feeling a sense of freedom, this was due to the lack of parental control. “More girls got pregnant. And the venereal disease rate rose : between 194 and 1944, New York City’s VD rate among girls aged fifteen to eighteen years old increased 204 percent.” (The Best War Ever: America and World War II, 1994)4.

Teens were getting into trouble cutting school and joining gangs. It was hard for schools to maintain a strong education among the youth and so a decline in intellectual quality began in young Americans. Media also had a small part to play in this lack of education. Mass entertainment was trying to win over the youth through T.V. and movies and because of this the armed services saw that students in this generation weren’t as prepared as generations before them, they lacked skills learned in high school. But one reason that as a main factor were the number of jobs that were available. Teens were able to get a job as young as thirteen years old, even though the job wasn’t helping out the war, money made the youth feel free like they could do anything they wanted, which they did. In conclusion, World War II in a sense was the best war ever but for small businesses, immigrants and teens, it was a war that ended up changing tradition into trends and violence. Americans were blinded and lied to and through this it brought grave consequences . “… it is the danger of arrogance and hubris – that is, the danger of going to war because a nation’s leaders are convinced of their own righteousness, or have persuaded themselves and the public that a foreign country should be attacked because its government or society is not merely alien, hostile or threatening, but “evil.”(The ‘Good War’ Myth of World War Two, 2008)5. 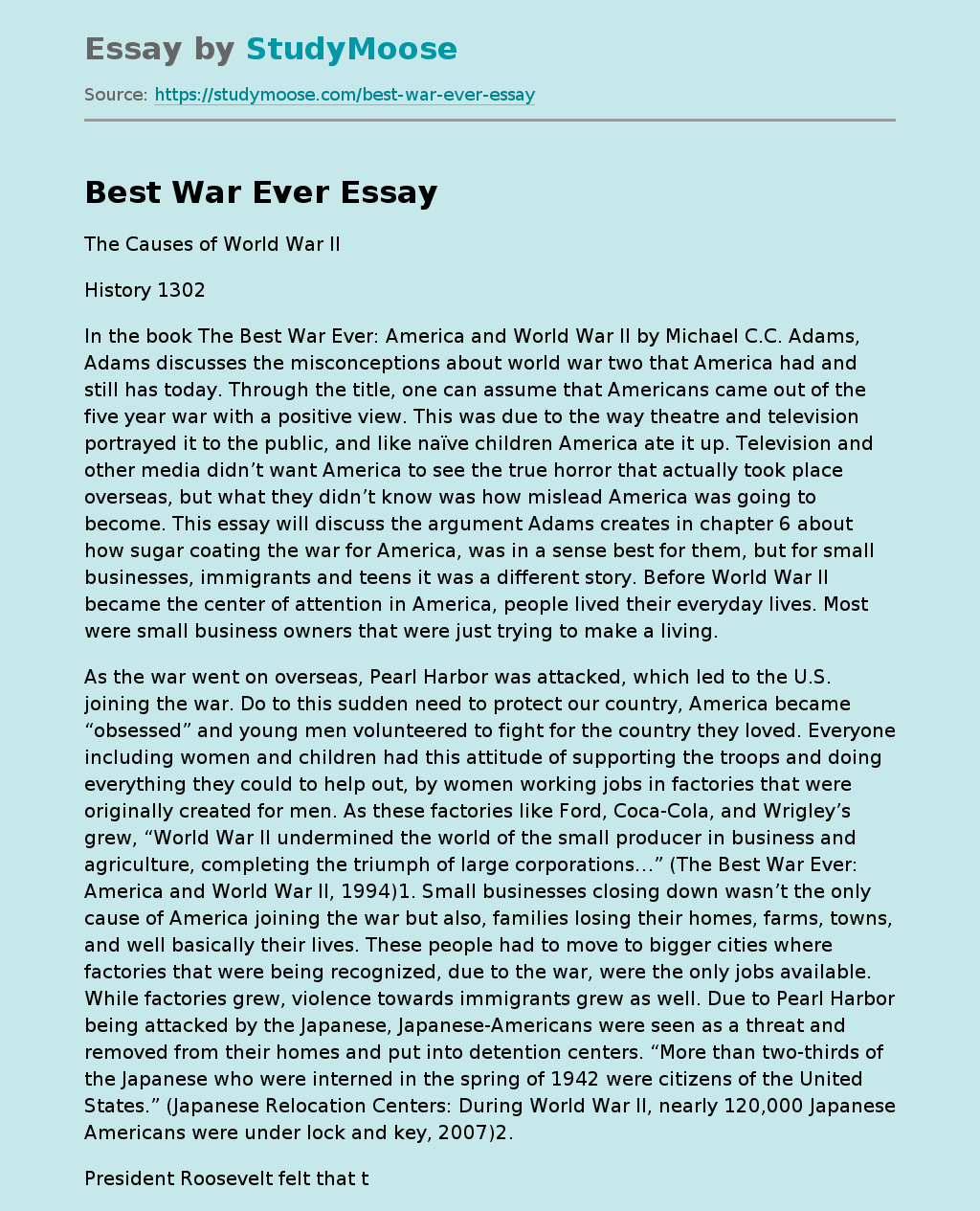