Interview with someone who lived during WWII

Answer: He was not involved in the war because he was too young. However, his father worked as an electric engineer for the army and operated radars. He had two uncles who were also in the army and had another uncle in the navy.

Answer: He was in the boy scouts and was extremely patriotic.

Don't use plagiarized sources. Get your custom essay on
“ Interview with someone who lived during WWII ”
Get custom paper
NEW! smart matching with writer

He collected scraps of aluminum, steel, iron, and paper for the war effort. He did not see this job as a burden and even competed for respect by trying to collect the most materials. He was also a coastal watcher and was assigned to watch for enemy submarines along the eastern coast. However, he never actually saw one.

Answer: He became a casualty-reporting officer in 1957 when he was stationed in Alaska.

Before then, he was generally pro-war, but after telling two or three wives that their husbands were dead, he became more passive. He said his job as a casualty-reporting officer changed his view towards war and caused him to question the Vietnam War and the policies of President Bush.

4.Question: How did you view the war then?

Answer: During the time of the war, he was nonchalant to the war. In fact, he said the worst part about the attack on Pearl Harbor was that he could not go to the beach on that day.

As a child, he did not understand much about the war. For example, he said that when he learned about the Pearl Harbor invasion, he asked himself “what’s a Pearl Harbor?” and when he read about the dropping of the atomic bomb on Nagasaki and Hiroshima, he asked himself “what’s an atomic bomb?” He viewed the war as a game, because he never experienced any major losses. He thought that there was no way the United States could lose and never worried for one second.

5.Question: How did you view military or political leaders during World War II?

Answer: He admits that most of his opinions concerning them were affected by his father’s views and by movies, which he labels as propaganda. For example, he hated Himmler, Goebbels, Hitler, Goering, and Tojo because movies portrayed them as villains. He disliked Franklin D. Roosevelt because of his farm policies, which forced farmers to kill pigs in order to drive pork prices higher. He liked Churchill and idolized Dwight D. Eisenhower.

6.Question: Who do you feel was responsible for the war?

Answer: He said the French were responsible for World War II because they created unfavorable and impossible situations for the Germans with their reparation system. He said that Hitler would never have risen into power if France had not burdened the German economy so heavily. He also felt that Japan was responsible for the war in the east, but the United States could have prevented the war from escalating by lifting its embargo on Japanese products.

7.Question: Did you suffer any deprivations because of the war?

Answer: During World War II, Bill’s father worked with radars as an electrical engineer and was sent oversees to North Africa in 1943. Bill missed his father after he was called off to duty. Other than that, he suffered no other deprivations.

8.Question: Do you have any comments about rationing?

9.Question: What were you doing when you first heard the news of Pearl Harbor?

Answer: He was getting ready to go to the beach in Florida when he received a phone call from his father saying that Pearl Harbor had been attacked. His dad had to go directly to Pearl Harbor but he was just saddened that he could not go to the beach. It was not until several days later did he find out the severity of the situation when he saw a movie clarifying the Pearl Harbor attack.

10.Question: Did you know about the Nisei camps?

Answer: No, like most Americans, he did not know about the Nisei camps until after the war had ended. At the University of Illinois, he had a close Japanese friend, ***** *********, who lived in a Nisei camp during World War II. Yukio was eleven years old when he was driven out of his home and sent into a Nisei camp. Yukio told Bill that there was plenty of food in the Nisei camp. The only bad memory he had of the camp was the giant fence that he was not allowed to cross in order to get his soccer ball. After Yukio’s family was released from the Nisei camp, they moved to Chicago to escape the bad memories that remained present in the west coast.

11.Question: How were Jewish refugees received in America? Were the welcomed?

Answer: Bill said that as a child, he knew very little about the immigration laws for the Japanese and the Jewish. However, he distinctively remembered many restaurants and hotels hanging signs that read: “no Jews allowed”. He said that he always felt sympathetic towards the Jews because he had a close Jewish friend during the war.

12.Question: How were African Americans treated during the war?

13.Question: Was the war discussed in school?

Answer: He said that kids usually talked about the war during school, but their teachers abstained from discussions about the war. Even in history class, teachers refused to discuss “current events” because they felt that the kids were too young to learn about the war. However, the children were allowed to sing patriotic songs for almost an hour every day.

I think that Bill answered my questions without any bias or prejudice. He is currently taking many history courses at ******** so his historical knowledge is very accurate. His answers are impartial because he likes to view the war from different viewpoints. He told me that one must study World War II not only from the side of the Allies, but must gain the perspective of the Axis. During our interview, he constantly got off the subject and started lecturing me about the history of World War II. In fact, he brought several of his college textbooks and used his books to prove whatever point he was trying to make. Initially, after he told me about the syphilis experimental testing that the United States military administered on African Americans, I was reluctant to believe him (though I never showed any skepticism). However, he took out one of his textbooks, showed me the article on the Tuskegee experimental testing, and immediately gained my complete trust and confidence.

Both his historical knowledge of World War II and his short-term (and probably long-term) memory are very accurate. I trust that the answers he gave concerning his childhood are also very accurate. Another reason that I think he was not biased in answering my questions was that he answered every one of them. He never tried to avoid any specific questions. Also, none of his relatives was injured or killed because of the war so it is unlikely for him to hold a grudge against the Germans or the Japanese. However, one of the adverse effects of being too impartial is that he is unable to formulate any of his own opinions.

I learned many things about life during World War II from Bill. For example, I learned that kids during that era were pro-war and very patriotic. This may have resulted from movies that were designed for propaganda. At that time, everyone went to the movies at least once a week, which may have greatly contributed to patriotism and to the war effort. I also learned that many children were active in collecting scraps of aluminum, steel, iron, or paper for the war effort. I do not know if these scraps actually helped build a lot of planes and ships, because it is foolish to think that there was that much scraps lying on the ground for the kids to collect, but it probably did get everyone involved and committed to the war effort.

In addition, I learned that few Americans knew about the Nisei camps or the German concentration camps during World War II. It was not revealed to the public until after the war ended. Immigration laws were not widely publicized during the war either. I learned that rationing in the United States was not too awful and that no one starved or went hungry because of it. In fact, many felt that rationing was a major step up from the hunger caused by the Great Depression. Finally, I learned that some African Americans were the subjects of experimental testing during World War II. How can Americans shamelessly condemn Hitler’s experimental testing on the Jews when they are committing the same crime?

Interview with someone who lived during WWII. (2016, Jun 28). Retrieved from https://studymoose.com/interview-with-someone-who-lived-during-wwii-essay 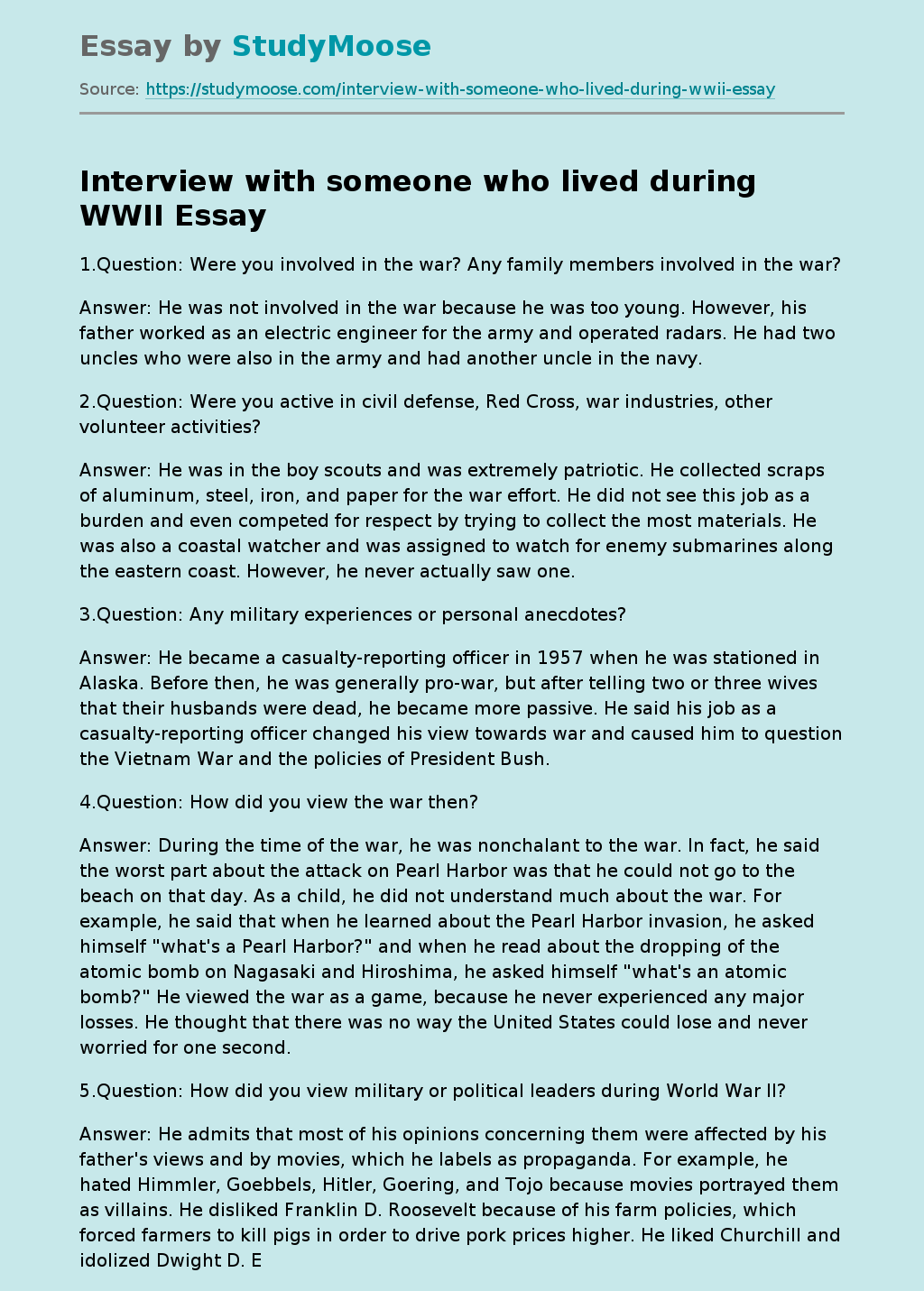