“The execution of Louis XVI marked the beginning of the 18 month period of the French Revolution that has come to be called ‘The Reign of Terror’”(49). It was led by no other than Robespierre, in an attempt to start a new government, which proceeded to execute large numbers of people. The 18 months was a blood pouring event during the French Revolution. These events were unnecessary and the whole Reign of Terror was unjustified because it was a sin to kill, they went against what other through and what was right, and they went beyond what was necessary.

Don't use plagiarized sources. Get your custom essay on
“ DBQ: Reign of Terror ”
Get custom paper
NEW! smart matching with writer

Not only was the Reign of Terror a big part of the French Revolution but it was a very unjustified event, creating sins among the people. They treated the dead as heads and bodies of simple animals rather than thinking of them as once humans. “Carried it mockingly, upside down on a cart, offering it to passers-by to spit on”(59). The people then went against the churches abolishing holidays which were important to many people and their beliefs.

Proficient in: The Reign Of Terror

They also killed thousands, “many of these people were guillotined”(63). They would cut the heads of criminals and even innocent without trial. The guillotine began very popular through these months, becoming the number one way of killing. “The guillotine became one of the most powerful symbols of the French Revolution… It had a sharp, angled blade, which dropped quickly on a guided track”(65). These months were very gruesome for the people of france and many families, to where no one felt safe.

These murders were sins, killed without reason or trial making the Reign of Terror unjustified.

They were also unjustified because they were out of control and gave no trial to those who were sent to death. “The tribunal followed a formalized legal procedure, but gradually broke down “(63). They soon after gave in and stopped following their word, stopping all the trials. “The tribunal were out of control and kill thousands of innocents and accused men and women”(63). These deaths soon became a public view to anyone to witness, a view no one could forget, yet something to celebrate. “The public guillotines were memorable events… laughing and chatting familiarly as if they were at a festival”(65) The people screamed of joy once the Kings blood poured from his headless body for they had finally killed him off. Louis XVI was killed for the unjustified killing of many without a fair or given trial. The unjustification also included the Reign of Terror causing an unnecessary amount of deaths and beyond what was called for.

People dropping without trial, without justification why at some points. “historians estimate that between 20000 and 40000 people were killed by the guillotine during the Reign of Terror”(65). The Committee soon hired many to spy making the areas hard to be trusted, they were always searching for if they were being watched. “a careless word of criticism spoken against the government could put on in prison or worse”(63). This made no one safe from imprisonment or death, this was unnecessary, against what we now have the right to speech. This was beyond what was needed or called for these people were killed over an unjustified event, just if they were in the wrong place at the wrong time.

This shows how the Reign of Terror was unjustified and brutally unfair to the people of the times. Thousands killed without trial but guillotine decapitating them. “In mid- 1794 the Reign of Terror came to a rather abrupt end. Robespierre himself was executed and a more conservative government was put in place”(49). These times ruined families and homes across france, killing innocent men without trying them on trial in front of a fair jury. These 18 months became the bloodiest months of the French Revolution creating a huge impact on our history and government now showing how unjustified it was. The Reign of Terror was a against sin, unnecessary, and went beyond limits. 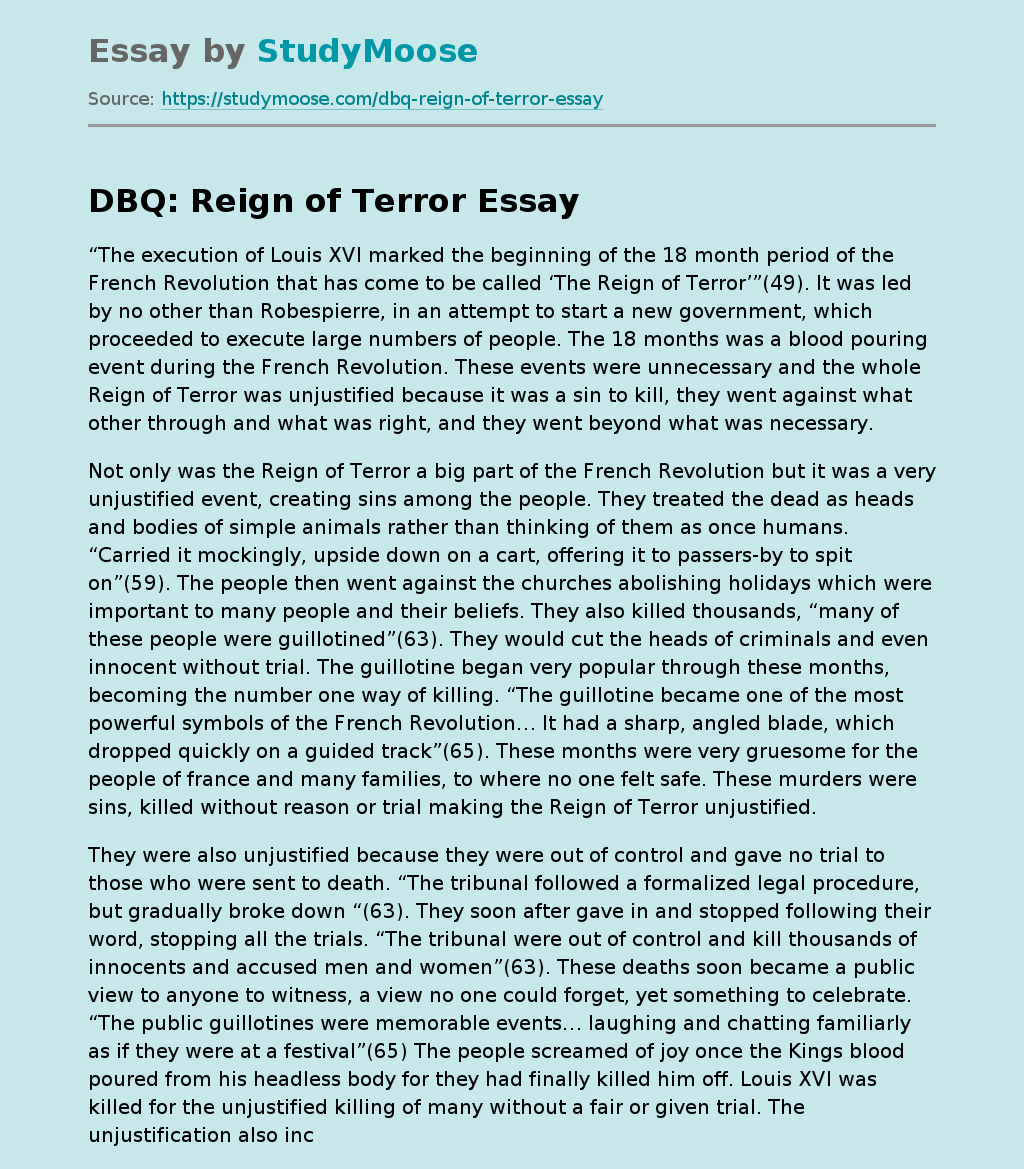