Over the course of the seventeenth- and mid-eighteenth-century a wide variety of groups and individuals have sailed across the Atlantic and settled in America. Settling in this new environment was most certainly hard, but as time passed America transformed into a more complex civilization and so too did its identity and unity. Still ruled under Great Britain the colonists were able to create a unique identity and partial sense of unity as time progressed. The colonists had a full sense of their identity being the egalitarian, self-reliant people that they were, but lacked complete unity, still indecisive about breaking away from their mother country by the eve of the Revolution.

Don't use plagiarized sources. Get your custom essay on
“ DBQ-American identity and unity ”
Get custom paper
NEW! smart matching with writer

A great deal of the colonists’ identity is ascribed to the environmental factors which shaped their attitudes and beliefs.

The egalitarian and self-reliant characteristics of the colonists were long instilled into American culture. Egalitarianism was due to the abundance of land that provided anybody with a chance of land ownership. Ordinary people could now vote in the colonies, a privilege most didn’t bear in England, and because of the large amount of people with land ownership, the colonists formed less distinctive social classes among themselves.

Also, not being given many supplies to start off with the colonists had to create their communities mostly from scratch, which in return created very self-reliant and self-sufficient communities that played a key role in their freedom from Great Britain. Moreover, the expansive environment inspired many people to start fresh in their lives.

The opportunity that America possessed led not only Englishmen to settle but varying cultures from all around.

St. John Crevecoeur Hector says in Letter from an American Farmer, “What then is the American, this new man? He is either an European, or the descendant of an European, hence that strange mixture of blood which you will find in no other country…He is an American, who leaving behind him all his ancient prejudices and manners, receives new ones from the new mode of life he has embraced.”

The different political perspective between the colonies and Great Britain had also enlarged the colonists’ own sense of identity. In the Declaration for the Causes of Taking up Arms written by the Continental Congress, colonists want their old relationship back from Britain by saying, “We assure them that we mean not to dissolve that union which has so long and so happily subsisted between us, and which we sincerely wish to see restored…”

This shows how their unity as a colony was increasing, but at the same time portrays the different stance on government each group had. In this case the colonists wanted to return to the old days when charters and privileges of Americans were written in stone and not ruled by Parliamentary sovereignty, which took them by surprise. This surprise did however reveal the differences in each group’s view of where the power laid and later caused Edmund Burke to say, “Govern America [?] as you govern an English town which happens not to be represented in Parliament[?] Are Gentlemen really serious when they propose this? Is there a single Trait of Resemblance between those few Towns”, identifying the colonists’ view on policies distinctly different than that of England.

Even though the colonists did manage to successfully revolt against the greatest power in the world, they were not completely united before the eve of Revolution. Evidence of their unity however was apparent. Richard Henry Lee says in 1774 to Arthur Lee, “A very small corrupted Junto in New York excepted, all N. America is now most firmly united and as firmly resolved to defend their liberties ad infinitum against every power on Earth that may attempt to take them away.” Then later goes on to describe how the Association, which was a movement of boycotting British goods, is the most effective measures being taken by the colonies. These boycotts as well as other protest of British commerce gave the radicals of society much unity.

Also there’s evidence of the colonists’ ability to unite by helping the relief of Boston in 1774 and 1775 when it underwent the punishment of the Coercive Acts (Doc G). It was given donations all the way from South Carolina and North Carolina to help aid the Bostonians showing support not only by those colonies close to Massachusetts. The colonists were not completely united though. Cotton Mather, a Great Awakening leader suggests, “They call me a brainless Tory; but tell me, my young friend, which is better, to be ruled by one tyrant three thousand miles away, or by three thousand tyrants not a mile away.” Loyalists like Cotton Mather had still been obvious by the eve of the Revolution.

“The Origin and Progress of the American Revolution to the year 1776” advocates that the weak minded people were being taken advantage of by Revolutionary leaders in the ‘Arts of Deception’ (Doc F). Loyalists stood by the traditional methods of their mother country, but weren’t as publicly apparent, fearing ridicule by those who have been led to think that the Loyalists were evil. These people, as well as neutralists, restrained from a Revolution. 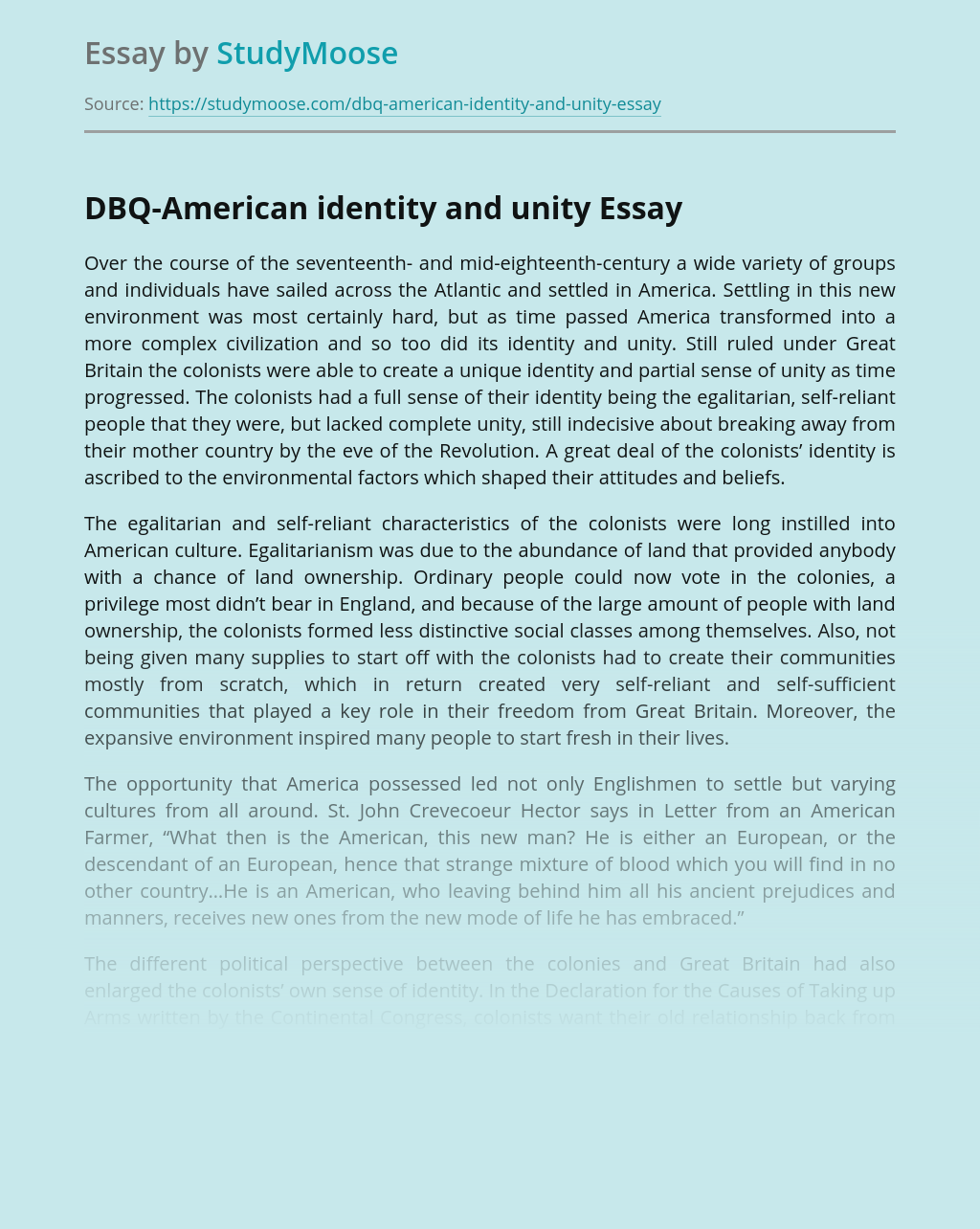