The article, “Cyberbullying and Self-Esteem”, was written by Justin Patchin and Sameer Hinduja at Florida Atlantic University and published in the Journal of School Health in 2010. The article described the methods and procedure used to examine the relationship between middle school students’ experience with cyberbullying and their levels of self-esteem.

The goal of this study was to explore the extent to which cyberbullying is associated with low self-esteem (Patchin and Hinduja, 2010). At minimum, this study discovered that adolescents who experienced bullying over the internet, cell phone, or any other technology had significantly lower self-esteem than those who had little or no cyberbullying experience.

Don't use plagiarized sources. Get your custom essay on
“ Cyberbullying and Self-Esteem ”
Get custom paper
NEW! smart matching with writer

The study utilized a random selection of 1963 middle school students from 30 schools. These schools were located in one of the largest school districts in the United States. These students ranged from sixth to eighth grade. A self-report survey of internet usage and cyberbullying experiences was administered to these students by teachers in their classes. Students that were enrolled in a district-wide peer conflict class were chosen to participate in the study.

All sixth-eighth graders are required to take the district-wide peer conflict class at some point while in middle school. Passive consent was obtained from the parents and/or guardians of each student by letters that were sent home to each parent/guardian explaining the procedure and purpose. Those who wished to have their children not participate in the study indicated their preference on the form. Rosenberg’s (1965) validated measure of self-esteem scale was utilized to estimate the students’ levels of self-esteem. The scale included a variety of questions with responses ranging from strongly disagree (1) to strongly agree (4) (Patchin and Hinduja, 2010). Statistical analyses were obtained using SPSS. The analysis revealed a statistically significant relationship between both cyberbullying victimization and offending and self-esteem. To be more specific, cyberbullying victimization and offenders both had extremely lower self-esteem than those who had not been victims of cyberbullying. Results also showed that the relationship between cyberbullying victimization and self-esteem is stronger than that of cyberbullying offending and self-esteem. The most commonly reported form of cyberbullying was posting comments on social media about someone to gain laughter from others. Fewer respondents admitted to sending text messages or e-mails (Patchin and Hinduja, 2010). Previous studies have exposed the light on the negative emotional and psychological effects of cyberbullying, however, this research is important as well because it is the first to isolate low self-esteem as a potential outcome. This study also presents evidence that technological forms of youth aggression require the attention of teachers, parents, and other youth-servicing adults (Patchin and Hinduja, 2010). 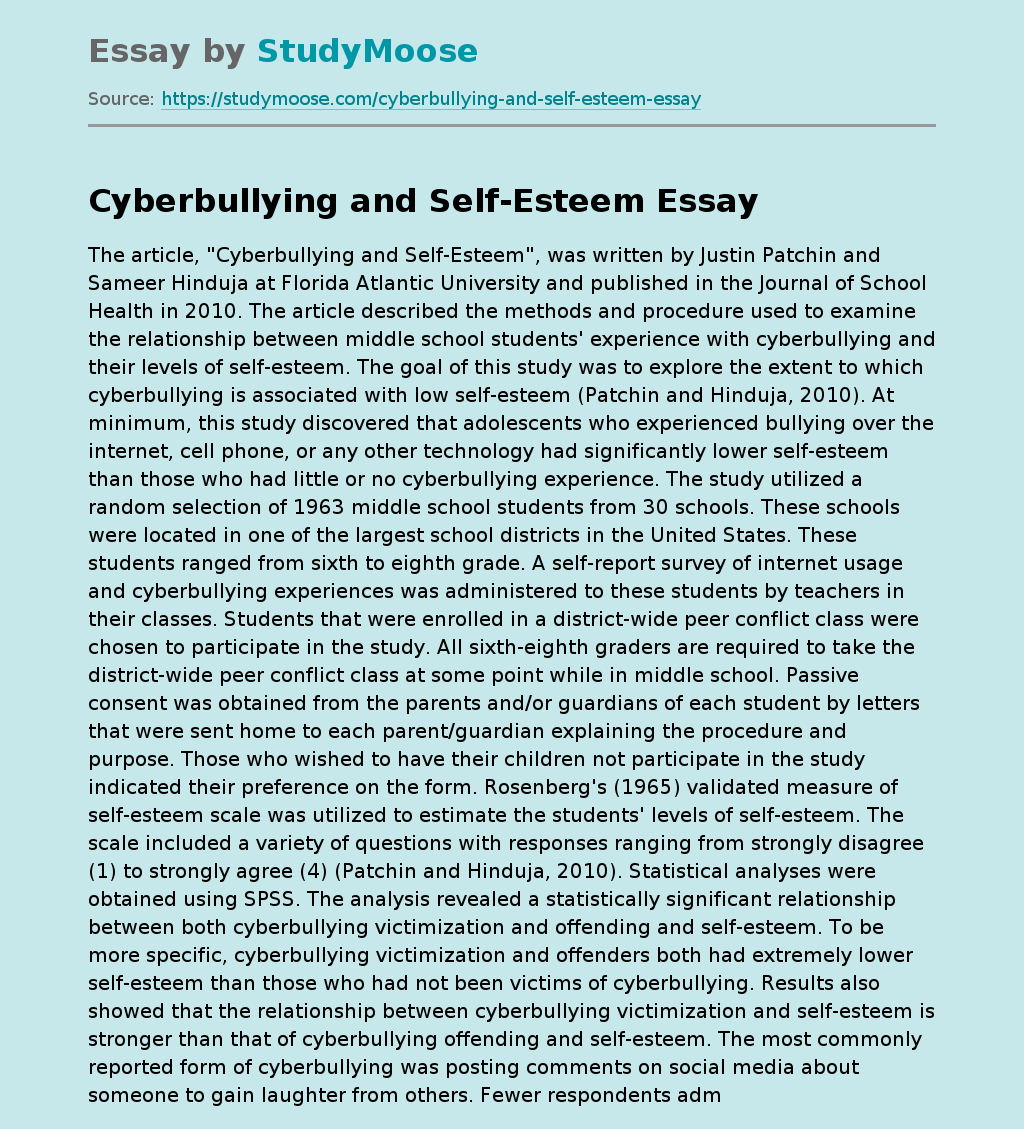