The issue that is huge in the criminal justice system right now is prison overcrowding. The reason why it is an issue is that it is not meeting the need of the inmate’s human rights need such as health care, food, and accommodation that the prison has to provide for the inmates to be there why they are servicing their sentence. The other issue why overcrowding in prison is an issue is because of the drugs that go and out of the prison system if you have two many inmates in prison then you know that drugs are going to get into the prison some way and then you have to figure out who is bringing drugs into your prison and you know the inmates are not going to talk because they want to call out for being a rat in prison.

Don't use plagiarized sources. Get your custom essay on
“ Current Situation of Prison Overcrowding ”
Get custom paper
NEW! smart matching with writer

With the data that I have seen, there is about 115 prison around the county that have over exceed the number of inmates that you can in the prisoner this mean that the program that the prison is offering the inmates are not getting done or providing because the prison doesn’t have the extra money in the budget to have them in the prison and that can become a problem because these program like rehabilitation programs, educational and vocational training, and recreational activities can help out the inmates in the long run when they get out of the prison they can have a plan line up to help them so they end up back in the prison system.

The overcrowding issue in the prison can also lead to a lot of problems in the prison such as lack of privacy, can also cause or exacerbate mental health problems, and increase rates of violence, self-harm, and suicide for the inmates too.

“The data supplied by the Bureau of Justice Statistics revealed that the federal prison system had the highest rate of overcrowding in 2004 (140%), but this was only because states such as Alabama, California, Delaware, and Illinois housed a significant portion of their inmate populations in private and contract facilities. Local and county jails held 747,529 offenders in mid-2005, which represents approximately one-third of the incarcerated population. These facilities were at 95% capacity, although this figure is deceptive because research indicates that smaller jails often operate well below their rated capacity, whereas larger metropolitan jails often operate well above their rated capacity”. (“Prison Overcrowding (Forensic Psychology) IResearchNet”)

The reason why the prison is being overcrowded in the prison today is that the inmates exceed the spatial and social capacity in the correctional institutions and the prison system to incarnation the inmates but the other issue is that most people want to see the person who has violated the society go to prison for the actions that they have done. The politicians wish that the public will demand that the person would get a greater punishment or a long sentence in the prison system because they don’t want to look weak to other people so they want to show an example of the title that they are holding. But in the long run, the legislation that provides for mandatory, determinate, or longer sentences; reduces good-conduct time credit, and restricts or eliminates early-release programs such as parole so we don’t have an issue with the overcrowding in the prison system. 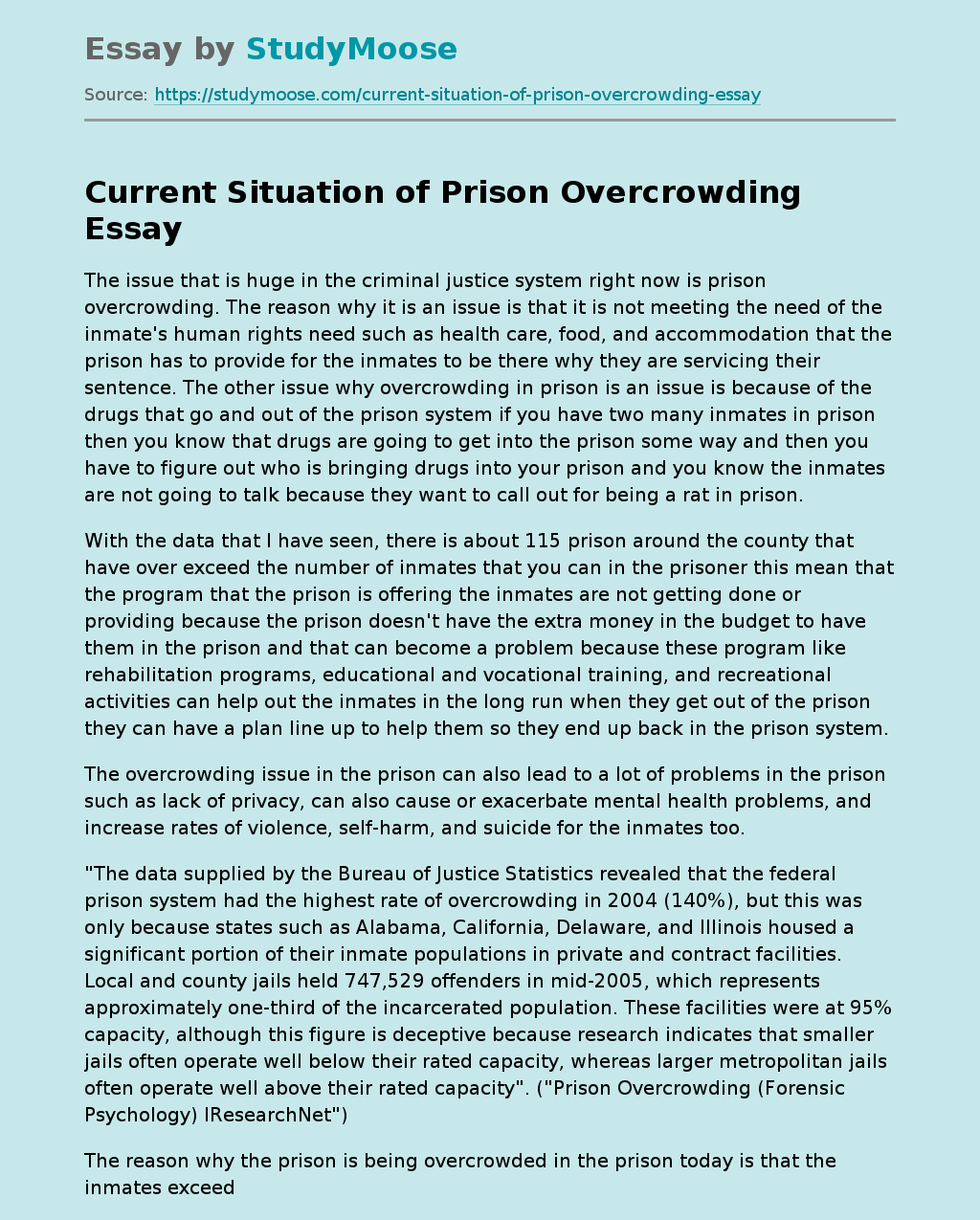