Culture and politics: An interesting concept, the idea of culture is hard to define. What exactly is culture? How does it affect us? In J. Harry Wray’s book Sense and Nonsense: American Culture and Politics, he says culture is “a shared symbol system, linking members of a group to each other and to history, thus providing them with an identity.” What this means is that culture is how different groups respond to and interpret symbols. As examples Wray talks about a aboriginal tribe in Malaysia who believe that thunder storms are the result of human violations of the natural order of things, whereas we see thunder storms as the mixing of a hot air mass colliding with a cooler one in the presence of certain conditions.

Don't use plagiarized sources.
Get Your Custom Essay on Culture and Politics Just from $13,9/Page

Now that I’ve tried to define culture I want to try to show its importance. By defining culture as the way a collected group of people interpret symbols one must try to give an example of these symbols.

Cultural symbols are essentially anything that is thought of as unique to a group people; however, it really could be anything such as a house, car, clothes, but also street signs, telephones, television, and radio. These cultural “symbols” are everywhere and usually we aren’t even aware that they are symbols of and to our culture.

Since culture is the way we interpret these symbols, it is very important to realize that these symbols will affect our culture and moreover they will affect our politics. The ways our symbols will affect our politics are that they can change our perspectives and ideas about our communities and the world around us. Symbols in culture often affect politics and how government works, an example that Wray gives is the importance of family. In the U.S. family is stressed by almost every politician seeking office, however the Family Leave Bill took years to be voted into law. This controversial bill would allow a parent of a new born to take up to sixteen weeks of leave, without pay, without worrying about being fired.

In Sweden, however, there were already different options for new parents. New parents there have the options of either parent taking up to a year off, with eighty percent of pay, or they can reduce their workload to five hours over the first few years of early childhood at full pay. It makes me wonder why, in a society that is so focused on family that it took years to pass a bill that only gives one option and only to people who work for big businesses and in Sweden there were already at least two options.

Another aspect of culture and politics is through multiculturalism. We generally think of society as a melting pot, but this really doesn’t explain multiculturalism well. Wray suggests that we think of our society as a mosaic, where different tiles represent different groups of people. This is a pretty good representation, but it is hard to decide how to split people up into different tiles. As more and more people come to the U.S. they change the society and may not fit into a tile that already exists. This shows how hard it is to actually define multiculturalism. Wray also suggests that we think of society as a cooking pot. As something is added to the stew it becomes part of the stew, sometimes it can even be completely dissolved onto the stew, but it can still be tasted.

One way multiculturalism affects us is that it makes us more sensitive to differing views. In a society where there are people from different cultures you have to be able to listen to and make judgments for these people. In a society like ours you have to try to do what is good for everyone and that is hard when there are many cultures mixed together. Another way culture is affected is that you have different symbols to interpret and you will have different ways of interpreting these symbols. This will cause you to be sensitive to the views of others because you don’t know how symbols will be interpreted by other people therefore you have to think about how to make your ideas universal.

In the end we see that culture is very important in our society and that it is very important to politics. Culture is present everywhere and sometimes we don’t even realize how it affects us. We also see that culture is very hard to define because there are so many different ways to look at culture, you can think of culture as symbols, or the way people live, or the native art or music. Whatever you think, culture is probably one of the most important influences on politics. 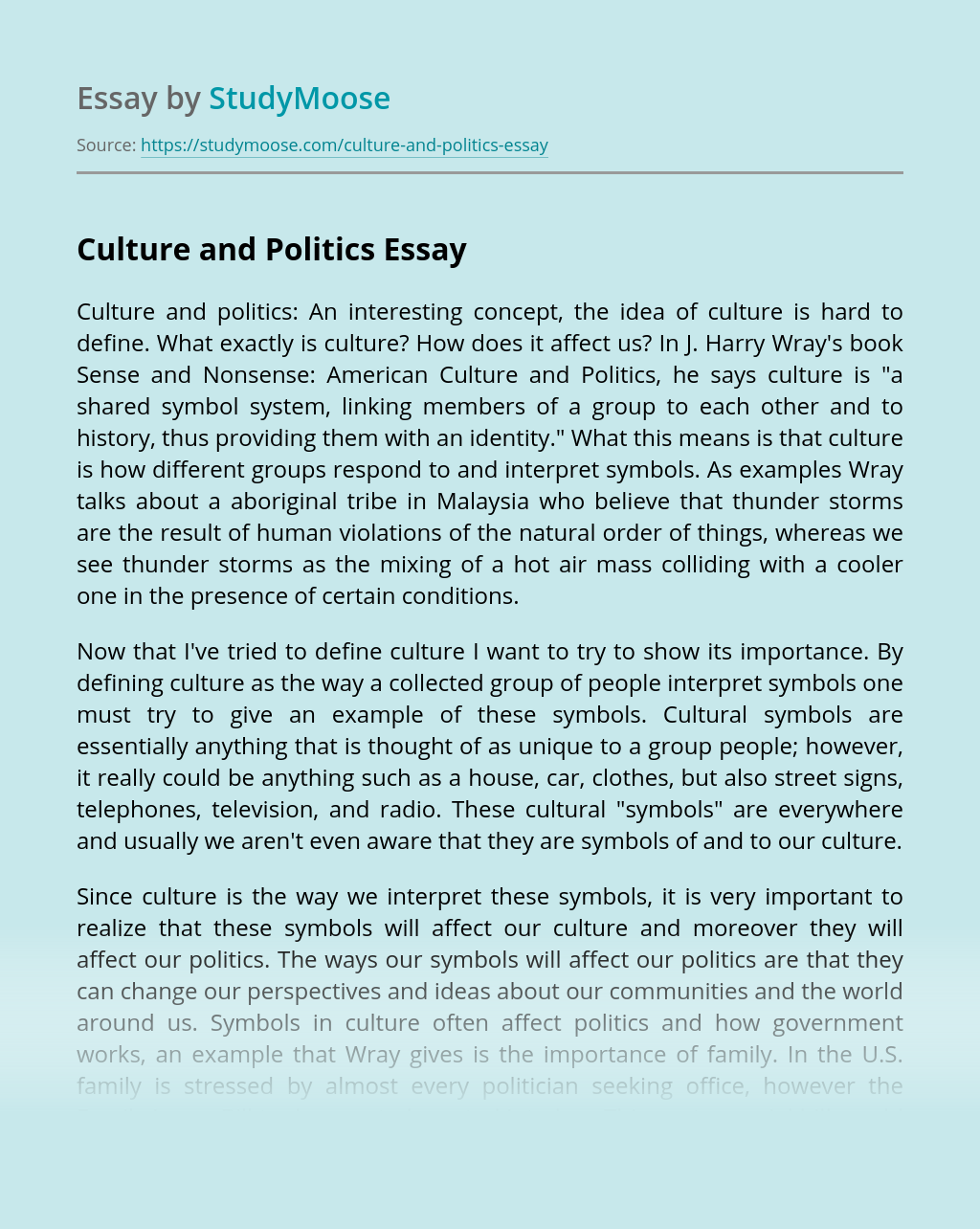 "The Mummy's Foot" by Theophile Gautier

The style of a story sets the mood for the piece. It is ‘the way in which an author writes and/or tells’ (‘Literary Terms’) their story. In this case, the stories are written in a Gothic style. This emphasizes death, horror, and high emotions such as fear and suspense. Edgar Allen Poe writes a story...

Hofstede’s five dimensions are a useful tool to give someone an insight of different cultures. These elements give a country’s behaviour tendencies rather than an exact prescription. There are weaknesses to Hofstede’s Five Dimension theory as it may too easily encourage stereotyping. Even in countries as small as the UK, not all citizens are alike...

The world is fast becoming a borderless place. Cultures, races, beliefs and ideologies are blend together and interact because of the growing advances in communications. In order to succeed in this world, one needs to be able to adapt to the various cultural differences as well as be able to maintain a certain sense of...

The book Parvana is about an 11-year-old girl living in Afghanistan, under the extreme Taliban regime. The Taliban ban women from going outside without a man and Afghan women are forced to wear the burqa at all times in public. Her family lost almost everything due to the bombings/wars in Afghanistan. Her father sells their...

View sample
A Complicated Conversation with William Pinar: A Reader Response to “From Autobiography to Allegory”