Cultural Literacy. What is it? How can one define it? Is it knowing the answers to questions such as: who are Joseph Stalin and Frederick Douglass? Who fought in WWI? What was the Louisiana purchase? What is the second commandment? Name an amendment to the constitution? Try this on for size, who is the host of Total Request Live on MTV? Who is J. Lo engaged to? Cultural literacy is knowledge of what one should know in order to be a functional member of an educated society.

Don't use plagiarized sources.
Get Your Custom Essay on Cultural Literacy Just from $13,9/Page

It includes an understanding of one’s language, grammar, pronunciations, syntax in speech, and the basic listening, reading and writing skills along with the knowledge of mathematics and history. Many argue whether cultural literacy is possible or not, whether it can truly exist. The whole concept of cultural literacy is an important one. Especially to America. America, being the great melting pot that it is needs to have this for everybody. We are constantly receiving new people into our country and as they come, our cultures “rub off” on each other, they begin to intertwine with another.

By understanding these different groups we understand their cultures and we become more culturally literate (to the other persons culture) and our cultures actually mix. America is great because of this. The concept of cultural literacy is an important one to understand in order to make America a better place to live for everybody. To answer the question of whether or not it is possible for cultural literacy to exist, we need to break it down. We have to know what it means and who it applies to.

We also need to understand how it works. The works of E. D. Hirsch, Jr. , “Cultural Literacy (excerpt),” and Jay Chaskes, “The First-year Student as Immigrant,” expose the definition of what cultural literacy is and how this definition varies as it comes across various cultures, groups, members and individuals in a society. Cultural literacy is possessing the information needed to be able to interpret a statement the way it was meant to be interpreted by an author or speaker.

Many things are open to different interpretations, though. Hirsch agrees, “? we cannot treat reading and writing as empty skills, independent of specific knowledge. The reading skill of a person may vary greatly from task to task. The level of literacy exhibited in each task depends on the relevant background information that person possesses (217). ” People who give this information are tryingto pass along a message. As long as one can receive that message correctly in most cases, they are considered culturally literate.

We can safely assume that everyone is at a different level of cultural literacy since everyone knows a different amount and has experienced a different amount. A good author or speaker is able to communicate his or her message to these people with different amounts of knowledge and experience and have the same viewers receive the basically same message. One may be considered “culturally literate” somewhere, then culturally illiterate elsewhere. You can’t expect anyone to know all the information needed to interpret something correctly.

But with what they already know, they can form a correct conclusion. Jay Chaskes, the author of “The First-Year Student as Immigrant,” supports this notion: As with all newly-arrived immigrants, students must learn various skills and acquire certain knowledge bases before the can be recognized as citizens of their adopted country (i. e. , they must successfully complete their first year of college). These skills and knowledge bases include communication skills, cultural rules and expectations, geography, performing as a “good citizen,” and learning the community’s services and structure.

(Chaskes 31) When students and immigrants first arrive they have some sense of knowledge and understanding of where they are and what is around them. Once they begin to adapt to their new environment and learn new skills to be seen as a member of their community, they become more culturally aware of their surroundings. With the knowledge they had and with the new information they attained the students and immigrants form “correct conclusions and assumptions. ” People have different levels of cultural literacy based upon experience and common knowledge.

For example lets take a closer look at Chaskes’ section on Professors and Academic Culture: Compared to their high school teachers, college professors may present a more aloof and distant demeanor. The student discovers that the rhythm of the professor’s work day may limit when he or she might be seen. The comings and goings of the professoriate seem somewhat inscrutable. (32) This culture of new first-year students are not used to this. They might be used to a closer relationship with their professors like in their secondary school where they are able to reach and meet with their professors at specific hours.

Everything is different now. It is not that the system of their previous school was wrong,it is just different. But once they become accustomed, they acculturate to this new college culture. Because of their previous experience, they were on a different level of cultural literacy. Basically different cultures are going to see things differently than another. Neither is wrong it is just how one culture interprets that specific thing. Some people might be more educated in one area and others in another.

Basic knowledge may be held by someone who have gone through many experiences, and because of their experiences they could understand what another is talking about. A different, well educated person might not get the idea as well because it is harder for them to relate. For example, in Hirsch’s excerpt, “Cultural Literacy,” he exhibits an experiment conducted by Richard C. Anderson and others at the Center for the Study of Reading at the University of Illinois in which they grouped two sets of paired readers.

These individuals were all similar in sexual balance, educational background, age, and social class. However, the only discrepancy was that one group was in India and the other in the U. S. : Both were given the same two letters to read. The texts were similar in overall length, word-frequency distribution, sentence length and complexity, and number of explicit propositions. Both letters were on the same topic, a wedding, but one described an Indian wedding, the other an American wedding. The reading performances of the two ? split along national lines.

The Indians performed well in reading about the Indian wedding but poorly in reading about the American one, and the Americans did the opposite. This experiment not only reconfirmed the dependence of reading skill on cultural literacy, it also demonstrated its national character. (Hirsch 220) This is a great example by Hirsch that demonstrates what actually happens in the real world. The fact that the Indian was knowledgeable about the Indian wedding is not surprising since he probably attended one. So, to the Indian culture he is probably considered culturally literate.

If the American had previously attended an Indian wedding he would definitely know more about such an event. He would be building upon his “Indian cultural literacy” by experience, which doesn’t apply to IQ (or fact knowledge). An equal example of how this would occur in the real world would be an Indian person who just immigrated to America. Let’s assume he can speak English already, but he has no previous experience in America. If he read about the wedding of the president he could probably understand the basics, but not the specifics.

The reason for that is because India has weddings and so he will understand how two people are joined together. If he had never heard of that he would probably be thinking what they mean by joining together. But assuming he understands that part of it, he might not understand that rings are usually what spouses give each other at weddings, or that, traditionally, Americans are making a vow to God when they get married. Although the wedding has two different meanings to two different people of different cultures, both ideas are still correct—like someone saying toe-may-toe, vs.

toe-mah-toe. It is just how it is interpreted from that individual’s culture and experiences. Since culture is the way certain people live, and everyone lives in different ways, no one can have the same cultural literacy. So even if we all posses the same knowledge, our differences in personal experiences set our levels of cultural literacy apart. One thing can mean something different to two people, but may be correct either way. It is just how that certain thing is deciphered by every culture. 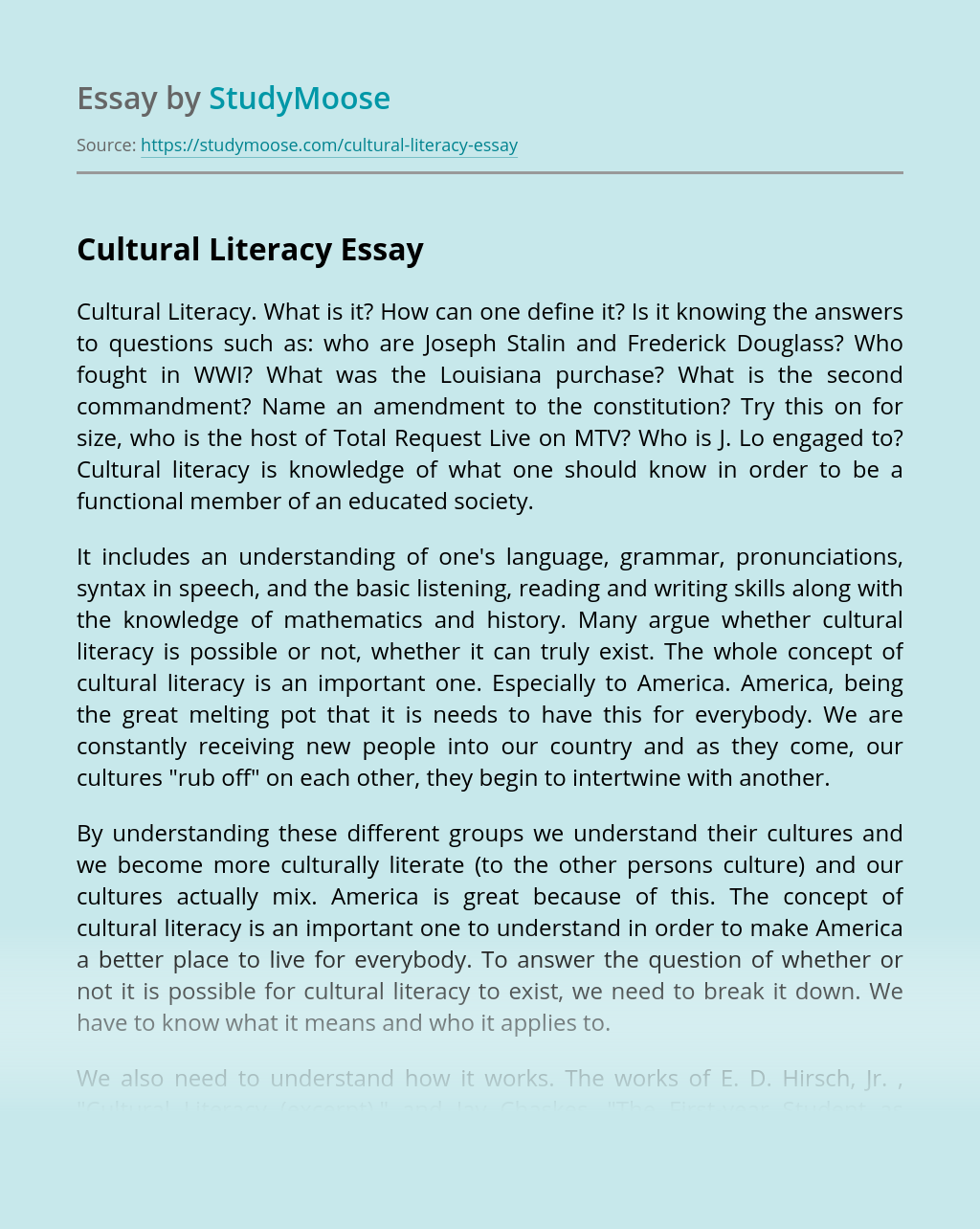 Amongst the many excellent movies of 2013, this one has to be on my top 5 list. Directed with passion by Stephen Frears, Philomena is a movie that concerns your beliefs regardless of which spiritual sect you belong to. As a little exposition, Philomena Lee (Judi Dench), method back 1952, was fertilized out of wedlock...

The Culture of Egypt is one of the most ancient cultures and has five thousand years of history. It can be said that it is one of the richest cultures of the world as ancient Egypt was among the earliest civilizations. Egyptian culture is known to have a significant influence on other cultures such as...

Through interaction with others on an everyday basis, we obtain the meanings, worths, standards, and designs of communicating” (Ting-Toomey). Culture can be specified as the cumulative deposit of understanding, experience, beliefs, values, attitudes, significances, hierarchies, religion, concepts of time, roles, spatial relations, concepts of the universe, and product things and ownerships acquired by a group...

Samuel P. Huntington shocked the world in 1993 when he published “The Clash of Civilizations” in the journal of Foreign Affairs. Huntington states “most important conflicts of the future will occur along the cultural fault lines separating these civilizations from one another” (Huntington 1993, 25). He claims future conflicts after the Cold War will involve...

David Suzuki is an award-winning environmentalist, scientist and broadcaster. He also dabbles in radio and television series that go into detail about the complexities of the natural sciences in an easy and fascinating way. Finish Intro Paragraph – any tips, mother? David Suzuki is first and foremost, a geneticist. He graduated from Amherst College in...